When you have to work over the weekend.

You don't need to feel sorry for me though! One of the things I did for "work" was to go with a group of folk from our churches to a Christian comedy night which was part of the London Pentecost festival. They are planning another festival next year and I hope to get to more stuff. The theme of the weekend was "the church has left the building". And so the comedy night was in... the Soho Revue Bar. NOw I like to think of myself as a fairly sophisticated person - even though I am a Christian and often those things don't seem to go together :) But I felt like a country hick wandering through Soho. It was very cool to sit in the bar that hosts Madame JoJo's nights (see I know what they are and that she is really a man and everything) sipping a cocktail (it was my treat and I was told to make it last as we can never afford another one) and laughing at some incredibly funny comedians who proved that you don't have to be rude to tell a joke.

Now I do like a bit of a rude joke at times but it is nice to go out and not feel so embarrassed (apart from getting to and from the venue). The comics were Jo Enright (who makes me look tall) Paul Kerenza, Andy Kind (the compere) and Milton Jones (who I was looking forward to seeing but just seemed terribly pleased with himself. Still funny though). It was a brilliant wheeze and there were about 200 people there which considering the club is about as big as my front room was no mean feat!

Sunday was a blur of worship and meetings but I did sit in the garden for a while. I was supposed to go in the paddling pool but hey, I'm a wimp! Yesterday Sue H came round for a crafty play which we haven't done for aaaaaaaaaaaaaaaaages. Mostly because I spend a lot of my Monday's at Imagine That. We had fun making cards and cooing over new goodies. While sweltering in the heat of the conservatory.

I made a thankyou card that Hywel commissioned for the Christian club leaders at school. 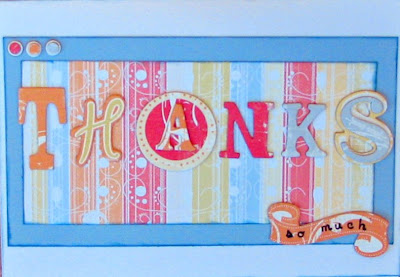 (the colours are a bit off as it is actually a white card base!)
then a card for Phil's birthday - until I remembered I have done him one like this before (cos I love this simple way of using up scraps) 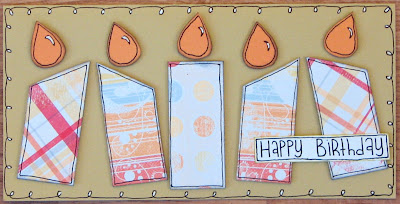 I started the replacement card (which you can see on Friday) and also made an anniversary card for the end of the month which just happens to fit with the Daring Cardmakers little extra dare for today...
This time we've chosen the 3rd Anniversary, so you have the choice of
Paper or Clocks
Sue brought round her rather lovely clock images - she used them on her card roo but the end result is quite different. 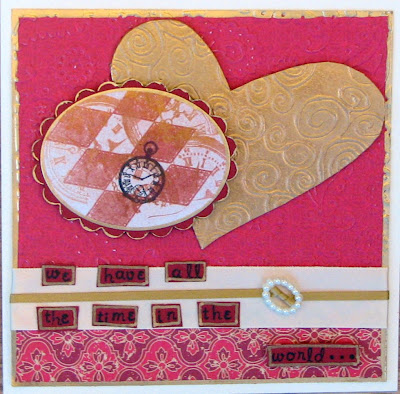 I used a cream square card and some Self Addressed kit papers (can't remember the name of the company just now). The red paper was put through a paisley cuttlebug folder. A grungeboard heart was trimmed down and painted with a gold dabber. I stamped a diamond background stamp with versamark and swooshed art from the heart powder over it and then did the same with Sue's clock images using gold instead. Then added a final clock in black. I cut out the image using nestabilities dies.

As I was doing this I started humming the Louis Armstrong song "we have all the time in the world" and thought this might make a good sentiment rather than happy anniversary. the words were stamped with one of the £1 alphabet sets. then everything was kryloned. I thought the band of cream ribbon looked quite bare so added some thin gold ribbon threaded round a little pearl ribbon holder. 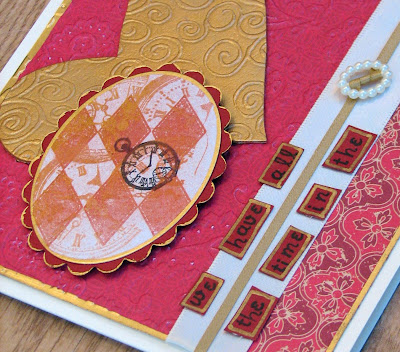 I wonder if Phil will twig it was for a dare? Well as we rarely send each other anniversary cards I think so!
Posted by Lythan at 9:57 am

Saturdays events sounded great (a friend from church was up there and was 'going on' about it on Sunday). Love Phil's card (and look forward to seeing the other one). Glad you and Sue had a good get together.