Grab a cup of tea and put your feet up

'Cos this is a long 'un!
Well there is a fortnight to catch up on. Doesn't time go fast over Christmas?

Here are some of the highlights of the season
* the tree in her full tacky glory! 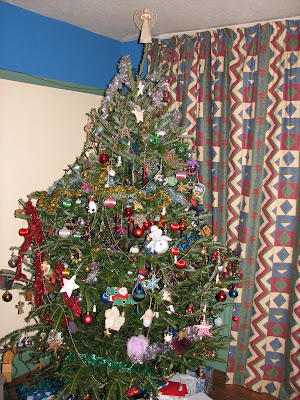 * the joy of the pyjama service (Christmas eve, me and the little kids from Church dress in our pj's and bring cuddly toys and I read a Christmas story and say a prayer. It is just brilliant)
* the anticipation of Midnight Mass
* the Christmas table decorated in a posh manner (first. time. ever.) (maybe last) * the 6 dogs getting on well (only 4 in the picture. there were actually 3 collies, 2 Tibetan Spaniels; 1 greyhound. And a partridge in a pear tree) 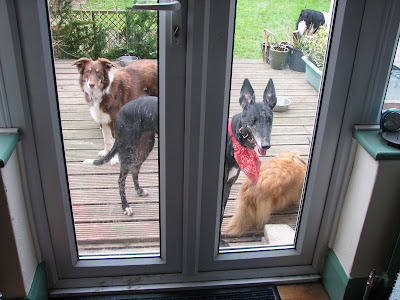 * the extreme excitement of a cage for Guinea Pigs (they arrive tomorrow. there are 120 rescue GP's to chose from. Only 2 are allowed here) the one in the cage is a cuddly toy. What a surprise that amongst the 3 million soft toys owned by Carys one is a GP) 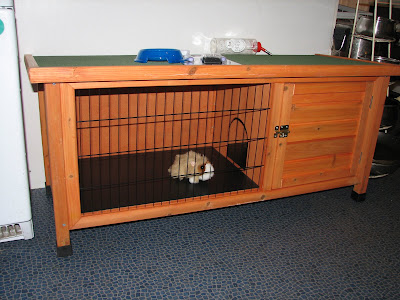 * presents all going down well. lots of fun and laughter and love. my present was to have my marathon cross stitch framed. it was a complete surprise and looks great. But I haven't taken a photo yet...
* Phil's family leaving on Saturday and mine not arriving until Wednesday giving us some time to be just the 5 of us. even if we spend a lot of it in different rooms.
* Going to see the 39 steps at the Criterion. V. expensive for us but a complete hoot. the kids had never seen the story and we stopped them watching it on tv the day before, but I think they need to see a thriller version now to get all the jokes. this was a 4 hand comedy and was just amazing.
* Spending some time crafting - magazine work that had me v. afeered as I didn't really feel up to the task. But quite pleased with what I have done.
* Getting a new year hug from the family. Watching the first series of Outnumbered together while we waited for midnight.
* Receiving my copy of Docraft Creativity with a two page article by ME! in it.
Which included this layout featuring Carys. 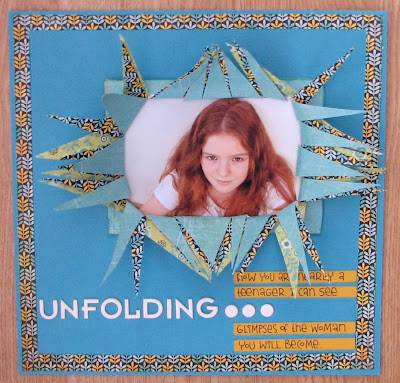 When I showed it to her she said "nice" When I asked if she wanted her won copy to show her friends she said "not really no" Which burst my big head and has made me giggle at my own ego ever since.
* making cards for this weeks Daring Cardmakers Challenge. Oh how lovely to say "must just go and make a card" and escape for a while! (yes hostess with the mostest I am)
And the theme was, naturally - thank you cards. Which I will use as samples at the church card club tomorrow 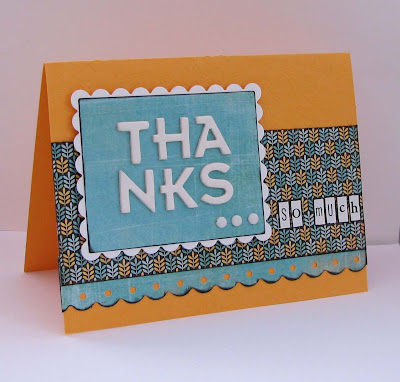 OK so I made that layout in November. Hww funny it looks almost the same as this card :)
Some of the elements are the same - Basic Grey Urban Prairie Papers. but the card uses the pad not the 12x12 scale pattern. And BG chipboard letters (other letters are Making Memories). The cardstock is American Crafts embossed card. I decided to buy a pack as it is 81/2 x11 size which means that cards made using it should fit into the Cuttlebug embossing folders. I am also trying to force myself to use coloured card bases.
And I managed a whole two before going back to white :) :) :) 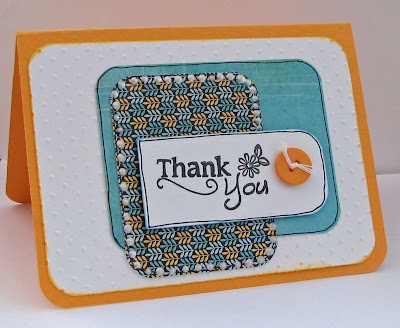 BG papers
Stampin Up white card
Swiss Dots CB embossing folder
Imaginesce stamp
BG button
LIquid Pearls
(funny thing just happened. I couldn't remember the name of that stuff. Knew it was made by the same company as do Stickles and that the colour was opal. So stuck them in google to see if that helped. Apparently there was a woman who died June 22, 2007 called Opal Stickles. So there you go) 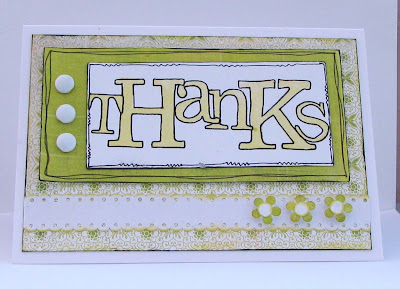 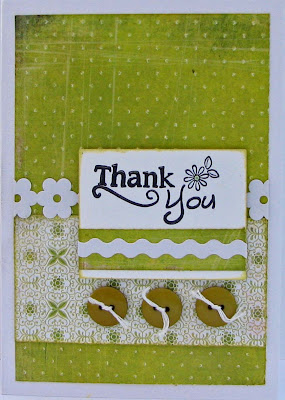 Same things as before but in a different order!
in the middle of the flower is the teeniest weeniest gem. A great find in poundland under then nail decoration section!
Posted by Lythan at 4:30 pm

I love all your thank you cards, particularly the last 2 green ones as they are my favourite and best colour :o)

Sounds like you have had a busy but fab Christmas. Happy new year and congrats on the mag work - will have to go buy Creativity...

What a treat to see so many lovely thank you cards - saw the one on DCM and loved it - then came here and discovered even more! And the LO of Carys is beautiful - love what you've written - must look out for the Docrafts mag. Happy New Year to you all. x

Gorgeous cards (and LO), Lythan. The yellowy/orangey cardstock goes so well - maybe you'll revisit non-white backgrounds again!! I've been reading your blog for a while since I started looking at DCM, but have only recently started blogging myself. One of these days I may even post a card on DCM :oO Happy New Year!

Just popped back to say I got the mag today and your article is fab :o)

My mum is also very impressed, particularly when I said I know her I know her lol!! (she card makes too).

Brilliant Lythan - love your layout and cards. :) Sounds like you had a great fun packed Christmas and YAY to the mag work! :)

Hi Lythan, thanks for the lovely comment you left for me earlier it's much appreciated. Your post is brilliant and really made me laugh. Loved reading about your Christmas exploits and your cards and layout are so stunning! I think you should use coloured card bases all the time LOL! Chris x

Some lovely cards and layouts - looking forward to seeing the cross stitch.

Hi Lythan, thanks for the lovely comment you left for me. I love your cards and layout but most of all, I love your humour, ever considered doing a take on Bridget Jones' Diary? :-)
Jen x

What a fab post, Lythan - it's been great to catch up with the goings on in the RevNev household.

Fab LO (congrats on being published - so funny about Carys's reaction). The Thank Yous are all wonderful - I love your use of colour and design on these.

It's great seeing all the family over the holiday, but it's also great to reclaim your home and your "normal" life when they leave, eh?

Hello again Lythan, its me again, just to say I've read on Kaths blog that youre going to be on the DT of Funky Hand, so just wanted to say congrats and well done and look forward to seeing you there.
jen x

Hello Lythan
Could you revisit your page re the story of Xantippe and read the comments from supergran. The coincidence is intriguing and might be worth following up.
Louise