Happy Unbirthday to us!

or maybe it is extra Christmas!

there has been a flurry of spending chez Nevard. Phil had some Christmas money and I had some gift and craft work money to spend so we have bought a new DSLR camera. A big one with a removable lens and everything. Bit scary really! We have bought a Nikon D60. And a few props to help us take better photos - I hope.
Before entering the world of digital we did have a SLR camera which I loved using - we still have it and I might just dust it off and take black and white photos with it. It is, sadly getting harder to get films developed though!

We have also - well not so much Phil as Carys and me - bought a Herstyler to make curly hair. Carys' hair used to be really wavy but is less os now. It is like mine, some days curly, some days straight. They demo'd one of these on her hair at the local shopping mall but I found one on the net for half the price. Sweet. So here is a combo of Carys' new hair, our new camera and the collage tool I have just discovered on Picasa (which is free!) 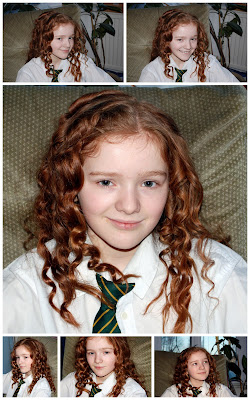 I have also bought two new big girls bras but I won't be modelling those on the new camera...

It was my turn to host the Dare on Daring Cardmakers this week. So I went for what I love - patterned paper.
Patterned Paper Passion
I want to see 3 different patterned papers on your card.
And to be extra daring, why not see if you can use 3 different lines of paper!
But oh what a palaver and kerfuffle I have had! If you recall last week I showed off our new hall floor. Well we have kept the hall empty as it is going to be painted along with the conservatory where I keep my craft stuff. We thought they would start in the hall. We had a message Tuesday night when we got back from a meeting at 10:30 pm to say they would start in the conservatory at 9 on Thursday morning. EEEEEEEEEEEEEEeeeeeeeeeeeeeeek! I would have to tidy away all my craft stuff, and I was going to be out most of Wednesday. And I hadn't made my card. So I quickly made my card.

Wednesday I found a bit of time to pack up the room. My plan was to move my craft table and some of my bits upstairs so I could still craft. I started packing a box or two. then Phil snesibly said that if we left the craft table there then all the stuff could be stored under it. So I put it all back.

And then remembered that I hadn't got my card out. And couldn't remember which box it was in. And everything was piled on top of everything else. In the end, being stubborn I took out all the boxes until I fuond the card (bottom box of course). Hurray! But somehow (I suspect from my fingers, the usual culprit) there was blue ink over the crisp white stamped image. Disaster!

My dear friend Sue suggested photoshopping it. So I have to confess that the image on DCM is a fake!!!!!!!
This one here 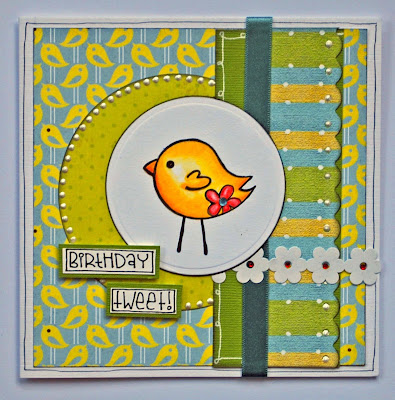 if you look really carefully you can see where I have masked as the lovely embossed circle just disappears. In real life I have gone for the chicken pox option. Would have been better if I had not run out of these gems but remember, I had to pull these out of the box as well. As they are self adhesive I might end up trying something else as I do want to save the card! 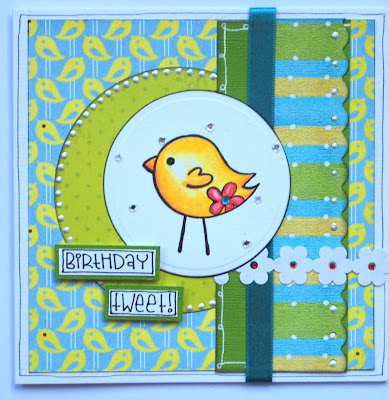 I managed to get the colours better on the fake too :( )

Anyway, what papers did I use?
Firstly the card. It is a white square card. It used to be a Christmas card. I made about 15 too many and wondered what to do - then I decided to recycle! the papers are
Basic Grey Offbeat Carefree 6x6
Scenic Route Bellville Crosswind (large circle)
A2ZSolar flare stipes and ginghams (strip)
Also used... Coredinations cardstock; Anitas teal ribbon; Doodlebug paper trim; Anitas gems; a lovely stamped image that I recieved in a Funky Hand swap and then cut through the name on the back so I couldn't read it; Liquid pearls and lots of doodles.

Must go and make the painters another cup of tea!
Posted by Lythan at 9:47 am

How cool are those shots of Carys! Great camerawork and effective use of the hair curlers. As for the DCM card, wouldn't have known about your cover up - love the bright colours and the papers tone so well. At least you managed to rescue the card. Hope it's not too long before the decorating is finished and you can get back to normal. x

Disaster or no, I really like the colors on your card. :) And I'm a sucker for birds--especially little cute ones!

Oh Lythan, you’ve just given away my secret…..now everyone knows that my cards are all fakes that have been touched up in Photoshop. Lol!
Not so really but it does help in an emergency. I’m pleased that managed to sort it out in the end.

The card is great by the way, so bright and cheery and a fantastic use of the papers.

Love the photos of Carys too. Her hair looks beautiful.

I'm so glad Lythan that you managed to find your card in the end it's gorgeous.

My cards just usually have stippling or more embellishment to cover up my grubby finger prints.

Gorgeous card, Lythan. I would have difficulty using those zingy colours - especially when using different lines - you've combined them beautifully. Lovely "Spring-y" feel to it!!

Gorgeous cards, fake or not. I think the birdie was a snag em stamp from Kath. Love the new hair do on Carys what fabulous colour hair she has, a real Titian beauty.
hugs
En xx

Great stuff!! But not so great about the packing stuff away - I know the feeling and you can never find ANYTHING!!!!!!!!!!!!! Hope it gets better!