ok
So the hall floor went from this 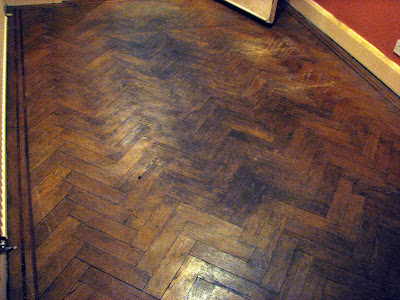 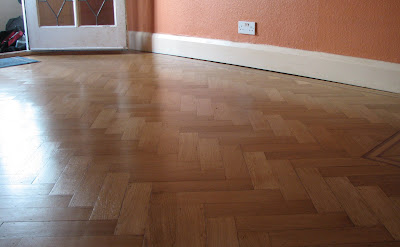 yesterday. (Hmmm must wash that door down)
and while that happened I camped out in the conservatory, did some stash sorting, a sermon and a few cards - just cos!
The first is my version of the card Sue made for Daring Cardmakers. Actually the proportions work better on hers I think! Do love the WRMK nonsense line though. 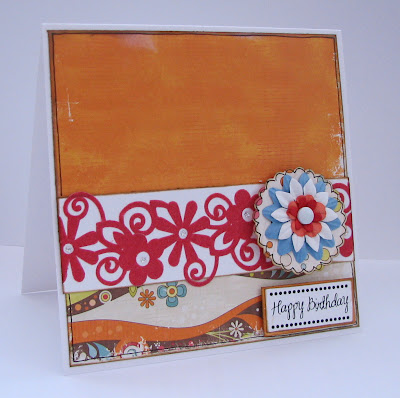 the second is because someone was becoming a member of our church today through transfer of membership so I wanted a welcome card. 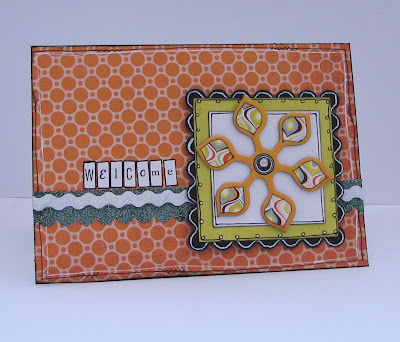 The black (ish) paper frill started out grey but I wanted a black one. I considered using a sharpie pen but went for chalk ink instead. Bad, bad, bad idea.
Why?
The other funny thing about this card was that I bought some stuff for church card club from the Docrafts sale and a few Basic Grey bargains went into my basket for me. Bits to go with the latest 6x6 pad I had bought to make some quick fun cards. Only... I bought Offbeat accessories for an Urban Prairie pad. So have now had to buy the Offbeat pad ruling out any bargainosity all together! (ooooh blogger hasn't underlined bargainosity, is it a real word then? Oh no just put the big spell check on and it is just that the underline version wasn't working. Still, like it, use it) 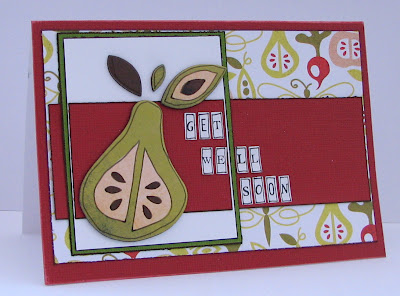 maybe I'll write "sorry you are feeling pear shaped" inside...
the letters are Making Memories. They are my favourite craft item ever.
The latter two cards had to have something laid over the whole front because I ruined two cards by putting chalk ink as an edging for another piece of paper on a card and leaving ink stains all over the place when I had to move said paper as the placing was wrong. I think I am going to have to lock that black chalk ink away. I'm not safe with it!
Posted by Lythan at 1:25 pm

Great cards, particularly the pear one. Your member is fortunate to get such a lovely welcome card (the one I got at church was printed and functional!). Well done for persevering with the chalk! Cheap hairspray is good for setting. x

Gorgeous cards! I love all the bright colors you used.

Hall floor is looking fab! I think the pear card is my fav one. It is amazing how far ink, chalk or otherwise can spread :) x

Your hallway now looks wonderful. I'm sure it was worth the little bit of clearing and inconvenience you had. As always all your cards are great. I don't have much luck with ink either..it's always all over everything. But I feel it just makes me more creative with embellishments as they have to cover all my inky mistakes!
Anice xx

I can’t believe that’s the same floor Lythan, it’s come up a treat hasn’t it. Well worth the disruption I would say.

Love the cards you made while you were confined to the conservatory. I think the welcome card looks great but I can just see you pulling your hair out with all the mishaps…..mind you, you didn’t mention glitter ending up over ‘everything’ so it couldn’t have been that bad!

I forgot to say yesterday how lovely the floor looks x

Lythan, those cards are all brilliant - I can't pick a favourite - and I hope all the black ink debris is gone now!!

And the hall floor is magnificent. Must have been a bit nerve-wracking hoping that the job would be a good one when they were working on such a lovely old floor. Relief all round, I'm sure.

Oh my word! That floor is to die for, a proper parquet floor. I am so green with envy. I have to make do with my laminate. Hmmm... new houses eh?

Gorgeous card as usual. Love the way you transformed that floor aswell!!! Gorgeous!!

wow, doesn't your hallway look amazing?
Thanks for making me smile with your inky tale of woe, it's so good to know I'm not the only one....

These cards are fab, Lythan - I love all of them and especially the pear-shaped one.

I didn't even know there was a spellchecker on Blogger