Daring card done - tick! (actually choice of two. Cos I didn't like the first one)
Salt layout done - tick!

Virtuous feeling slightly marred by dog with v. upset stomach. Will say no more but I am sitting in a very smelly room at the moment...

Let's do the catching up first. The Salt challenge theme this time round is
Mercy
I (Esther) have been reading through the book of Judges recently, and have been struck by the way God is so merciful to his people despite their continued sin. The people of Israel; time after time turned away from God and turned back to their old ways of sinning- does that remind you of anyone? Yet despite their actions God still showed MERCY!
I thought about this a lot, trying to think of what aspect of mercy I wanted to depict. In the end I decided to focus on one of my favourite Bible passages from Micah which actually is about how we too need to show mercy in our lives - part of the response to God's love to us. It fits in really well with a book I have just read that has had a profound effect on me. It is called the Shack

the blurb reads...
Where is God in a world so filled with unspeakable pain?
The pain in this novel is that Mackenzie Allen Philips’ youngest daughter, Missy, has been abducted during a family vacation and evidence that she may have been brutally murdered is found in an abandoned shack deep in the Oregon wilderness.
Four years later in the midst of his Great Sadness, Mack receives a suspicious note, ostensibly from God, inviting him back to that shack for a weekend.
Against his better judgement he arrives at the shack on a wintry afternoon and walks back into his darkest nightmare.

I won't say any more because it would spoil it. but it is really thought provoking. And it underlined for me the importance of acting justly, loving mercy and walking humbly with God. And just how much God loves us.

So for my layout I wanted a photo of some of the family walking. This proved harder than I thought because I have loads of photos of the family walking in front of me. but they are all on a corrupted hard drive that Phil is promising to fix! So I used a photo from our New years Day walk. it is a bit blurry because Phil kept running ahead of us. SO I converted it into black and white so it didn't matter quite so much. I would rather we weren't all smiling - living God's way is serious business! but there we are.

I will just show you the original and why we were smiling. 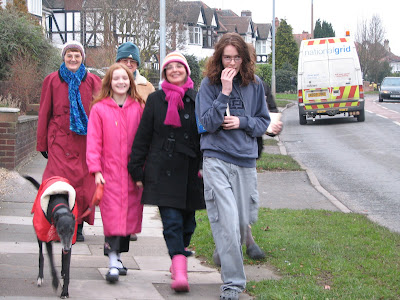 It is New Years day. Freezing cold. Hywel is eating an ice cream sandwich. Emrys is walking just behind him. Reading a book. Hywel has a book under his arm which he started to read when the icecream was finished. Mad family.

I decided to make the layout on a transparency because... well I fancied using the transparency! It is from Fancy Pants About a Boy, as are all the papers. Transparencies are hard to photograph so here it is with a wood background and a white one. You can see my shadow on both! 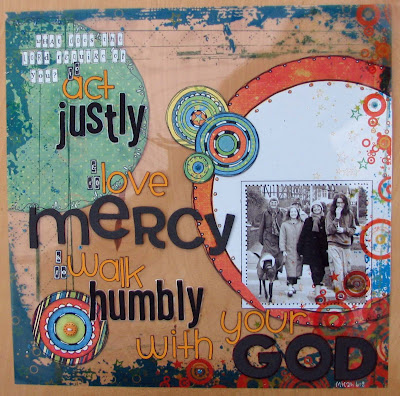 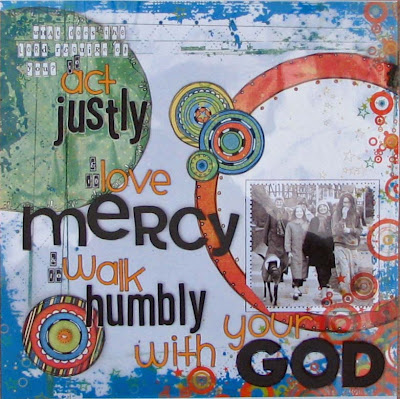 Daring Cardmakers this week has gone all lovey dovey.

Give it some Heart.

feel free to make a card fitting any theme you like as long as it has a heart somewhere on it.

I didn't like the first card I made very much but I'll show it here anyway cos it took ages. 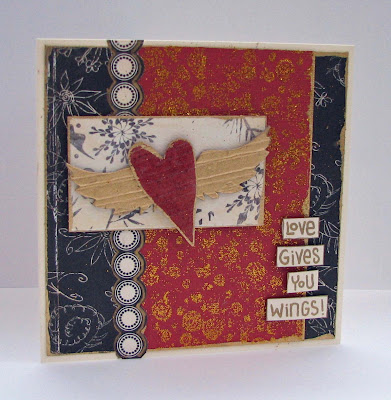 Cream square card; Crate Paper Avenue papers and die cuts; Grungeboard heart and wings. Wings coloured with a krylon gold pen and the heart with red distress ink. Some red Coredinations card was stamped with a Squiggly Ink stamp and Versamark and then fine glitter was sprinkled on the top. One of the problems with the card is that my Krylon pen either doesn't work or leaks. And I don't like the handwritten sentiment. May have to rescue it but not sure how.

So I whipped up this card as an alternative. 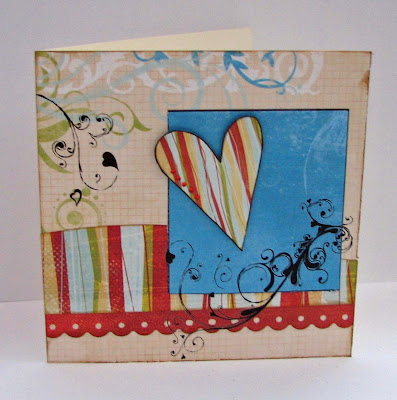 This is on a cream square card and once again uses Fancy Pants, this time the Daily Grind selection. The heart is from the 12x12 cardstock and the rest is the 8x8 paper pad. The heart was on a little card but I cut that down and then cut it out altogether! I used my Threading Water punch (why is it called that?) and added some Basic Grey rubons and some tiny Anitas bling. And no sentiment just in case. Will probably end up being a useful "with love" card.

Right off to spray more air freshener around the room...
Posted by Lythan at 10:00 am

Such a lovely LO for the Salt challenge - very thoughtful rendering of that verse. The photo is great (even including Lucky - not so lucky today - for you either ... hope the air freshener's working!). As for the cards, I can't see what was wrong with the first one - they are both great. x

love the contrast of the black and white photo. That transparency works well too! Some great textures on a serious subject. Thank you for your input :)

I love coming onto your blog and getting a little insight into your families day to day life..the walking photo is great! I didn't realise that DCM was heart themed today..I have blogged today with a heart card maybe I should get over there and join in! I love both your cards as I always do.
Anice xx

Lo is wonderful - clever of you to use transparency for that one - it looks great. I love both cards but I must say I like the rejected one best. so there!

love all your work, well done

What a wonderful LO Lythan, and why shouldn’t you be smiling.
Your photo certainly made me smile and it just goes to prove that no matter how cold we are a smile will always warm your heart. Can’t help thinking that it’s a bit strange taking your book so you can read while out walking though!

Love the two DCM cards too, especially the second one.

I love your first card very much the second one is beautiful too,thank you so much for dropping by my blog and allowing me to share yours
Wendi

Absolutely love the layout! The B/W photo looks great and love the thought behind it!
Beautiful cards too! Love the papers on both and the swirls on the second one!
Blessings, Maria

Beautiful layout...I really want to get into scrapbooking, have only made 2 pages ever but it's sooo timeconsuming. Suppose it is priceless...oh, that will be my new years resolution for next year! Lol...have a good week.

This is wonderful Lythan, both the layout and your random thoughts. I have sent the link of your blog to my sister (Baptist minister), she will love reading it. And all your family's Welsh names, why did I not know that.............
hugs
Enfys x

Lythan, this is beautiful! Love the colors, the lettering, everything!