Hello my name is Elton

that is what Phil calls me whenever I get a lot of packages at once through the post. Its from the old Royal Mail ad with Elton John from a few years back. Incidentally did you see Top Gear on Sunday night? I may moan about the price of a stamp going up but 39p got a letter from the Scilly Isles to Orkney overnight faster than they could drive a letter there. It went on palnes and everything.
Incidentally 2, we are often out walking the dog on her bedtime visit at midnight (yes, I know) and a Royal Mail truck passes us about the same time every night. It kind of makes me feel that all is right in Britain...

Anyway. I had two parcels yesterday. Which was nice. And one was a prize. Which was even nicer! I won the card challenge on UKScrappers last month and the prize was a Crafty Templates card kit. I got down to using it straight away.
It first appeared on a layout.
This layout is for Twisted Sketch 5. I love these sketches. I think it is because they are simple enough for you to add your own details too but there is plenty to get you started too. I think I am quite a linear scrapper. (oooh hark at her!)
this is the sketch 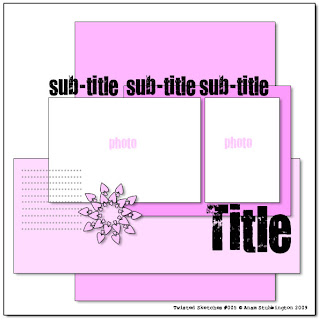 and the twist was to use fabric of some sort. 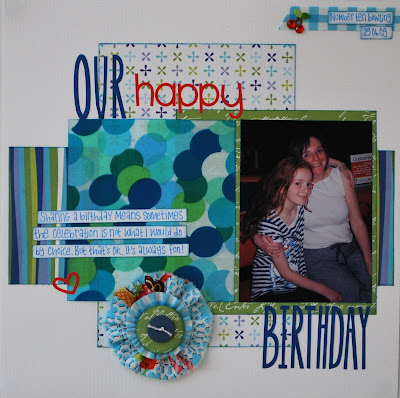 The starting point for this was the dotty see through stuff on the left of the photo which is fabric paper that I have had for eons. I found it went well with Scenic Route Brighton papers. Then my eyes fell on the fabric rosette in my parcel. Score! I took the gingham ribbon off the bottom and stuck it in the corner with a cute cherry brad from the kit and added a flower centre. It helped solve the problem of lettering as I didn't have the letters for Happy Birthday in the blue stickers (another ancient bit of stuff used) but found some red doodlebug ones instead. The heart is from there too.
Obligatory close up of the lovely rosette. It is not supposed to look like a clock at 10 to 4 thanks PHil. 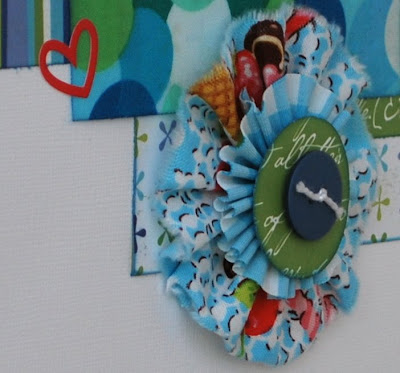 Next I wanted to make a thank you card to say thank you for the parcel. I need a thank you card for someone else so they will get it. It is a symbolic thanks to Leo at Crafty Templates
I used a 2Sketches4U sketch which I haven't done for aaaaages. And this card took aaaaaages too. It started off as the green card! But I prefer the white background as it is sharper 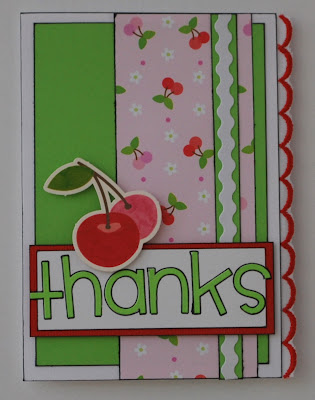 the fabric scallop, the cherry paper and green card are from the kit. The red card is American Crafts and the letters are Doodlebug. Having used my cherry brad on the layout - I remembered I had a cherry die cut in my October Afternoon stash

My other parcel was a Gotta Craft kit. Now these always launch of an evening and I am usually out and by the time I remember they are sold out. But I got lucky this time! It is a Kraft based kit. Which, seeing as I love scrapping on Kraft, I had to have. (thinks back to those days 18 months ago when she went into artbase asking for Kraft bazzill and the man looked at her like she was mad and offered a paper bag...)
This took no time at all 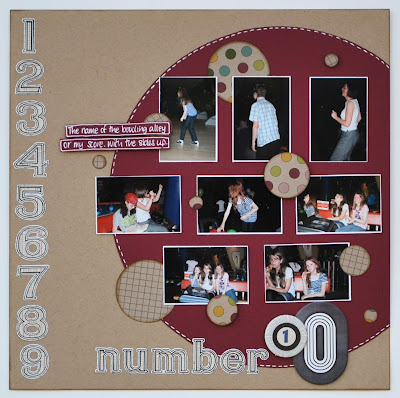 I used a technique tuesday circle template to cut into the burgundy bazzill and a range of circle punches for the patterned paper. Lots of inking and white pen. The chipboard numbers are Sassafrass and the letters and numbers Jenni Bowlin. These came from the Studio Calico kit I won (I'm on a lucky streak!). Those Jenni Bowlin stickers are well worth having as there are sooooo many. As you can tell if you look back through my layouts. They are well used but still loads left.

I have actually done some other crafting as well but can't show you that yet. I've had a weekend where I have had time to play. Sadly that is over and it will be a while now so I ahve made the most of it!
Posted by Lythan at 9:04 am

oohhh both of your layouts are just stunning. I'll be visiting your blog more often.

ooooh what a lotta lovely stuff you've made!

Love the look of that kit - I keep forgetting to check that site out.
Well done on winning the CT goodies. I've got one of those rosettes still to use, can't decide how, but love what you've done with it.

Oooh, these are all fabulous! I love that top LO with the fabric flower, and your 2S4Y card is fantastic--I'm a sucker for cherries! ;)

Well done on your win :)

I watched top gear with josh and had to stiffle a chuckle at the not so random road sign that they snaffled in - didn't really want to explain that one....

the papers on your card look really good, v retro :)

Fab-U-lous! I love it allllll!

OMGoodness what a darling card! The cherry theme is so cute! Thanks for playing at 2S4Y!
Laura

Wow lots to see here love it all and thank's for playing at 2S4Y.

Lovely card! Cherries are really a hit lately. Love your take on this sketch.

Darling card!! And the l/o's are super! TFP!

such a cute card and absolute fabulous los!!

Thanks for playing along with us