I went to Carys' prize giving assembly today. It is great when a school recognises the progress its pupils have made and invites the parents along. And I can't think of a way to speed up the process - but an hour of clapping kind of gives me RSI. And more to the point. Who put those teeny tiny chairs out so close together. I got to know the people I was sitting next to very well and was just starting to wonder if I would faint (has been known) when someone left and we could spread out a bit. We were thigh to thigh before that. Still it was impressive and as teenagers get a bad press it is good to report that at least at Gaynes school they do a lot to be proud of.

I also bought a copy of the school mag "shine" - really just to wind Emrys up as he thinks the name is appalling. I'm glad I did as Carys has her photo in twice along with a quote about owning a greyhound "they are very docile and don't need a lot of exercise" (although when they go for it they are fast as Richard Hammond found out here) We don't let Lucky go off lead that often as it needs to be somewhere we are confident she will come back - but when she decides to run it is a wonderful sight. 10 minutes later she is puffed out and ready to come home though. The school article also said that there are more black greyhounds needing rehoming as people prefer the other colours. I'm amazed as I think the black ones look the nicest. So if we do ever get another dog I know what colour it will be!

Right then on to my Daring Card for this week. We are Away with the Fairies!

I had several ideas but as Hywel has finished college for the year and took over my computer yesterday and was having a World of Warcraft battle/hunt/knitting contest, several were rejected as I needed to print something. Then I remembered Carys' stamp 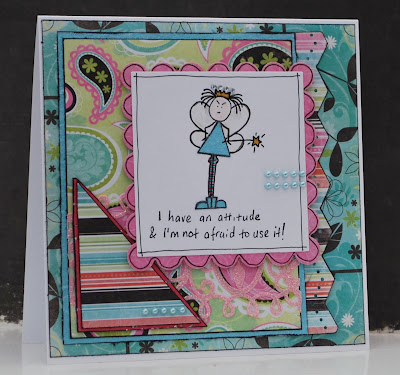 Sadly, she has lost any thoughts of crafting as I quite enjoyed her buying her own supplies that I could use...
Most of the papers on the card are WRMK Tiffany collection. But I have also gone retro with some of the products. Papermania have brought out silky metallic mulberry paper and handmade paper with silver drops on it. I was lucky enough to be sent some to do a project with and the colours are gorgeous as you can see. I love this hot pink and turquoise blue! I haven't used mulberry paper for YEARS! I haven't done the feathering with it yet - must give it a go!
I also used square nesties; a Martha border punch; my new sparkly pens; some teeny gems and pearls. The pearls may have been added to hide a pesky mark but I'm not telling! The dress and boots were stamped onto the metallic mulberry and cut out.

And there she is! I have a friend who is a wonderful head teacher who I am going to give the card to for her birthday. She will either laugh for ages or never speak to me again!
Have a magical weekend. I have a busy one and somehow have to fit in packing for the kids to go away for a few weeks so crafting is going to have to wait until they go on Wednesday. Sob! (for the kids going not the crafting. OK a bit of that as well)
Posted by Lythan at 10:13 am

LOL to the chairs - I think teachers do it on purpose, to have a bit of a snigger!

Your card has really made me smile Lythan.

I love all the bright colours and the doodling……absolutely wonderful!

I love this card, so bright and funny too!

Tat is one fab stamp! I hope it's found its way into your drawer seeing as Carys doesn't use it!

What a great fairy~I suppose even fairies are teenagers once, too. ;)

Love this card Lythan, the image is supercute. You could always buy her stamps you like for her birthday and say it was to rekindle her interest:) I'd forgotten about the tiny chairs.... oh yes, memories
luv
En xx

Well your card and your post has really made me laugh, what a tonic. Fantastic fairy, I need her. lol!! Do we have permission to dig out the mulberry paper then? :D

Im sure your friend wil love the card, reminds me of someone lol.
great card I love it
Debs

That stamp is so fab, the comp here is quite often set to WOW and more recently Free Realms.... I am sure that your friend will love the card :)

I do love that stamp its so cheeky
AllisonX

Love all the bright colours and the little stroppy fairy is just brilliant! :)