1: I would have shown you a photo of Carys looking smart before school but I took one photo before I noticed she looked like a bag of chisels and then the battery died... 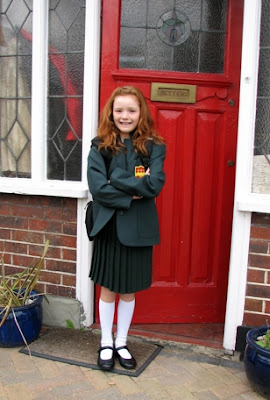 When we got married the Church caretaker was one of the groomsmen ( we were close and thought it would be nice to give him a more important role than he normally had.) Anyway he looked at Phil's brother who was slightly dishevelled in his morning suit and said to him"you look like a bag of chisels" - a phrase we still use as you can see.
Though I did get one photo of all 3 together than I have entitled "the band" cos they look posed

2: I would have told you about the fun I had with Sue Hyde at Barleylands craft village yesterday if it didn't shut Mondays. I have now double checked the website and can't see "closed Monday" anywhere. So I spent my pennies at Imagine That instead and bought some new BG pads amongst other things. Yum!

3; I would show you the card I made for the Little Extra but I gave it to Sue for her birthday on Sunday and told her by mistake so to see it you have to look here
I'll describe what I used so Sue - go to point 4 immediately. Actually you know what it is (sad news) so you can leave here. Bye!


I said BYE!
Hopefully she has gone now
Its the white square one (no surprise there). Sue is such an awesome card maker and made me a beautiful card and coaster book for my birthday so I get really nervous trying to make something worthy. (And just after it is Kathy B's birthday. Terror!) I remembered her favourite colours and my eye was caught by a little sample I did for my embroidery course before I had to give it up due to ill health. I discovered that you can paint onto chiffon so the background is painted using lumiere paints. Then the flower is appliquéd layers of chiffon on top. The paint makes the chiffon cutable (is that a word?) but I also mounted it on acetate to stick it down better. I added a few brads for stability then doodled on some photo corners. I doodled round the edge of the material too - I think it looks like machine stitching (but neater than I can do!)

4: I would tell you what Spot the chicken got up to today but sadly she died yesterday. It wasn't a fox - but Phil noticed she wasn't right and very light - hens hide illness in case they get driven out by the flock. She went into her nesting box in the afternoon and didn't come out again. Which leaves Mrs Miggins on her own - and chickens are not solitary birds. As it happens Phil and Carys are going on a chicken run soon so will now bring two ex battery hens back with them.

Carys says I can call one of them Windell Poons which is one of the best names ever - from Reaper Man by Terry Pratchett. Windell is a wizard who becomes a zombie - and as the hens kind of come back from the dead I think it is suitable. The boys don't know yet so I might be outvoted...

Anyway Lil' C had a good first day - here's hoping it is the first of many!
Posted by Lythan at 11:34 pm

That's quite a marathon post, Lythan - lovely to read about your day with Sue (pity it was the wrong day for opening!) - read about it on Sue's blog and commented. Great pics of the youngsters.

Well I hope it is anyway!
I was very good and went straight to No.4 without reading No. 3 and my card is still sitting unopened until Sunday.

Monday was a lovely day except for the sad news about Spot. I hope Mrs. Miggins manages ok until the new birdies arrive.

Fabulous photos. Scrap material me thinks.
Love the card, it is great!!!

Love the 'look like a bag of chisels' That made me laugh Lythan - Thank You...x:D

Your card is lovely too :)

weird, Could have sworn I added a message on this post - said how cool that photo of the kids on the stairs was and that it looked like a studio shot - and that carys looks like she's only just managing to contain her excitement over the new sxhool stuff - and that I've heard of looking like a bag of hammers, but not a bag of chisels. Anyway, Carys looks fab in her new uniform - wonder how long it'll stay as pristine.

Then, I see a bit I don't remember from this message which sounded like you were saying I was a "terror" - who me? surely not?

Hope you do manage to get new chickens, poor little feathery friends, they do cause you some sadness con't they?