It's not Friday any more...

Phew-wee where does the time go?
Actually I know really because I have been working flat out since then!
I manged to spend about 30 minutes crafting on Sunday (and then was late for a rehearsal) trying to make Carys' friend a notebook with my bind it all.
Hmmm.
Next time I am going to choose the size of the INNER pages first as I am struggling to get any the same size (cos I am squiffy with paper!)
Hopefully it will all turn out alright in the end.

This weekend was our 4 Churches musical - the Feast of Life. I ended up conducting it. that is hard work. For a start I felt like a prize wally waving my hands around at everyone. For another it felt like my bottom grew bigger and bigger as I was aware that I had my back to the audience. Then trying to remember to bring people in and off at the right time and keep count of all the repeats - nightmare!
But it went really well - much better than we thought it would. Here are some photos...
One night we performed in a church with a raked floor and the other in a church hall so it felt quite different - the pics are from the latter. we even had people enjoy it so much the first night that they came again! 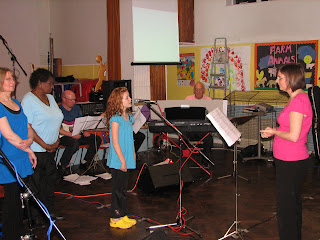 My little dolly doing a solo. My bottom growing as you watch (and that posture is terrible too!) 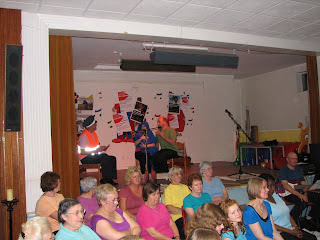 That is me on the stage acting as the mother of Jesus. Typecast. 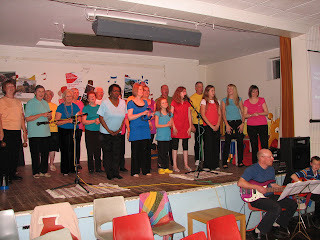 The ensemble taking their bows at the end. It was a bit impromtu as I led the choir out to finish and then remembered you could get up to the stage so that is where we went. I think the choir were a bit surprised but it worked really well.

Yesterday I had to work - finishing off bits for my MA seminar today and chairing the AGM of our local Council for Voluntary Services - Havco. It was my last job as vice chair as I have now resigned to free up some more time. The guest speaker was Camila Batmanghelidjh from Kids Company. Wow - what an inspirational woman! I could have listened to her for hours talking abut disenfranchised young people and why they behave/react the way they do - why they avoid eye contact and respond badly to people staring at them with a neutral face (they superimpose the sort of face they normally see - angry, abusive etc onto you. the answer is to try and give a real smile!).

We had extra choir practice last night - by which time I was on my knees. Only 3 weeks to half term though! I had hoped for a lie in on Saturday morning but was rudely awoken at 7:30 by the unexpected delivery of Carys' bed. Phil worked really hard yesterday and got it all up and finished - he is such a star!
Posted by Lythan at 9:04 am

Aww hun, you’ve been rushed off your poor little feet poor love.
It sounds like you musical was a great success though, the photos are brill.
And NO your bum doesn’t look big in that!

Also pleased to hear that Carys has a bed to sleep in at last.

Oooh you are such a busy bee!!! Looks like despite everything you had a fab time - and you are still making cards!!! Superwoman!!!