Ran out of batteries

Imagine if you will a Rolf Harris voice "the poor little Sheila didn't make it". Yup another chicken is no more. it is not the runt of the litter Windle Poons either but Duracell who suddenly began to pine and then went to the big hen house in the sky yesterday. Ack. Still her last few weeks were much happier than the rest of her life so I suppose we can draw comfort from that.

I had a lovely time with Kathy once I arrived. I went a different way - now known as the wrong way and so ended up being rather late (not helped by an enormous traffic jam). Still we had plenty of shopping time. I was very restrained with just a new white pen, a paper storage bag, some brads and a perspex stamp mount to my name. Though I am going to the Stitch show on Friday so may get more goodies then!

I now know something about studying at MA level. ie it is hard and you have to think for yourself.

Then home to have pizza and a dvd. Carys chose "blood and chocolate" (we had to go to the DVD shop thanks to the postal strike). It is about Werewolves and is not bad. About 7 out of 10. It managed to be a bit spooky but is a 12 which means they hid the worst of the violence. Jolly good show.

And I finished my Salt layout for the week and most of my Daring Card for Friday. That is so organised. Partly because of everything else I have to fit in! I also squeezed in the Little Extra for the week
Christmas Words
We'd like you to use Christmassy words on your card, not just in the sentiment but for this challenge the word/s should form the main focus of your card 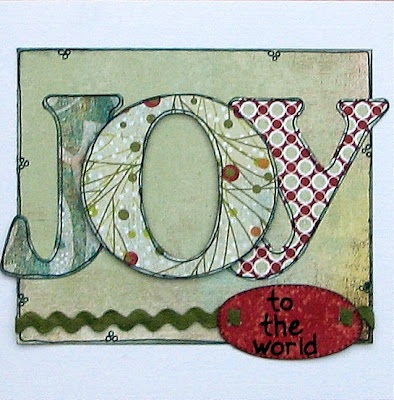 Craft Robo cut out letters (Cafe Rojo font) BG fruitcake. The middle of the o makes a lovely tag!
I used a ribbon punch to add the ricrac. Inked and outlined letters and backing with "to the world" written by hand using a Glaze pen. The O is raised on sticky pads.
Simple but effective IMHO. This may just be my card for this year! (only another 70 to make then...)
Posted by Lythan at 4:57 pm

just for a moment I thought it was 'blood and chocolate pizza!' Heard you had a good day with Kathy on Bubbly Funk Forum. I finished my MSc 3 years ago - someone asked if I was going to do a PhD - no way, too much life to live.

Gorgeous card, Lythan. Sorry to hear about poor Duracell. Glad you had a good time with Kathy. Well done for getting ahead with Salt and DCM (I need to catch up with my Salt contribution - ought to get off here and do it!)

This is a great card, fab mix of the papers

Beautiful card, very effective, I love the different papers you have used for each letter.

What a fabulous card! Great inspiration.

Love the card, great bold letters. They never work out for me when I try!
Pretty much nothing did work yesterday. Ive been on a creative roll of late but my woollly head wouldn't make sense of anything so I had an early night!
I have still to create my piece from your words but have saved it for my holiday.

awwww, poor Duracell, at least she had a nicer last few weeks with you guys than she would have done in the other place.
It was great to see you again, although I'm not sure it really was "THE" Lythan, the craft supplies temptress that we all know and love, because the one I met on Monday hardly spent a bean!

Beautiful papers on this joyful card. I love it!
Ros

Awww poor chicken - want me to go out to the M80 and see if I can get you a new one?