The chickens are finished! 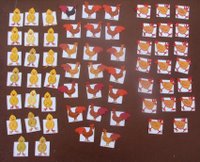 Still got the actual cards to make but the most fiddly part is done. The cards will be quicker if I can allow for thicker margins between my squares. I make the backing out of layers of card punched into squares. But the margins between are thinker than I like, so then I end up trimming the squares. If I go for bigger it will cut down on making time. Ooooh decisions, decisions.

Still haven't actually had the letter of intent, just a verbal agreement but I'll plough on and just have to give out loads of chicken cards this year!

Carys has her guide uniform now so here is a rushed photo of her as we were going out last night. she is perfecting the tweenage "Do I have to?" look. She looks so old to me! ON Sunday hse is doing a sponsored abseil then next Friday it's the Big Gig where lots of Guides go to a concert with lots of the current favourite singers/bands eg Lamarr.

Chickens chickens everywhere! (and not an egg to eat!) Don't envy you Lythan - I'm having flashbacks to 'the wedding order'... And hasn't the guide uniform changed since I was one?!

OOh well done Lyhan on the chickens! I bet its a relief to get them all done and dusted!

PS you are more than welcome to come anytime to craft..although 4am may be a bit awkward.....and we just say Happy Ramadhan..thanks by the way!

Great chickens Lythan. I wish I could be as prodcutive.

How cute are those chickens!

Instead of sticking them on squares, you could put some in baskets.....

Are you wanting some snappy greetings for the cards?

What a lot of cute chickens :) What about chicken themed wedding stationery?! I'll get my coat!