Yesterday was the much promised family day. As it was sunny we went ofr a circular walk in Essex. Phil was giving up watching Bolton live on the telly, I was giving up going to Ally Pally for a craft showand the kids were giving up valuable computer and tv time (oh the sacrifice). We managed to be in the car with a picnic by 10:30 which is amazing for us!

It was absolutely fantastic. we went to a village called Little Dunmow which is a flitch village where once a year a couple who have been faithful for a whole year are paraded round in the flitch chair and given some bacon (how is the competition judged?)

The walk was about 2 hours long and it was warm and sunny all the way along and started to rain as soon as we got back to the car. Phil has a book of circular walks which is very detailed and means you don't have to retrace your steps (which I don't like to do!) 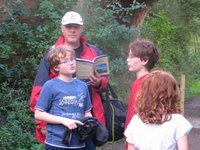 The variety of fruits around the paths was amazing 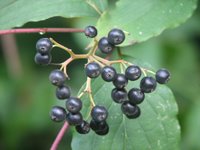 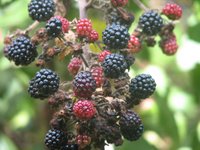 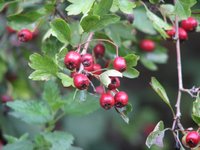 (I've got ten different fruits and flowers in all)
We found some other interesting stuff too... 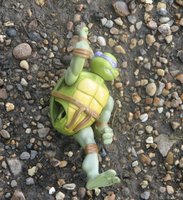 And on the way home we found Phil had only missed part of the match and Bolton won 2-0 yay!
And I did a bit of scrapbooking too so we are all happy.

I also found out I won a card making competition which is exciting (Only a small one but I don't care)
Here is the card!

Yup, just as fiddly as the chickens!
Posted by Lythan at 8:37 am

Yaaay about the card comp!!

J was very happy about the Bolton score, though keeps banging on about the "whinging scousers"

Aww, wonder who the Ninja Turtle belonged to? I love the card - where was the comp? Well done - what was the prize?

oh well done you !or rather well done 'moo' !!! lol! gosh- I'm on form today!. (not) I love circular walks- especially if they have a pub lunch in the middle of them.

Congratulations on winning the competition, another stunning card :D