Been to the wild, wild West (Kingsdown)

Couldn't blog yesterday because we had run out of batteries for the camera and I wanted to share photos.

Firstly, I have added two more friends cards to the dare blog. It is so exciting doing this! Just good harmless creative fun to get everyone's juices going. Oooh which may inspire me a bit more for this week's challenge! 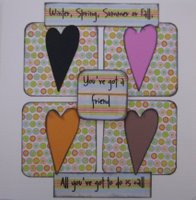 This one uses my BG Gyspy pad that i bought yesterday. OK so I do have the 12x12 sheets as well but in my defence I would say that the papers scale down in the pads so it is worth having both... I am always singing this Carole King song - I hope other people get the connection as well 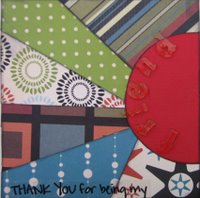 And this is features patterns from the SA Kit this month. Gorgey double sided patterned paper. It jsut feels so wrong to cut into it though! I managed it and sued so of the lovely little brown letters as well. It didn't come out quite like it did in my head in a meeting but not bad....

So West Kingsdown was where the crop was yesterday, hosted by Em aka Wild Woman of Wongo from Scrapstars. I did pretty well on the journey there. Living 10 minutes from the M25 does have its compensations sometimes - though I do wish I didn't have to pay to go to Kent from here! I did get lost in the village - plus I only knew the postcode and not the building so I had to drive around until i saw something that looked like the kind of buildling a crop would be held in. I'm most releived to say I was right!

I met a similarly nervous Di O in the car park so we went in holding hands and sat next to each other. (Only part of that last sentence is true) (Well we only held hands until it became impossible to hold a pritt stick). The theme was using loads of photos on one page. I was slightly hampered by the fact that I

So I watched them and did my own thing. I did my first double lay out using the berry photos from our walk in Little Dunmow and one of Carys doing the Iggle Wiggle race at Gray's Beach on Easter Monday which she has been begging me to scrap (so how can I say no?) 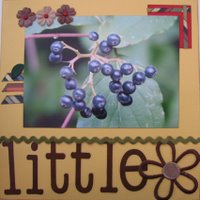 I had a really good time - spent a little money. I wish I had asked to look at more scrap books - I will try not to be so shy next time. Don't know when i can go again - defo not the next two (bother saturday meetings!) but I'll be back in 2007!

Right just got to do the Minister's letter for the Church Magazine and then i am on my hols for a week - woo hoooooooooooo!

(I am going to write about how I watched someone accidentally tell someone else about the end of the last Harry Potter book - thereby rather spoiling it - and how as Christians we can give away the ending to our story because the main character doesn't just die - he comes back to life in a new and powerful way. Which actually I still think might happen to the character in HP too.)

Gorgeous cards Lythan and I really like your take on 'have to have the 12x12 and 6x6 Basic Grey papers'. I shall remember that at the SECC next week ;)