Somehow over the last few days I've managed to fit a fair bit of work and family time in but also get some scrapping done. I guess doing 8 by 8 helps! Of course I've got lots of other things I should be doing... But I'm also fighting the black dog today so I'm jst crafting and ignoring the rest of the world. 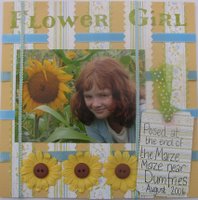 This one uses the new BG Lily Kate (mmm) cut with zigzag scissors (funky) woven with May arts ribbons (cry cos they are so lovely), MM flowers and some buttons to be like sunflowers. 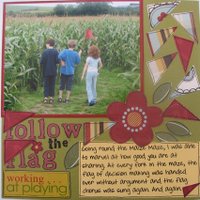 This one uses the SA Sept kit and a sticker I got as a spot prize for putting silly photos of myself on the Scrapstars site which is where won the comp yesterday. I didn't mention the name before cos I felt like a bit of a traitor to Carolyn's forum!!! I also frequent the Self addressed one but that is in America so it didn't feel the same. But then I realised that as Scrapstars doesn't have a shop I don't need to feel so bad. Carolyn's will always be home. But Scrapstars is a new, friendly away! 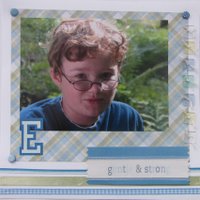 Chatterbox paper, Mambi softly spoken tag thing, various ribbons including some from Carolyn's shop where all the buttons and brads come from too. E is from an old kit. I think it is KI varsity letters 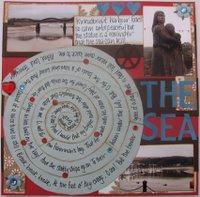 More bits from the September SA kit plus some letters from the Scrapbook Inspirations freebie. When I opened up my mag I found I had two of these free gifts but I'm not sharing cos I love my letters I do. The poem is break, break, break by Alfred, Lord Tennyson. I wanted something about how lovely and dangerous the sea can be. I needn't have cut my swirl up but it probably made writing it easier. I just wnet for it and only had that tiny space where the heart is to spare. cool eh?
Why is he called Alfred, Lord Tennyson and not Lord Alfred Tennyson?Answers on a postcard please.
And finally... 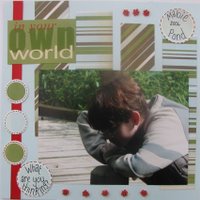 another sticker from my pressie, scrummy crate papers (they just seem to go with everything. You can't really tell in the picture but the stripes are almost identical in hue to the jumper Hywel is wearing) seed bead flowers constructed by my own fair had. I double sided some double sided tape (with me?) and punched out some circles using yer ordinary hole punch, then painstakingly added the beads. it made making them a lot easier in the end!

Off to possibly dye my hair (can I be bothered?) have lunch and then set to making some chicken cards now I have the chickens
Posted by Lythan at 1:06 pm

That nasty black dog that too many of us know too well, grrr, sending a big hug Lythan. Your LO's are fantastic, so inspirational.

Love your lay outs Lythan they are great.As for the black dog well he is hear with me to only i cant be bothered to do anything not even make one card.But hears a big((((Hug))) for you.

gosh that black dogs got a lot to answer for hasn't he. How can he be in so many places at once ? Sending you big hugs Lythan. You know where I am if you need a chat

Down boy! Lythan, the LOs are gorge, as ever. Well done on the comp!

Fantastic LO's and well done on the comp. Love the flag LO :) ... Lord Alfred Tennyson would be the son of a Duke, Alfred Lord Tennyson indicates a peer in his own right :) ...

wow Lythan those LO`s are fantastic - you put me to shame I havent done a page for months (blush blush) - my poor kids sniffle sniffle.

Wonderful stuff Lythan - you're not half bad at this scrapbooking lark you know!

Nothing like getting your head down into some craft stuff to help you through the difficult days.
Hope you're feeling better soon