Ho hum to mmmm to oooh to aaah

Ho Hum
Life has just been a bit ho hum since I last blogged but if I don't blog a bit more now then it will be a week and that is norty. Black dog still there but more like a puppy now... Managed to get a fair bit of work done considering and I've polished off about 20 chicken cards. I am doing batches of 5 that are similar but almost all different, though there is one layering design I like so will use that for chicks, chickens and roosters. Still haven't had a letter of confirmation though so he'd better flipping want them!

Mmmm
On the self Addressed site they are having daily challenges and ideas following the virtual crop at the weekend. I couldn't join in again as we had the family day - plus I just can't get the hang of EST and stuff. I thought they were behind but now I think they might be ahead. Plus all the shop bargains you have to pay postage on, which is £5 before we start in the UK. I'm not sulking too hard though! Anyway, I mention this because Hilary has put together a card organiser class which is fabby and may be something i can mke for our church fair which comes up all too soon.

Oooh
You know how sometimes on blogs people say they have a secret and it's really exciting but they can't say anything yet and it is SOOOOoooo annoying because you want to know and they are being smug gits?
Smug. 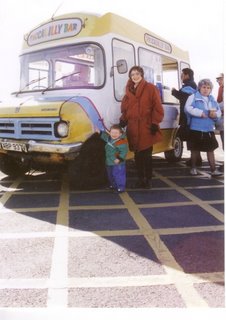 Phil scanned this old pic in. I'll give you a moment to giggle at the scary lady with the big glasses.
Better now?
This is a pic of Hywel aged about 14 months (I can tell because he already has glaasses at this point). It is entitled Mooojic Van. This is because he loved to watch the music van come round the streets playing it's little tune. His mean old parents had not told him that the music van also sold icecream. Can you see they joy on his little face? He was so excited to be actually able to touch a music van that he
a: did not notice the lack of music.
b: did not notice the people behind him buying and eating icecream.
c: Did not notice his parents having a good laugh at his expense.

well that's the reason I HAVE children...
Posted by Lythan at 9:22 am

lol great idea telling him about the 'music' van. I will store that away and use it when I have kids of my own, teehee.

Glad things are staring to brighten for you. Love the story about the music van - you are far to wicked to be a Rev!!!

Love that card box - thank you for reminding me that I need to check into the SA forum more often. Mind you, I do find it annoying to have to scroll past all those sigs and logos to get to the next message!

I've got a secret too, and I bet my secret is the same as your secret *wink wink* Glad to hear the chooks haven't got you down yet!

SMUG eh? tee hee sounds intriguing - when do we get to know?