They're coming to take me away ha,ha, hee, hee

Went to use the car Wednesday. S'funny, the door is unlocked and I NEVER leave it unlocked. Weirder still the spare key is in the ignition. Car battery dead as a dodo. Had a good try at blaming Phil for all this then realised I must have opened the boot on Tuesday, got the shopping out and left the key in the ignition. At least I shut the driver's door. Muppet.

And finally here are my feet!

I've almost got the hang of this work thing again. It will be eaier when we are all back in our usual routine. Except Phil who is now on Sabbatical for three months. I may have already had mine but that doesn't stop me feeling green!

I'm sure you are dying to know more about the holiday...
we actually did more out and about things than we do when we are on a campsite in France.
The kids discovered that going on walks can actually be fun. 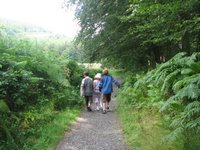 We did two walks in Mabie forest and on both days it was hot which meant that the sun dappled through the trees beautifully.

We got to watch tv together too - which we don't always do. The kids love Dragon's den (why?) and one great programme was about kids starting school. Carys has now perfected her Reception face. 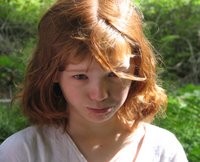 Can't wait to scrap it!

One of my friends mentioned that we were going to Scotland in "rainy season". So in a very grown up way, every time the sun shone I went "rainy season. Hah!" to myself.
OK sometimes I even said it out loud.
Cos, there was rain sometimes but it was lovely and sunny most days for at least part of the day. And we usually like a bit of rain as it gives us the excuse to stay in and do nothing for a while...

One mixed day was when we went to see the deer. They were doing a deer trail at 2pm. I decided that we could have a lazy morning, eat lunch in the caravan and then drive there and hang around for a while. All went well until I looked at the map again and I realised that I had vastly underestimated the distance. Shoved the picnic in the car and set off. Every mile was an agony as I was sure we were going to miss it after driving for at least 1 and a half hours.
(We have discovered that there is a motorway speed limit, a national speed limit and a Scottish country road speed limit. Even if the road is not particularly bendy and the scenery a bit blah you are not allowed to drive over 45 miles an hour)
The countryside was so beautiful, the weather gorgeous but I couldn't take it in as I urged the car to eat up the miles faster with the power of my mind (it doesn't work)

Dear readers, we squealed into the car park at 1:59. 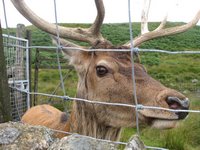 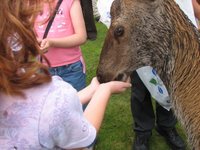 So we ended up having our picnic lunch about 3:15 near a monument up a hill. It was to remember someone called Murray. So we decided to call it the Murray Monumint. Obviously. And had to climb up to see it. THEN it was raining.

I'll show the photies later when blogger lets me
Posted by Lythan at 10:57 am

good to read your news Lythan ! love all the photos