The end of an era

I posted off a completed circle journal yesterday. Gave me a bit of a pang! I'm excited for Net whose journal it is but it feels funny now we have reached the end of the circle. Mine won't arrive back today but Sue W who has it now, not only does splendiferous pages but also is super speedy! So it won't be long.
Net's CJ was called "Did you know" - a crafty way to be nosy if you ask me (and i just wish i had thought of it first!) Most of the interesting things about me I share anyway so I decided to put 6 truths and 6 fibs and you have to work out which are which. Net also wanted the CJ to be "purty" so i was very brave and broke out my fave BG Phoboe papers. Oh they are even nicer to use than to look at!
There will be a big reveal so I can't really share but I will give you the tiniest peek!

I then used the same papers to make a Carole Janson style birthday card. I showed people how to make these at the cardmaking club at church and they went down a treat. The funny thing is that i suggested inking the edges first but they prefer not to do that (wastes too much time) and my hands then itch to get at the paper and ink it myself. Oooh I am such a tyrant! There were 10 of us there and they all have so much fun. I end up shattered though!
Anyway this card is for a lovely lady at Church. 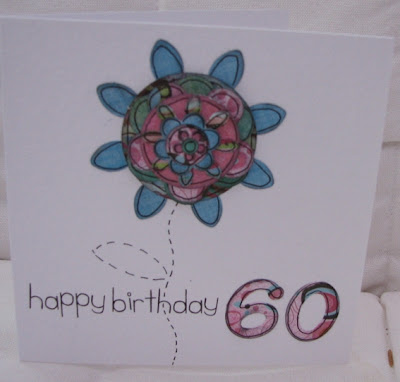 Numbers were die cut as I was trying to robo something for someone else at the same time. I have tried to make my own mat for Jimbo out of laminating sheet and repo spray but it has not been successful so far. Stems were hand drawn although i could have used my stamps. Just didn't have time as I needed to get to the post office!
One day I will get a good close up of these flowers. Still haven't got the knack (must read camera manual) 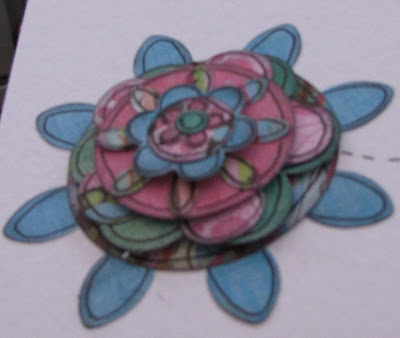 Last night we watched the remake of the Poseidon Adventure. Carys was on the large sofa with Emrys and I was enjoying a rare snuggle with H. I looked at Carys and her face was a bit drawn "Do you need a cuddle?" (there were lots of dead bodies). She practically leapt into my arms, it was so funny. Today she declared that although she hid her face for some of the film (more dead bodies) she really enjoyed it.
I entered calmer waters later with my LO of the walk at Maldon. 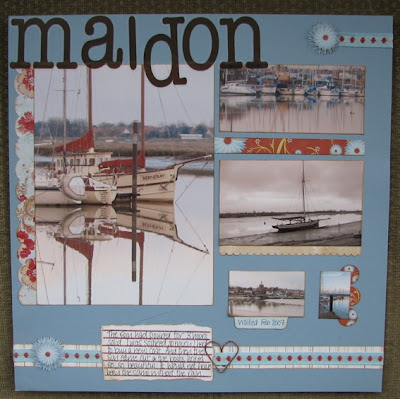 I'm still trying to things the Ali Edwards way and mix up papers from different companies but it isn't half messy! and I had just about decided on the papers and was seeking letters when my eye fell on these Fancy Pants scalloped stickers. So all the little bits I have already punched out of three different papers will have to be saved (yup I will need to take a photo to match!). Other paper is Chatterbox and Feb SA kit which I can't remember the name of, for the journalling.
Here is the journalling close up - it is not very erudite but I love to have a nose at what people have written on their LO's and I'm just thinking of your eyes!

I'm still shattered after a long weekend of work so i am having a night off tonight too. But my brain will be stretched by the current DCM dare! They are getting harder and harder!

Oooh nearly forgot Gillian sent me a fandabbidozie (!) RAK which will be great for Mothers Day cards. smooches Gillian! 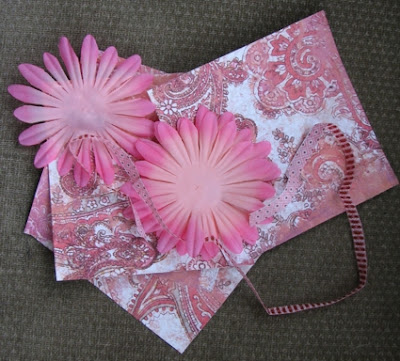 Gosh you are brave using your Pheobe papers, I have had mine nearly 2 weeks and cannot bear to cut into them yet! I have a project in mind but will have to wait a little longer before I use them!!! Love the card, it's really pretty.

I've got my Cj I've got my Cj! And as Lythan says the papers are luscious - in fact my tongue is covered in paper cuts...~note to self~ stop licking paper....

Love those flowers Lythan, how do you do them?

Love the Maldon LO - the colours you've chosen match the feel of the photos beautifully.
The birthday card with the flower is just gorgeous - I love 3d flowers too!
CJ looks great - but you can't be saying Net is nosy, surely not - or maybe it's a different Net.....

Pink stash looks cool - but have you seen my new ribbon.....

Oh WOW!! Lythan I really, really, really Love that LO!!!.. it's amazing!!!.. I just knew you'd create something stunning with those beautiful photo's..
love the card too.. just want to touch it!!!!..

Those fancypants stickers are gorgeous aren't they!!
Fab layout. I love how it flows.
Im trying the Ali Edwards school of mixin' it up & it is good when you don't own a lot of stash to match colour tone. Still scary but Im getting better. Just need my mojo to come back now!!!!

I love your gorgeous cards and the layout you did... and your RAK stuff is awesome. Hope you will show us what you do with it.

p.s. thanks for your comment on my blog... the buttons were off my own shirt... so I guess I can forgive myself!!! lol