See I had a day off yesterday and what I really should have done was a card for the Daring Cardmakers Little Extra and the big one for this week. But I didn't. I (almost) finished tidying all my craft stuff, went for a pub lunch with hubby (we sat outside! in March!). Did an 8x8 Lo of my da and then later went to a crop at Imagine That.
So all scrapping and no carding. How naughty is that. In my defense I don't have a lot of playing time and if I have too many deadlines then it gets stressful. I often don't have time fr the Little Extras. I did this week but played instead. Mind you it is no loss as the cards that were done by more conscientious people are super duper. Go and see NOW!!!

And then come and see what I did instead... 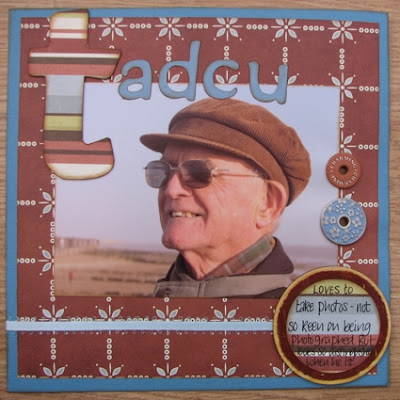 This is all from the latest Self Addressed kit (sold out already). Gorgeous papers and extra bits. I nearly used a real chipboard BG letter but couldn't bring myself to so this is a card version for the "t". We R Memory Keepers papers and chipboard circle and eyelet things which went on a breeze with my cropodile BUT I really wanted them in just a little furhter and it just woldn't reach. Sob!
Here is the journalling for you nosy ones! (like me) 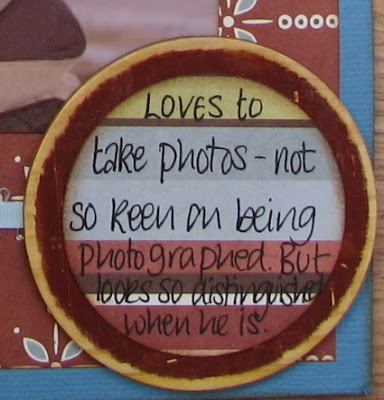 And then the crop. Oh. My. Word. It was fantastic. I've never really done a class where you scraplift before and thought might react as Carys did when doing dancing lessons (why should they tell me what to do I just want to dance). But I loved it. I phoned Emma to find out what to bring and she said 3 photos. So I printed up a few lots of 3 to choose from cos i didn't ask what paper we were using. But a bit of scrappy magic happened cos the paper went so well with the photos I chose. My version is a bit messier than hers - but hope in a good way. I have to show you lots of photies cos I loves it so!

The paper is Basic Grey Gypsy mixed with some gorgeous shades of Bazzill including the rather lovely whiter than white stripy bottom layer! 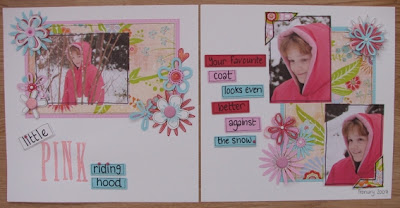 we had to stamp onto the Bazzill. I was, frankly, pants at it. But covered up my mistakes with some glitter glue at home and its a bit better now! The other two croppers there - Janet and Tracey managed it beautifully, grrr. 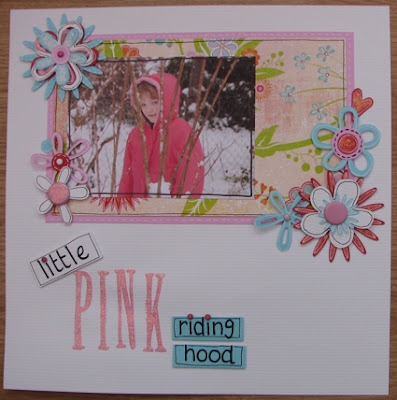 I chickened out of writing directly on to the LO as well. I then ran out of white for all the writing. Oh well. 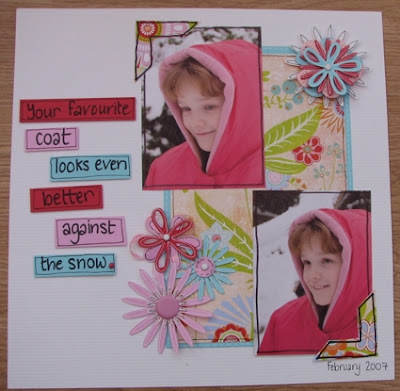 And my pics were too big for the other mat so I made some of my favourite giant photo corners.
And we got to do some big flowers. Which are my new best friend. Emma added in the idea of acetate flowers. I tried adding a bit of paint to mine with mixed success, All of these die cuts were cut with two big shot flower dies. If you are a Big Shot user then these really ought to be on your must have list. Next time i get to a crop i will be taking lots of spare paper to cut them out from!
And some almost in focus close ups... 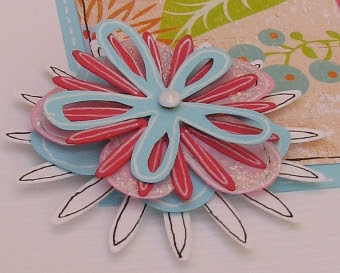 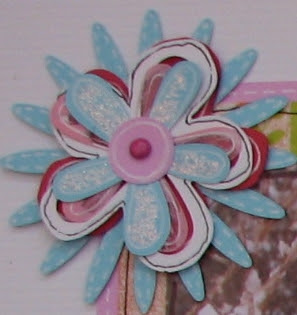 Thanks for sharing with me!
Posted by Lythan at 1:07 pm

Creative Treasures said...
This comment has been removed by the author.
7:03 pm

oops, i deleted the above post it didnt quite make sense,
What i meant to say was, lythan that is absolutely gorgeous, i love the colours :)

What beautiful LO's Lythan... I really love the one of Carys.. just amazing... :o)

Oh WOW! The little pink riding hood is just stunning! It looks so pretty and so fresh!

And I love the journaling on the one of your day ;o)

LOving THOSE FABBY FLOWERS! Great colours and I like the balance between blank white and the detail, inspiring.

I am not an expert at scrapbooking but I think that that is one of the lovliest pages I have ever seen.
Sheila
xx