Back in lovely old Upminster.
With a cold.
Boo hoo.

Anyway to take my mind off it, here are the last of the holiday piccies.
First Thursday night was pub quiz night with my school friends and their hubbies. Its funny cos when I'm back in Swansea I'm always on the look out for people I know - but I tend to look at the 18 year olds to see if I recognise them not the oldies like me! I don't feel 40! Phil's brother Martin came along as he now lives in Swansea too. It was a bit odd seeing an in-law mixing with my school friends and we have NEVER seen Martin in a tie before (he had been on late shift at the psychiatric hospital) but he, like Phil is really easy going and can relax with anyone! Just to complicate the pictures, no-one is in a photo with their other half...

Rob and Phil (me).
We got the third highest number of points but about 6 teams came first and second. It's always good fun though. If you are ever near the Old Inn at Penllegaer then don't forget that Thursday night is quiz night!

Friday we went for a meal and walk at Rhossili. It was so beautiful.
We ate indoors much to my parents disgust but the kids are really funny about wasps, I don't like eating outdoors in the wind and there was a big drop which would have made me nervous. (Official: I am a wuss). The windows were a bit grubby but the views were spectacular. The boys were too busy reading to notice... 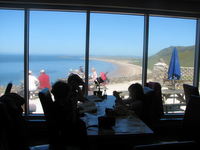 Then we walked to Worms Head. Well to the end of the cliff anyway. Sadly the causeway was still under water. We will have to go back to walk it. You have 5 hours around low tide to get there and back otherwise you are cut off and it is unsafe to swim. Its the sort of thing that makes me nervous (told you I was a wuss) but am determined to do it one day. A helicopter landed on Worm's Head while we were watching. Had someone got stranded? we'll never know...

Here are some more piccies of the beach, Worms Head, another beach and some sheep. 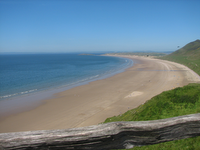 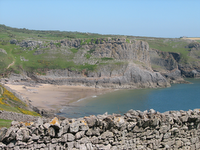 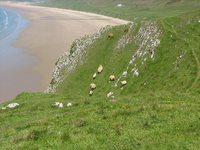 Love the way those sheep cling onto the mountainside. We used to tell English people that Welsh sheep have two legs shorter than the other to cope with the mountainsides...

Back to work tomorrow and Phil starts Jury Service - a new thing for Ministers as we were exempt until recently!
Posted by Lythan at 5:26 pm