Tell me about your childhood...

Thought I would issue a blog challenge!
What are your earliest memories?

my earliest is of being pushed along in a stroller by my Grandad (Pop) and pointing at the street lights going on. I have a feeling I said this in Welsh which puts me at under 2 as we moved when I was that age and I was bilingual before we went to London (and I could talk quite a lot it wasn't just 'ga ga' which i do believe is the same on both languages...)

Spookily my mum's first memory is being pushed along the same road by her father but definately a different part of the road and a different pram. Pop was quite an austere father I think, but a very loving Grandfather. He decided that Pop would be a good name because it just might be my first word. And it was... Until we moved he spent a lot of time with me - and that went on until he died when I was 12. We loved each other very much and when I think about him I still miss him - 28 years later...

Anyhoo another early memory is of wearing an Easter outfit with a very scratchy hat and big scratchy knickers. It is a pink costume and I have photos of me wearing it. I was 1 3/4 at the time. All I remember is the sensation of scratchiness and possibly the excitement of new clothes. I was a chubby little thing and basically looked like a marshmallow. WOuld show you but all my photos are at my mum and dad's.

So lets hear your early memories...

We now have a medium sized paddling pool in the garden. Hywel and Carys spent most of the weekend in it. Here are Carys' feet looking cool 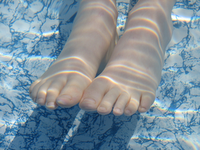 Today I spent a fabby time with the wonderful Susan and Anita. we did some chatting and some crafting. I discovered something TERRIBLE. I have put my photo stamps in Cd cases and the little notches in the jewel cases have made indentations in the stamps. Sue, being resourceful created a shim for them but it is a major disaster. so just beware if you buy photo stamps.

This evening was movie night and we watched

which was really great. I am a heretic in that nature programmes bore me rigid. I was forced to watch the whole Big Planet series and I would end the night really bad tempered because I didn't want to watch.
I know, I know.
But this one I enjoyed! The kids did wonder why the penguins didn't just have cars to drive them the perilous route back and fore between feeding and mating grounds....
Posted by Lythan at 5:44 pm

Kathy said...
This comment has been removed by a blog administrator.
8:17 am

Lythan Im sorry Im just catching up with blogs so have only just seen your challenge - have done it!

oh gosh ! Lythan, I've been soooo busy working out banners I've forgotten to keep up with blogs ! I will do your challenge tomorrow I promise !!

OK I've done it. Next time you issue a challenge make it a bit easier though, eh? pleeeeeease