you see nothing for ages and then loads turn up!
Usually this time of year life gets a bit slower. Well it hasn't this one and it means I have less time for fun stuff like creating and blogging. Although I did manage a little the other day - as you will see!
The kids are back (hurray - although the house is not as tidy as it was! And I have to fix when I can use my computer. But I love it!); a new boiler system is in and all is well.

So a quick creative catch up.
I finally managed to do my swing card for last weeks Daring Cardmakers.
but you can't see it any more as I ahd to remove it!Then yesterday I had another layout published on the Docrafts site 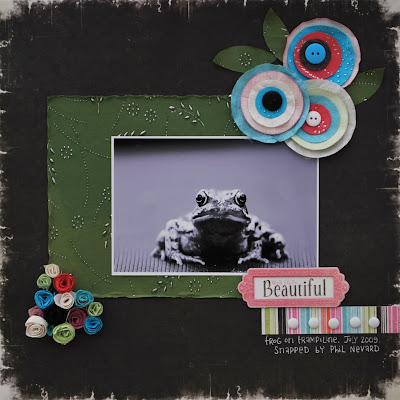 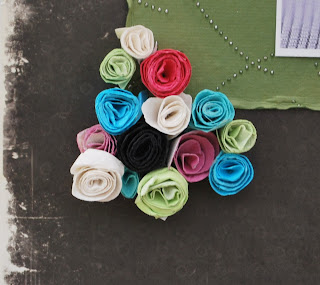 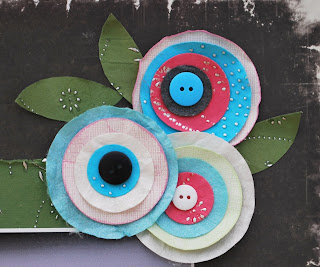 I used more of the handmade and silky papers which are great for rolling up the little flowers. And the colours are gorgeous.

And finally today I shall give you this weeks Daring dare!
Kathy chose
My challenge consists of just one word really and that word is;
LACE
You're free to interpret "Lace" in whatever way you like; you could use the actual word on your card, stamp or cut a lacy design or maybe use one of these dictionary definitions to inspire you:
1. a net-like ornamental fabric made of threads by hand or machine.
2. a cord or string for holding or drawing together, as when passed through holes in opposite edges.
3. ornamental cord or braid, esp. of gold or silver, used to decorate uniforms, hats, etc.
4. a small amount of alcoholic liquor or other substance added to food or drink.

I could only find one humongous piece of lace which I decided to fold up. Not sure - looks like bloomers! Still as it is on a card for a 90 year old it might take her back to undies of her youth! 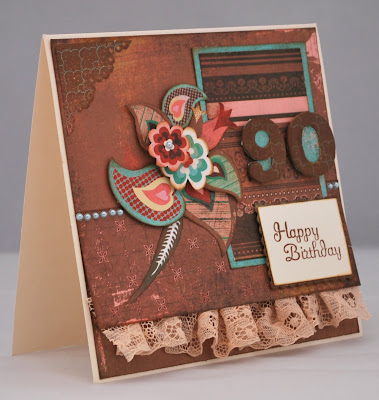 I used a cream square card and mostly BG Blush papers. I have only one more card to squeeze out of that paper pad - what an acheivement! The 90 and the photo corner uses a BG Obscure paper which matches perfectly. I made a lacy border to the corner with a punch. A bit fiddly but it works. Lots of "fussy cutting" (love that US expression) and layering, a line of pearls and that is it.
Close up of the layers 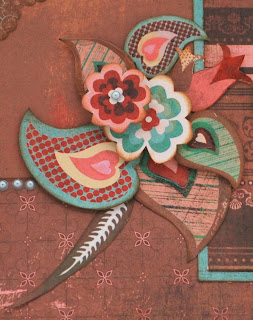 I'll be a bit hit and miss for a while with my blogging so I will catch you when I can...
Posted by Lythan at 9:51 am 8 comments:

On Monday we got up at silly o'clock to do this 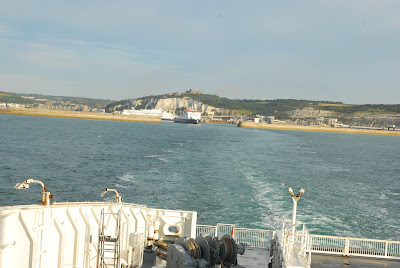 then a bit of this... plus more sight seeing 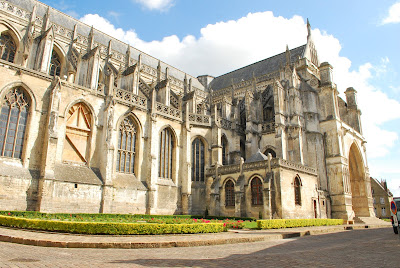 a bit of this 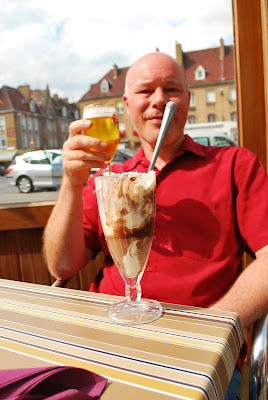 even a craft shop! 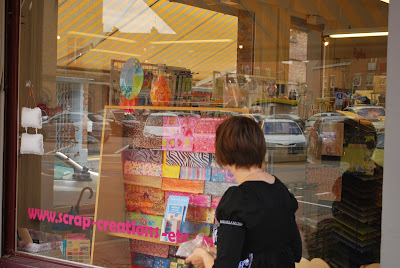 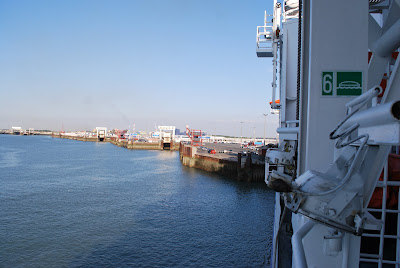 See more in detail on Phil's flickr account
What we didn't do was eat much as I wasn't well and couldn't face it. Can you imagine a trip to the home of cuisine and just a pain au chocolat and a packet of crisps all day. I felt awful in the morning but perked up and had a fab time. St Omer was hum hoh. Cassel was small but interesting. Bergues was fantastic (and not just due to the craft shop) and Dunkerques beach in the afternoon sun was perfect. We just managed not to have to come home via the Tunnel and found the hypermarket instead and stocked up on Carambars, jam and Cat's Tongue biscuits (as you do)

Since then I have been mostly preparing and running craft classes for my Church arts week. Two down one to go (plus a class at Imagine That on Saturday). Coo I couldn't do this as my real job - it is exhausting!

I did have time to do my Salt layout and was only slightly late...
Pauline chose the challenge for the first time and came up with a brilliant one

Imperfection
We see Jonah being incredibly frustrated by being asked by God to take a prophecy to the Ninevites. For Jonah, Nineveh is an example of all that is evil and wrong in the world and he struggles with the idea that if the people repent then that is enough to wipe the slate clean. He realises that if he is to take the prophecy to the people then God is giving the people a chance to repent. Jonah can’t cope with the thought of this so tries to flee from the presence of God. It doesn’t work. Jonah realises that he can’t flee from God and that God works with the imperfection in Jonah’s life just as he worked with the Ninevites.

Jonah wasn’t perfect and just like Jonah, we aren’t perfect. We don’t wait until we are perfect to follow Christ, we follow knowing that we have failings but being assured that God will work with us. For me it’s a huge sense of relief knowing that God works with us even when we are stubborn and failing, there’s no expectation of perfection, just an expectation that we will try. The verse that really speaks to me is Jonah 4:2, "you are a gracious and compassionate God, slow to anger and abounding in love".
I share Pauline's love of Jonah. Most people know about him and the whale (swallowed because he was running away from God) but may not know that when Jonah eventually preaches to the Ninevites and they repent he is cross with God for not punishing them as he said he would. Jonah sulks and God sends a plant to grow up over him and give him shade. Then he sends a big worm to eat the plant. "Why did you destroy the plant. I loved that plant!" cries Jonah. "Then maybe you can see why I didn't destroy the people I made and love that have been round for longer"

Which all led to this layout 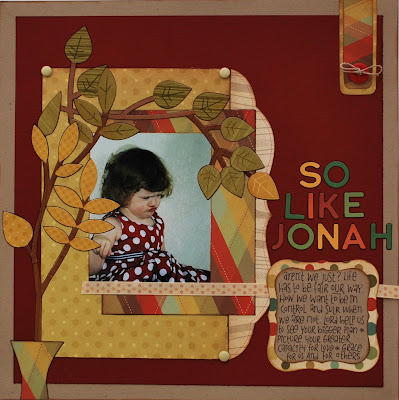 Lots of Cosmo Cricket Mr Campy including the plant made up from loads of tree and branch stickers. The letter stickers are from October Afternoon. And how do you love that photo? Carys aged about 2 and a half. It is from a photo session I did with the three kids when we had a non digital SLR. I can't remember if this was a real strop or a pretend one!

Here is the journalling in close up 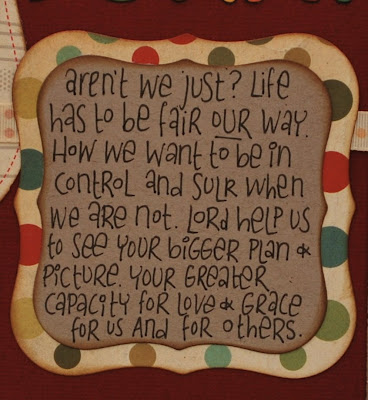 I won't be on time with my Daring card tomorrow but will catch up asap :)
Posted by Lythan at 6:39 pm 7 comments:

well it is more like I have spluttered out. Not feeling too great which is a shame as Phil and I are doing something FUN tomorrow that I need lots of energy for. Which is a great excuse for doing very little today. Well since this mornings service anyway. Haven't been feeling on top form since Friday and I only have small bursts of energy. So I haven't responded to many of the Daring cards as yet (sorry) and I am a whole day late for the Get Funky challenge (even bigger sorry).

Enough wingeing - on with the show! Get Funky is the new challenge blog for the Funky Hand papers. Every month therewill be a challenge hosted by one of the team and there is a fabby prize to be won £20 in Funky Hand gift vouchers - so well worth going in for.
If you don't have any FH papers yet (and why not? they are a crafters "must") th there is even a freebie download to go for.
This month there is a challenge to use a sketch by Anice - Ms Funky herself. I decided to use the freebie papers. SO did Anice and we are currently arguing over who rocked the papers/sketch best. I love her chocolate flower and the extra bling. She likes my felt flower. SO we will just have to declare a draw (only hers is better) 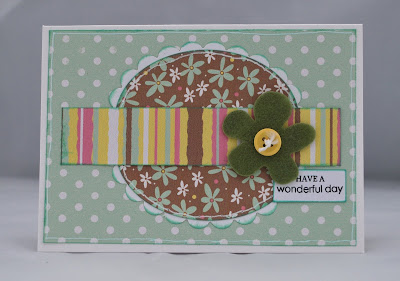 I printed the papers out in two sizes - which I can do with Picasa. I cut out ovals with nestabilitiesand cutthem in half. The stripe is only part way across because that is as long as the stripe went vertically and I prefer my stripes that way. I like it though. I wish I had added some staples at the edges fo an extra something. The felt flower I have had for years. Ditto the button. The sentiment is from Imagine That.
Now it is your turn!

I was very excited today to get my paws on the September Scrapbook Trends cos I am in it (my photo and everythng!). I've saved this layout to show you in case they didn't like them being on blogs first 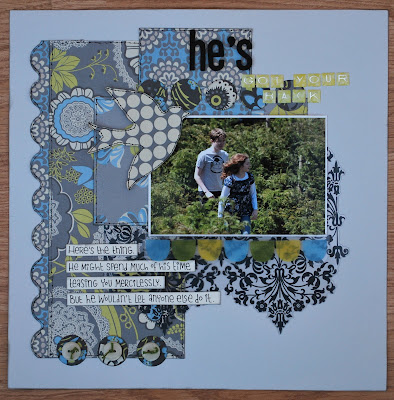 The papers letter stickers and shaped acetate were all from a GottaCraft Kit. The scallop is Chatterbox. American Craft thickers and Imagine That buttons and bob's your layout. I love this shot of Em and Little C and I think it is my most favourite journalling ever as it is so true
Those letters were quite hard to photograph so here is a close up

Right that is enough computer time for now. I'll be back soon!
Posted by Lythan at 6:21 pm 4 comments: