I really love the new trend for using die cuts so they sink within your base panel. It is quite fiddly but well worth it in my opinion.
Here are two examples made with some really cute and bargainatious dies from Clearly Besotted 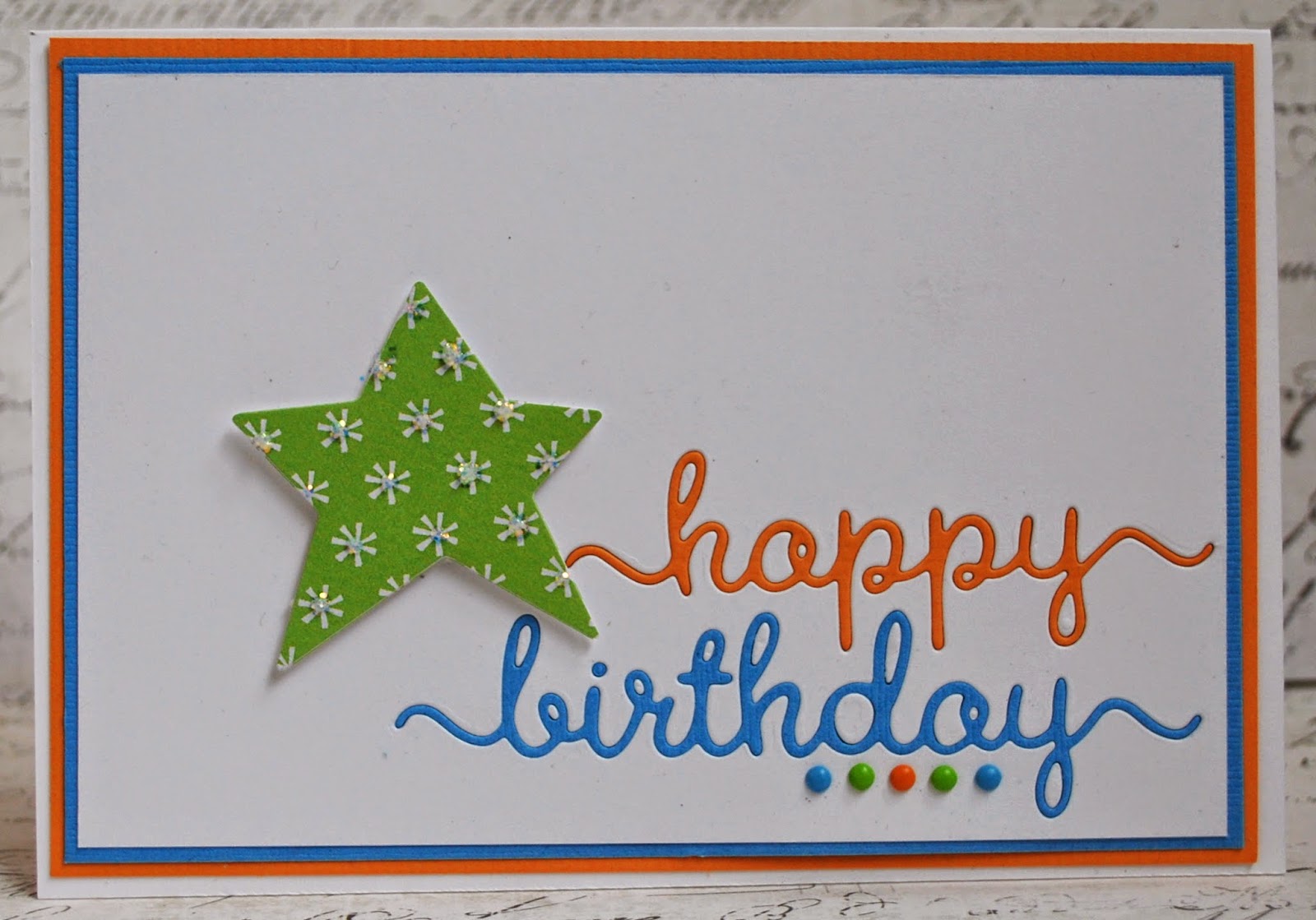 This card was inspired by unearthing some teeny tiny brads. I chose three colours and found cardstock and papers to match. When I started card making I used to subscribe to the much missed Self Addressed card kits. I had loads of left over coloured cardstock card bases and I have now started hacking into them in order to create mats like this as I do prefer white or cream bases. I cut each word seperately and made sure I captured all the tiny white bits to put back when the coloured word went into the white cardstock (OK I cannot tell a lie, I might have had to recut parts of the words in order to make sure I had all the pieces). The star is a QK die cut from Amy Tan paper, raised on foam pads and given a few dots of sparkle 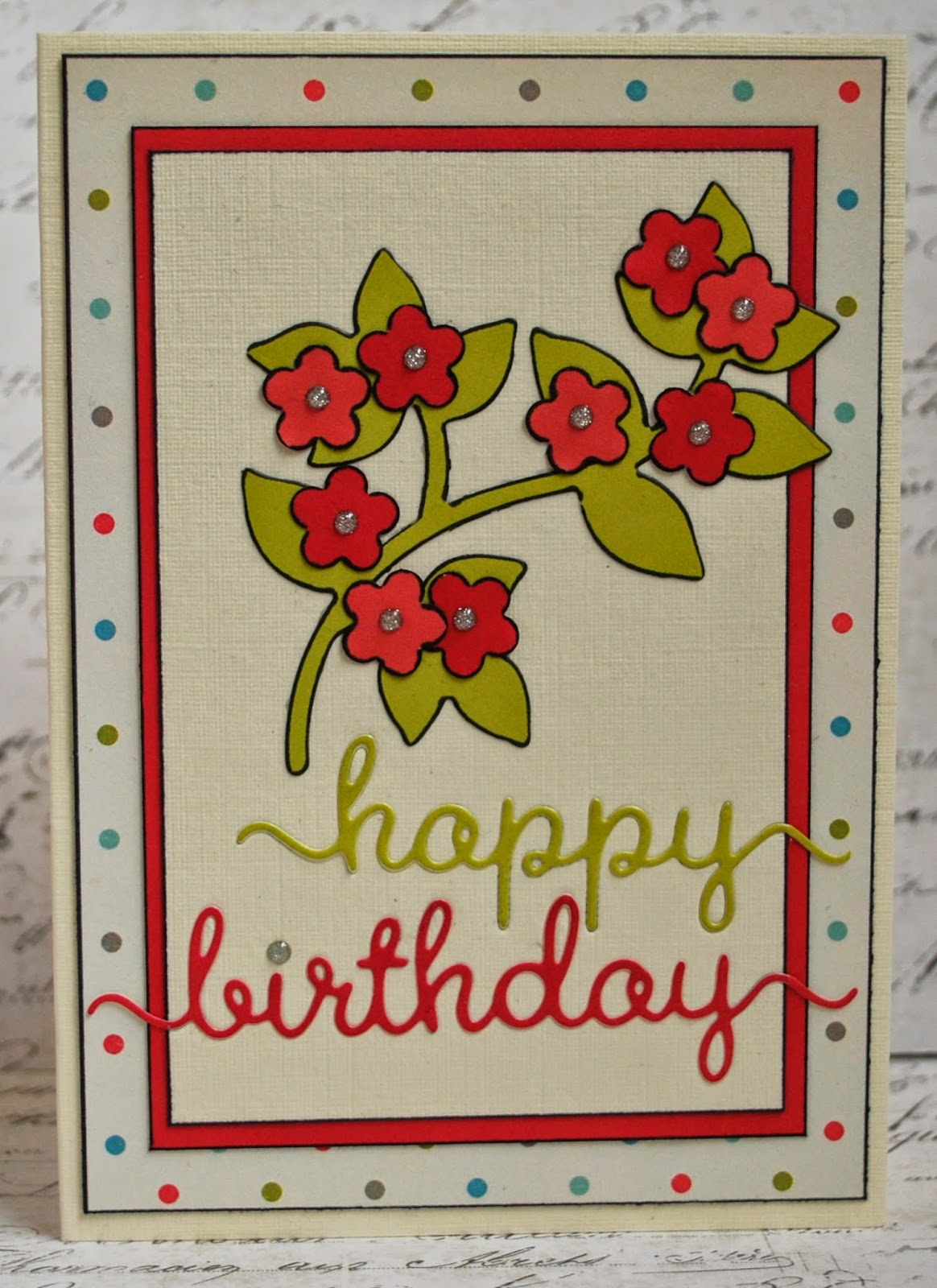 This one uses more October Afternoon papers (I am trying to use up some of my old collections) The leaf die is from Clearly Besotted too. The flowers are punched using a Stamping Up punch. I added some stick on gems and covered the words in Glossy Accents. 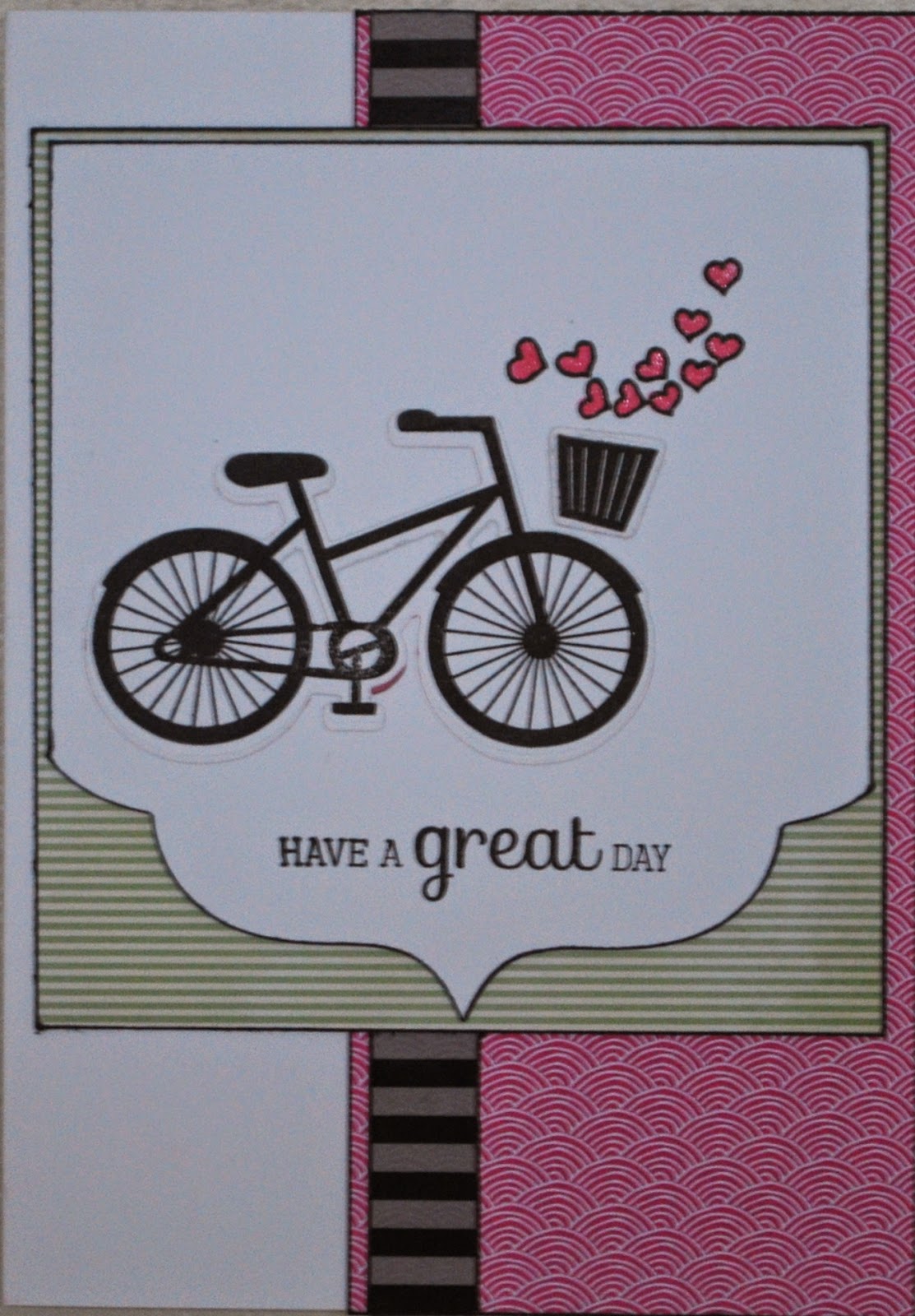 I have been going through a season of spendies in terms of card making recently. I am thinking about challenging myself to not buying any more for now - at least after the parcel I am waiting for arrives.... There is something disquieting when I get the "gimmies". Manufacturers bring out new products every month it seems and so many people make lovely things with them and I yen to do the same. Sadly, I don't always manage to make cards as fab as theirs and so move on to the next new thing instead. There is something important about learning to be content and enjoy what I have. But that is a scary thought so we will see....

Anyhoo, here are a few of my new best friends - all that were inspired by some amazing cards by that fab teacher - Jennifer McGuire This was me trying to channel Jennifer McGuire (and using the same stamp set as well) This was my first go which I had to do fairly quickly so Phil could take it to his mum's. The stamps are MFT's Easter Bunny. The sentiment stamps are Clearly Besotted. I didn't quite get the spacing right so added some embossed lines. There was a lot of sparkle added by using a Wink of Stella pen and some liquid pearls. I loved her card so much that I bought both the flower set and the sentiment set that she used as well. I thought it would be good for some of the kind of cards I need to send in my line of work 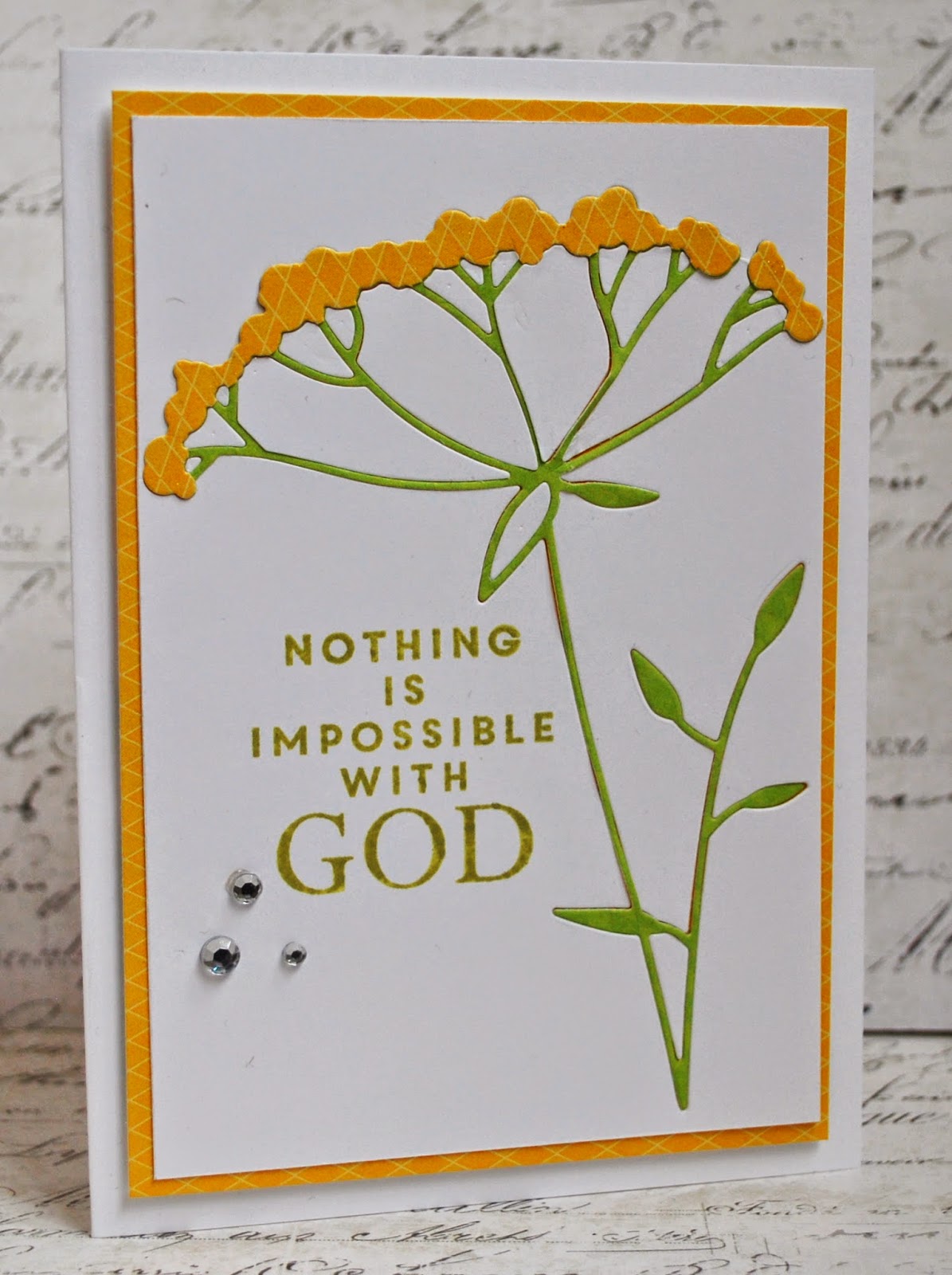 The phrase comes from the MFT set Words of Inspiration. I die cut this Dienamics flower from several papers (the green and orange are from Webster's Papers) and then embedded them back into the piece cut from white cardstock. A few gems and some foam pads and the card needed no more (in my humble opinion) 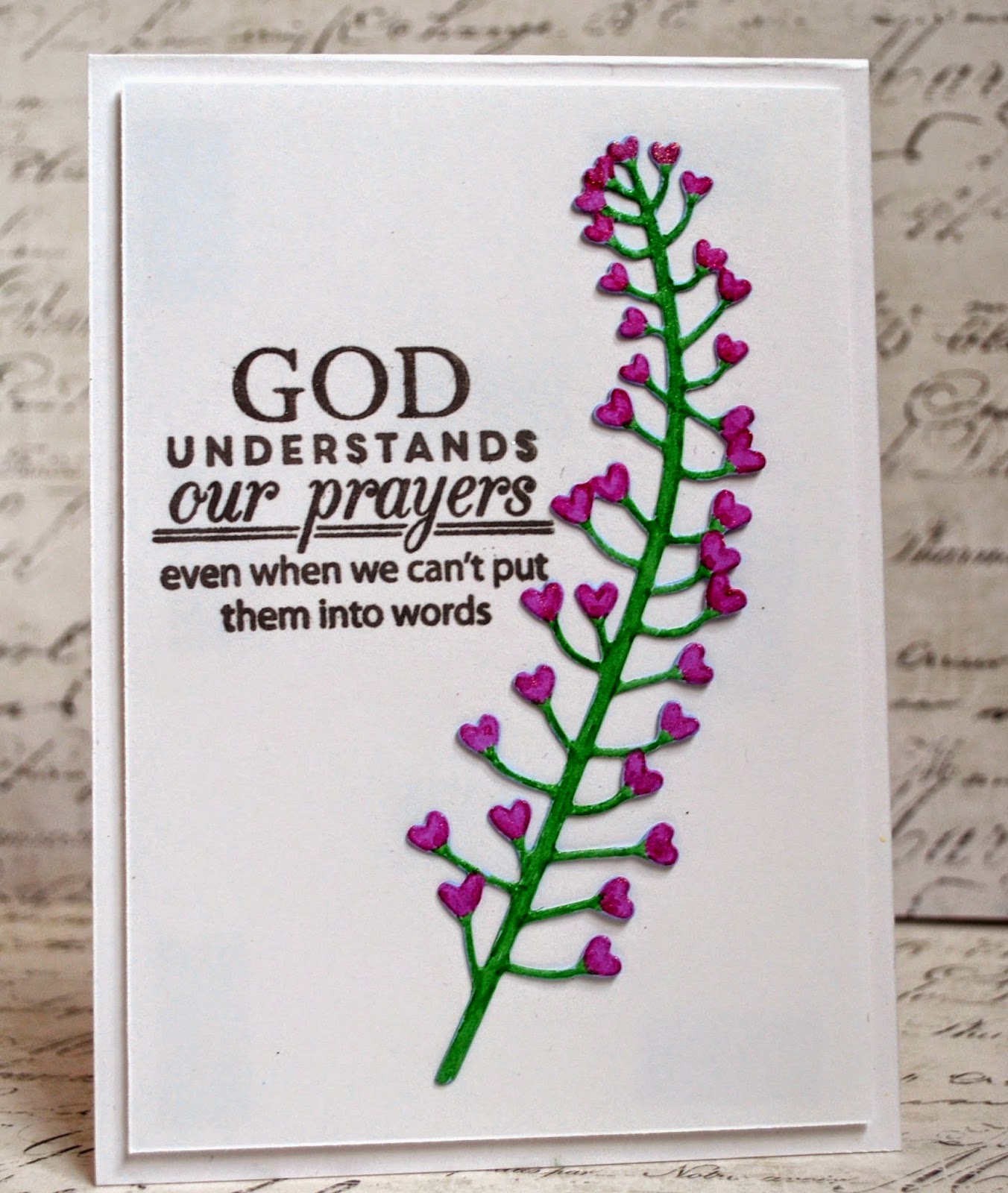 This card features another die cut freebie from Dies to Die for. I coloured it using some Copic glitter pens I have long neglected. The MTF sentiment is stamped with a grey ink

The final card for today was also inspired by Jennifer. I was in two minds about posting it as I think it is one hot mess to be honest! Jennifer made these awesome cards using watercolour paints and a thin paintbrush. She also used a stamp as a guide. I thought I would try freehand
A fail in my opinion 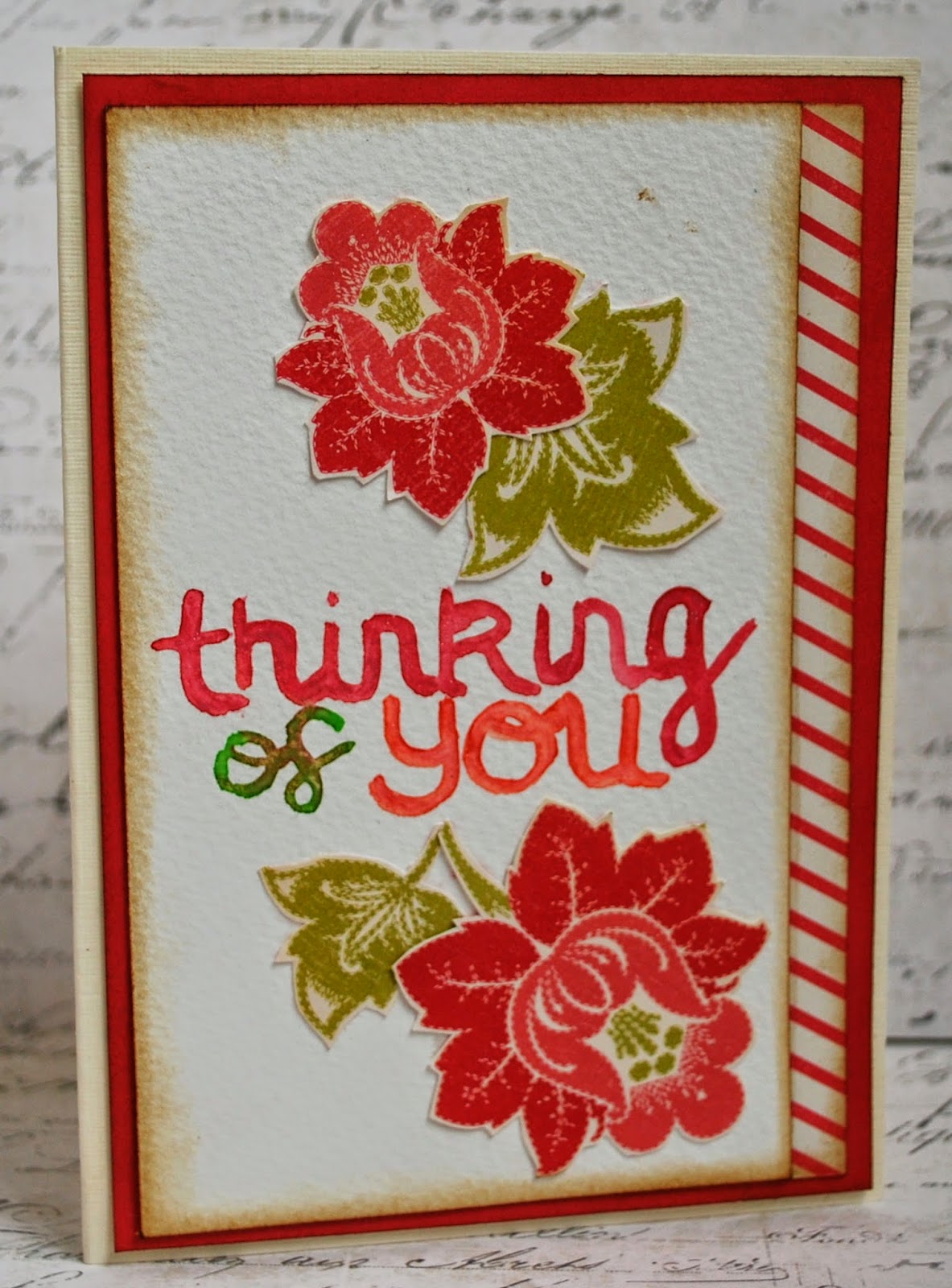 Maybe it is because my writing is still too thick (although I tried to use the thinnest brush I have) but to me it looks rather childish and silly. The main panel is watercolour paper and all the other elements of the card are from October Afternoon.
So what do you think? Should I persevere or give it up as a bad job?
And are you going to dare me to stop buying for a while?

Call me shallow (hello shallow!) but I do like a bit of shiny glittery paper. Whilst making an order for card bases at Craft Creations, on impulse I added a few sheets of glitter card to my basket. Glitter card used to be a right pain - flaky or slightly off in colour. This is adorable. As you can see from my last two daring cards which both feature said glittery gorgeousness.

We'll go backwards from this week - it was my turn to choose a colour combo for the month. I was drawn to this one from Design Seeds 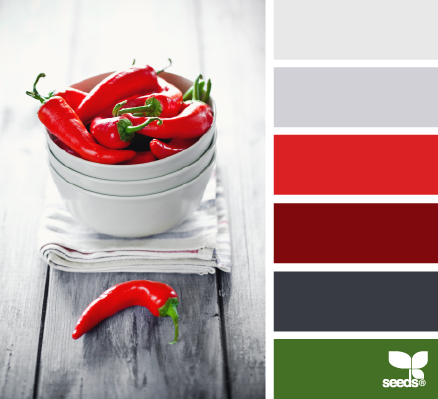 It was only later that I began to wonder whether the fact that it is the colours of the Welsh flag might have influenced me! But I do love a bit of green and red and I think the cool greys stop it being too Christmassy. Although it would still work if you are one of those people who like making Christmas cards all year round.
I don't.... 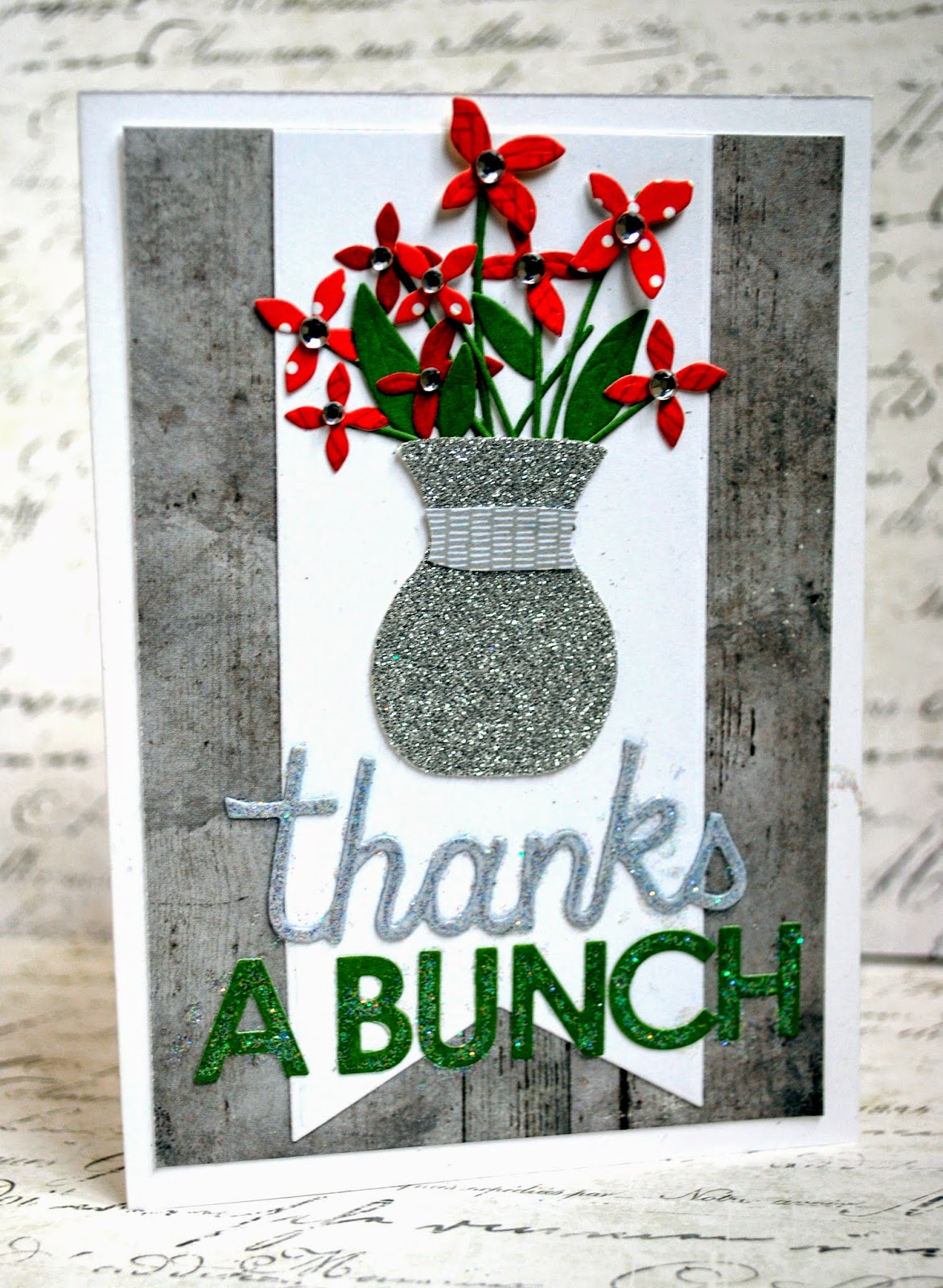 I went through some of my many paper pads and picked out some toning papers - from Kaisercraft; American Crafts Amy Tan and Simple Stories. I used a Dienamics flower die and cut the leaves and flowers out several times. I assembled the pieces behind a vase made using that glitter cardstock and a punch. (One that I have had several years and NEVER used!). The "thanks" is a die cut that came from Dies to Die For. I do like the way that they send some samples with an order! I added some Glamour Dust to the die cut and also to the die cut letters that I cut from green paper. Some of the flowers were raised on foam pads and all had little diamente gems stuck in the middle. And that is that.

Last week I did make a card in good time for the fabulous Svenja's dare. But my hubby had taken the camera to his mums and I couldn't take a photo (somewhere in the house is at least one more working camera but we can't think where!)
He did take some wonderful shots though

so I forgive him!
Plus he did help me out with Svenja's dare - Money makes the world go round
I was a bit stumped until he suggested looking at pictures of money. I looked at a Euro coin and went "ker-ching!" 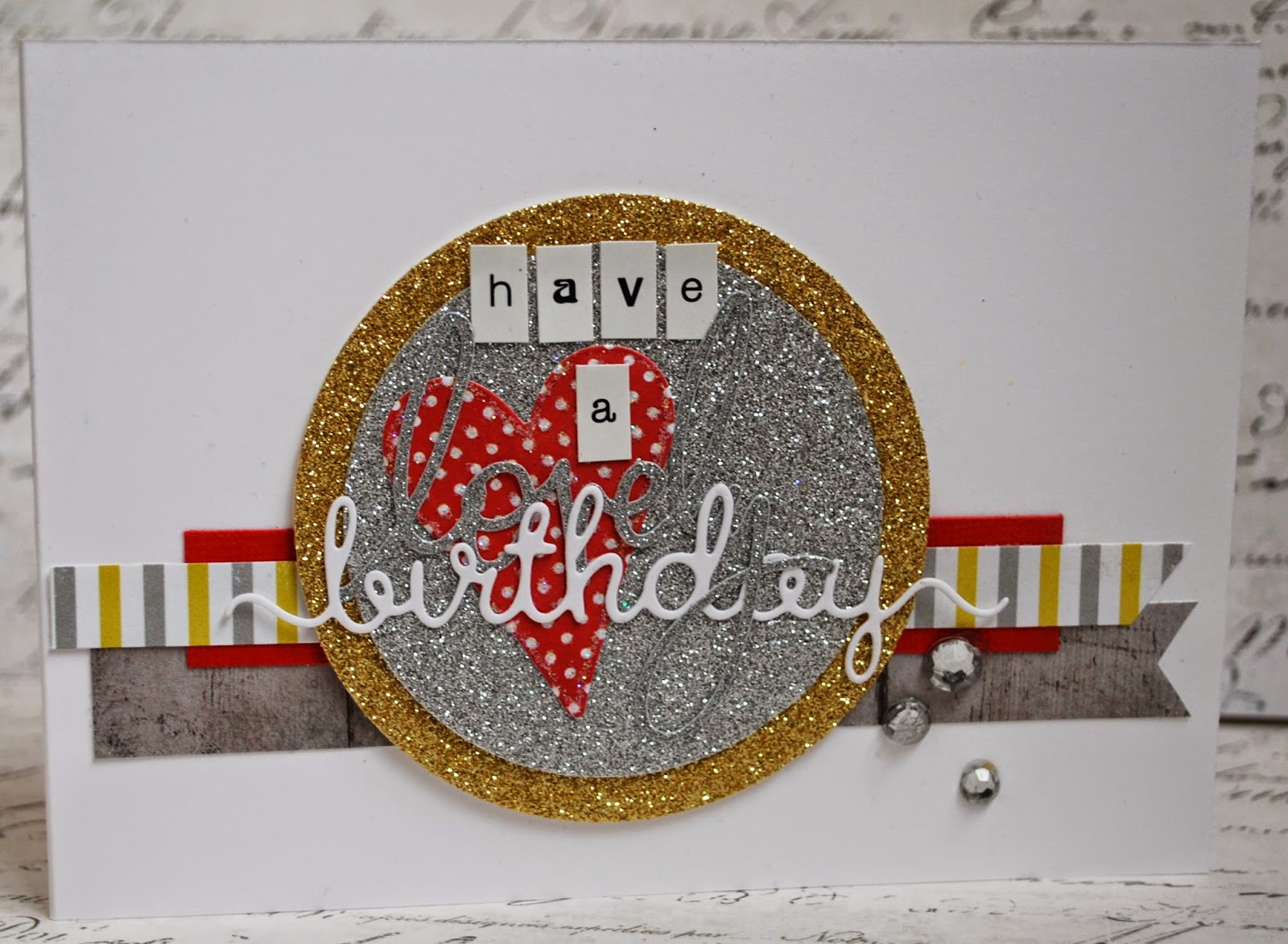 I combined silver and gold glitter card. There is some dry embossing on the right hand side as per the coin but that is really hard to see. I also gave an authentic tone on tone look with a Heidi Swapp glittery sticker. But to avoid that completely blending in as well I added a die cut heart. Some very old LYB letter stickers and a very new Clearly Besotted word die and some almost as new Fancy Pants papers finished off the card - along with some stick on gems.

Right (imagine me brushing my hands together as if there is work to be done). I am now going to write some more quick blog posts as I am forever making things but not having the time and energy to share them here and what is the point of a blog if you don't. There may be some things a-changing soon but I will leave all that to another day....