How did that happen? Practically a month has gone by since my last post.
Well there is a four letter answer - WORK
September is always busy for Ministers. And if you have been away from post for 3 months, even busier.
But there was also getting 2 kids ready for and off to Uni which took up a suprising amount of time (my kids have all chosen to be at least 6 hours away from home) (Mind you Torquay is pretty much miles away from most places. It takes 2 hours just to get to Bristol and that is still the South West)
Actually thinking back over the last few weeks, it has been mostly work.
I have done no scrapping at all in that time (sob)
I also had a poorly computer for 2 weeks and had to use the slowest machine in the world which did nothing for my patience. (I apologise to Phil for all the deep sighs, drumming of fingers and occasional rude word from my side of the study).

I have managed to make cards for 3 out of the last 4 dares on Daring Cardmakers. Not necessarily on time I grant you, but they are there now!
Firstly the colour combo for September. Sharon chose this lovely inspiration photo 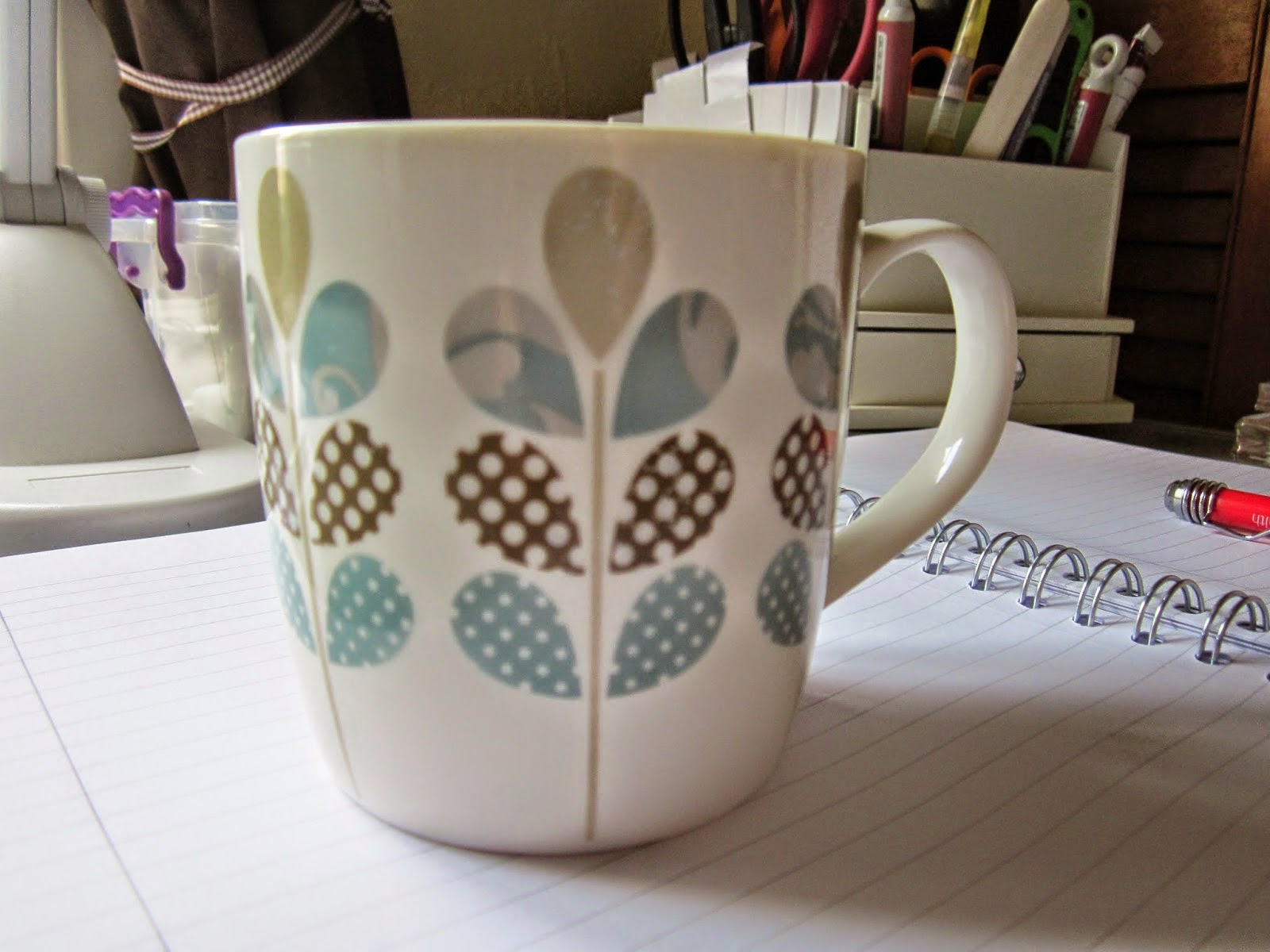 which I decided to take fairly literally for my card 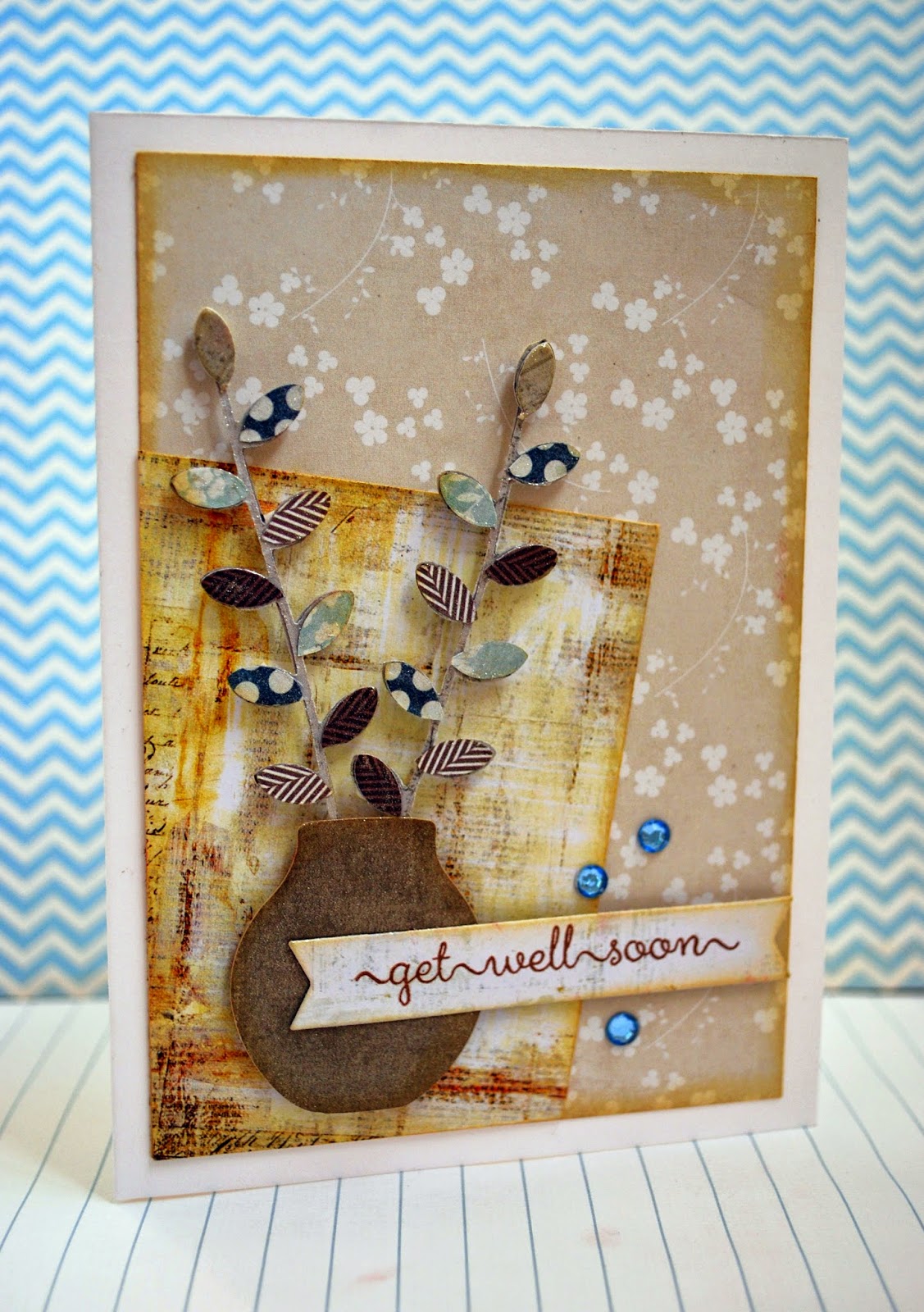 I have quite a few blue/beige paper pads and used a variety on here. I used a Clearly Besotted Vase die and a Dienamics twig die. And yes, I did die cut and stick lots of leaves on to a base branch which was as time consuming as it looks!
The card is based on a Case This Sketch idea. I do like the offset panel. The CB sentiment was stamped onto a Dienamics tag.
A lot of fiddly foam pad cutting went on to give dimension 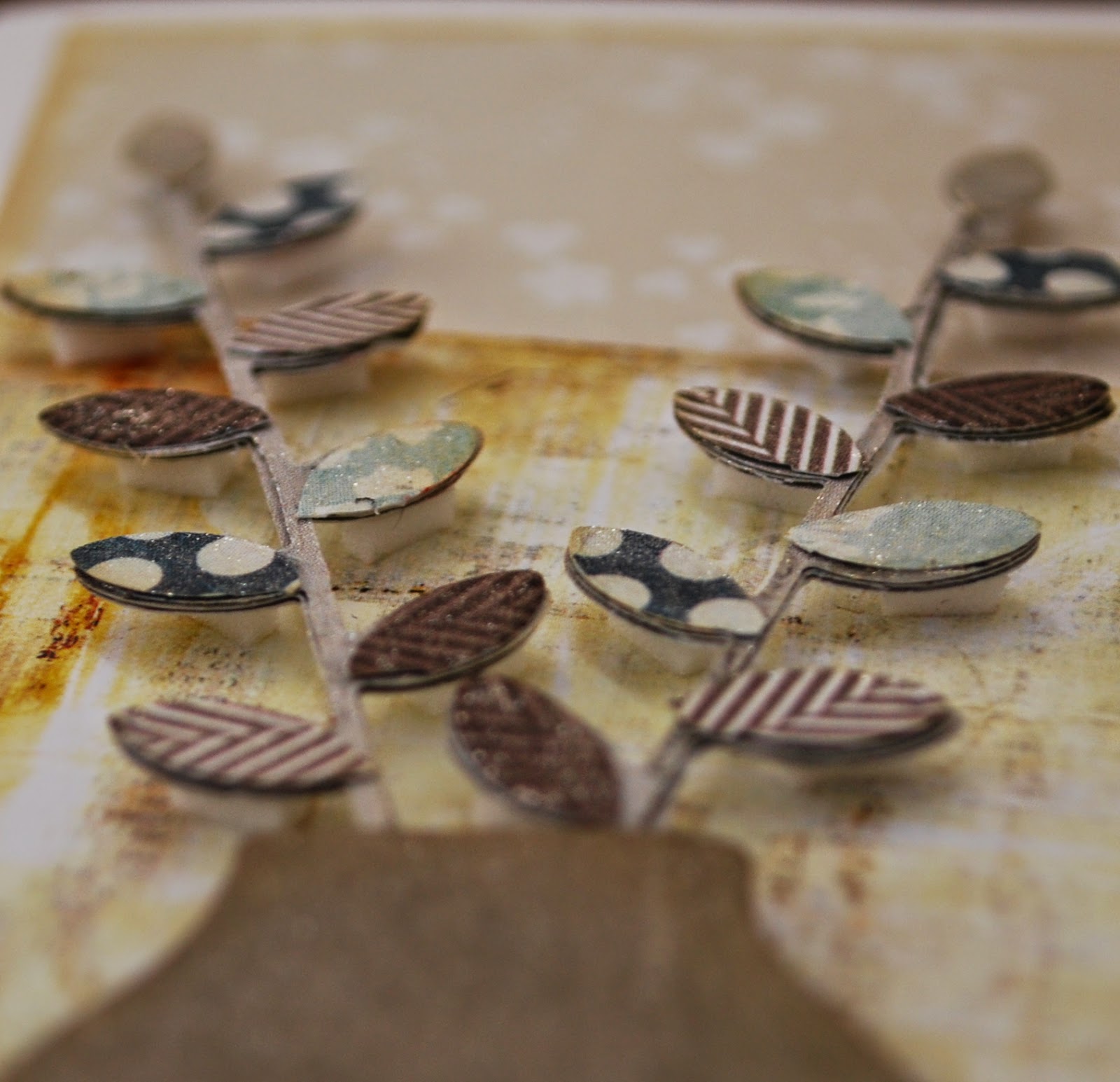 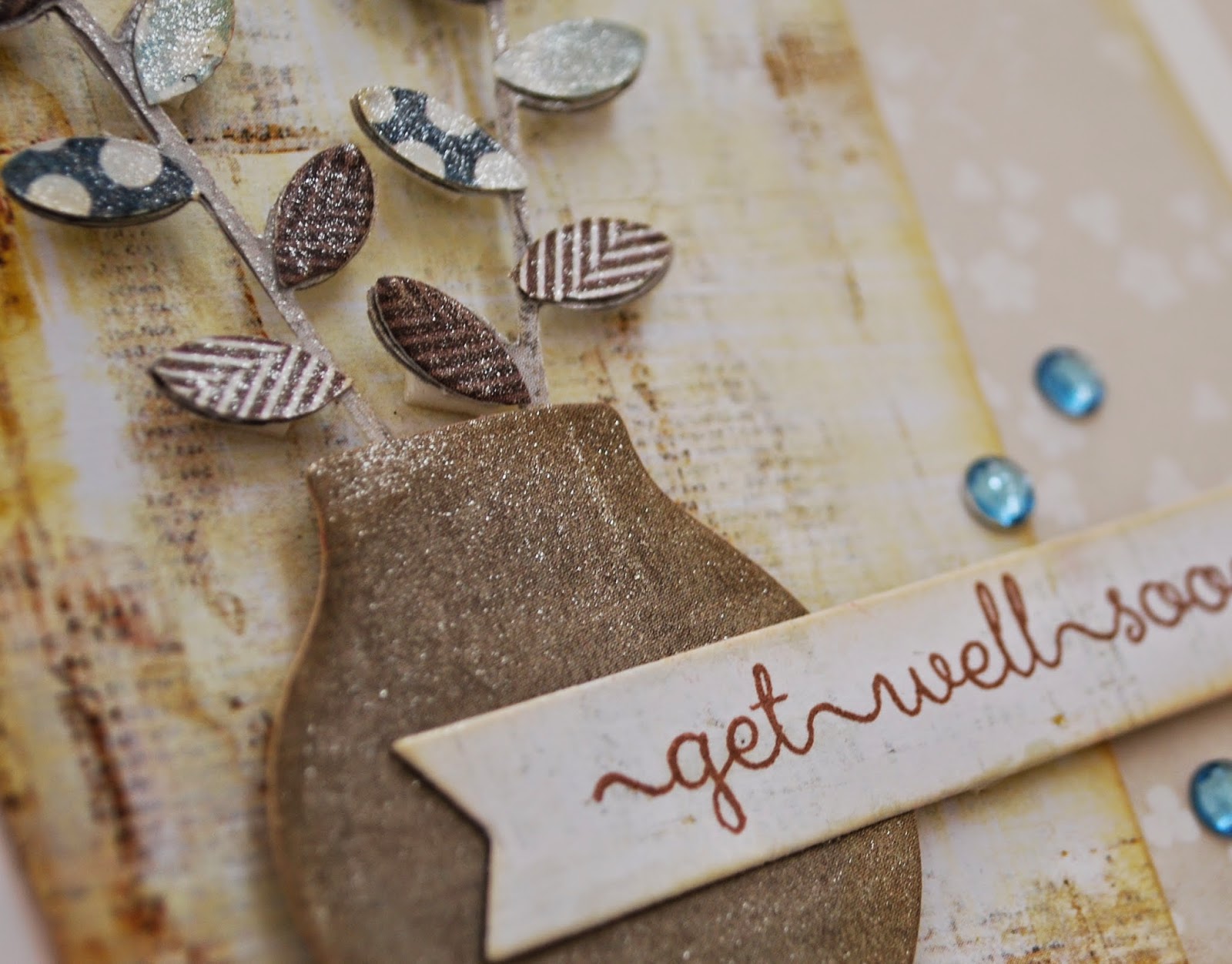 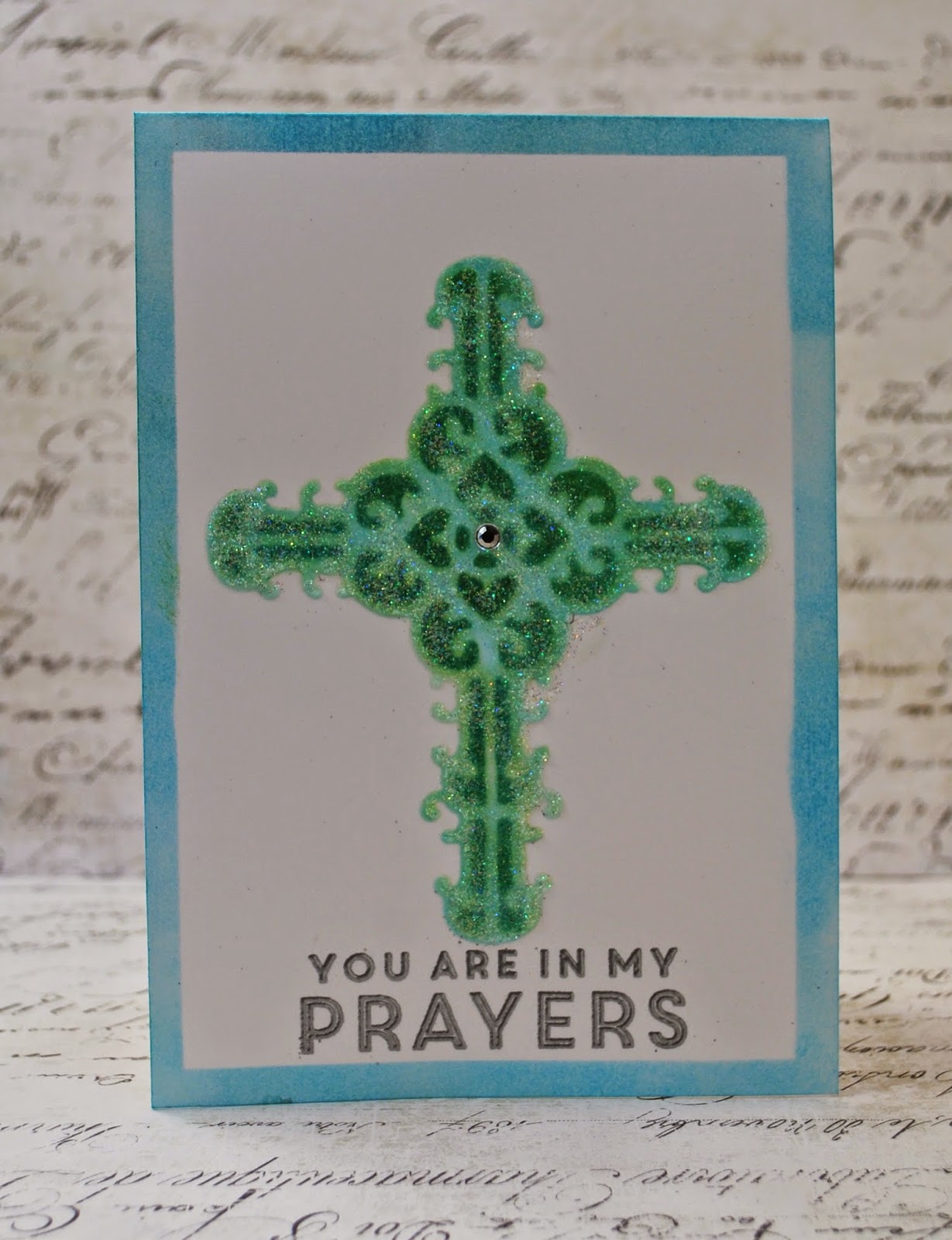 I used a die and the die cut space to create a stencil. First I cut a panel a little smaller than the card base. Then I die cut a Spellbinder's cross from the centre. I placed the panel with the cross shaped hole in the middle onto the card base and used Tumbled Glass Distress Ink around the edge and in the middle of the card. Then I put the cross die cut back in and inked the centre again using Peacock Feathers. Finally I took the cross die cut out again and covered the whole cross with diamond glitter paste and left it to dry. When it was fully dry the sentiment was inked and embossed with silver powder. A sparkly gem was a little finishing touch. 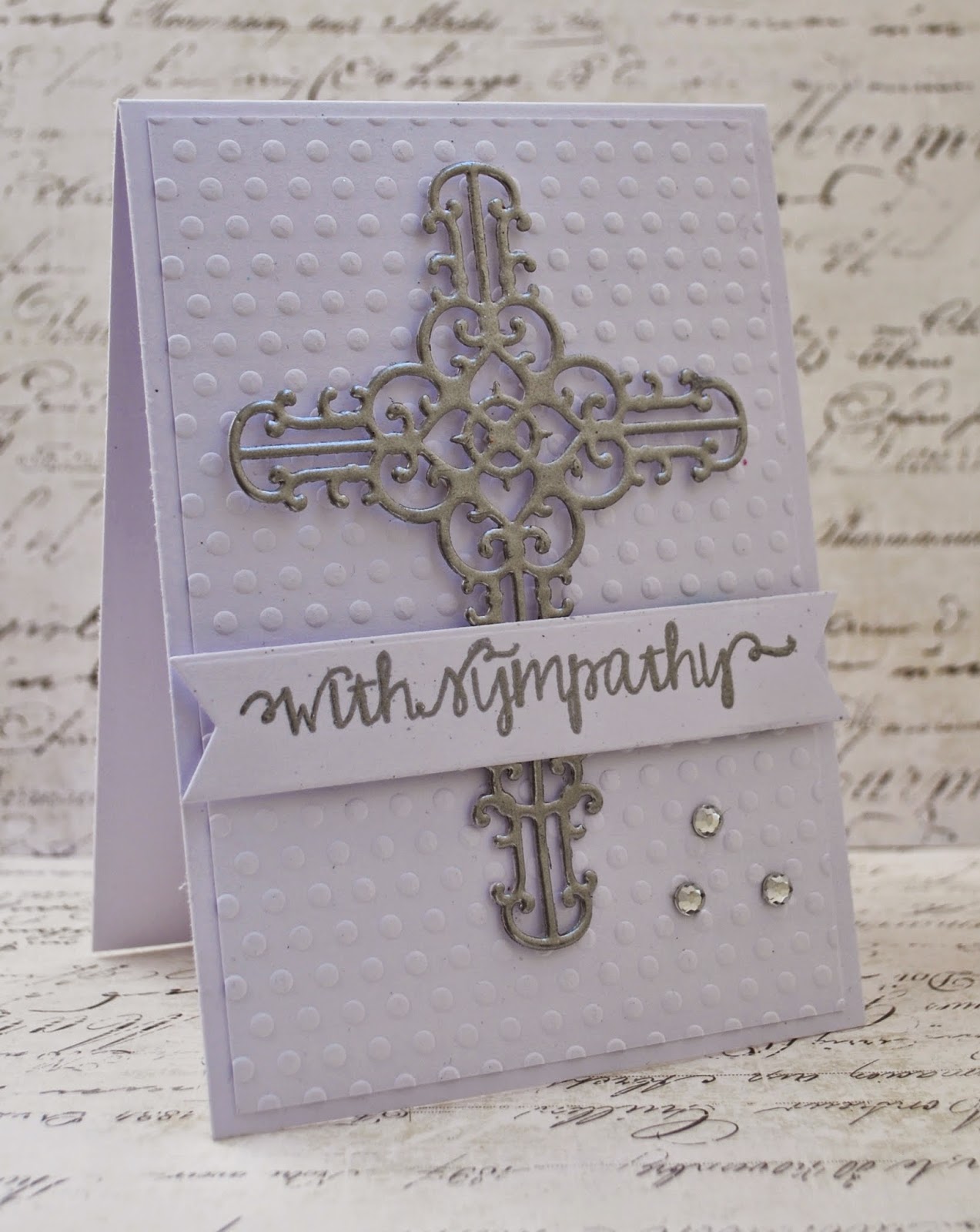 For this card I covered it in Versamark and then sprinkled silver embossing powder on the top. 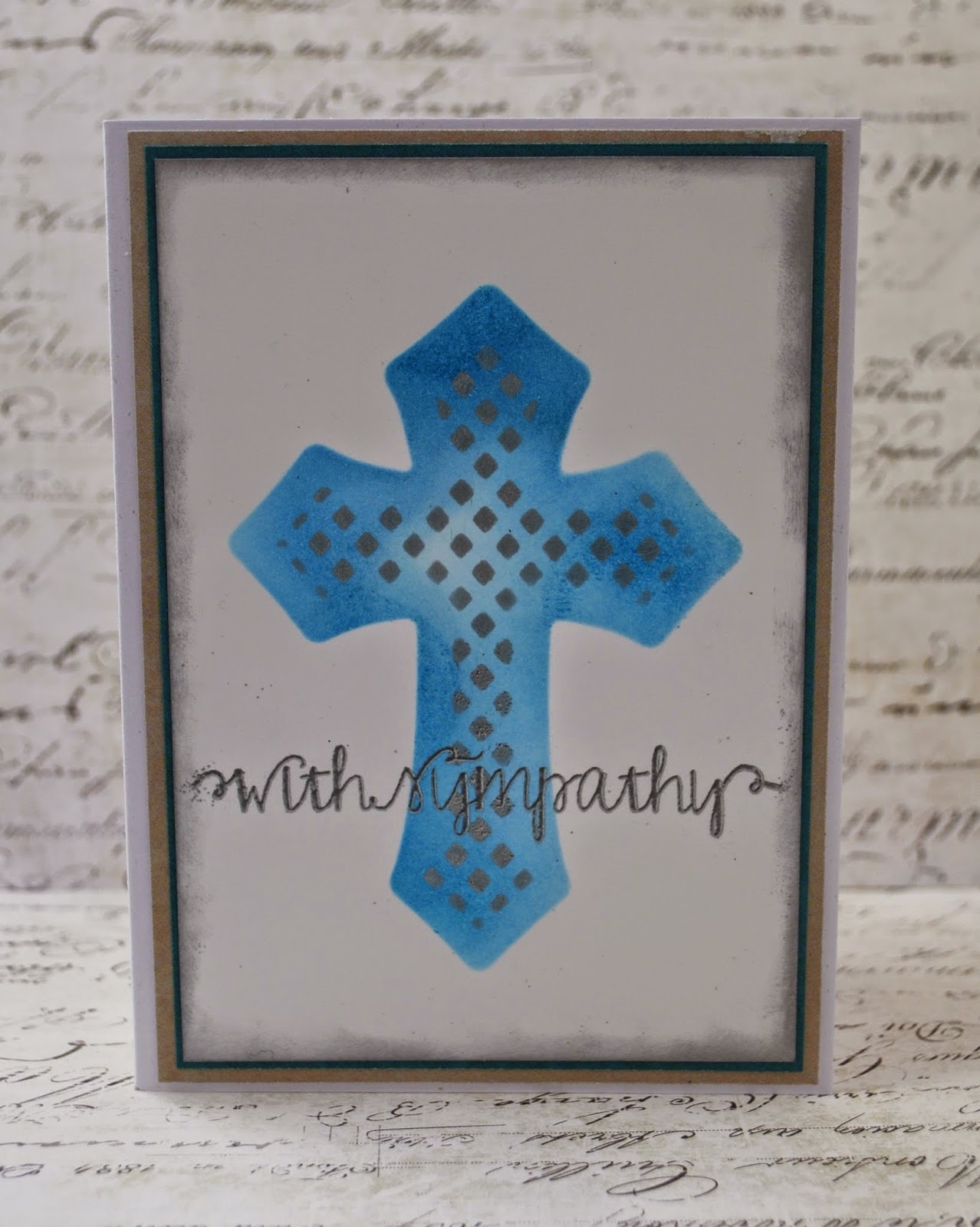 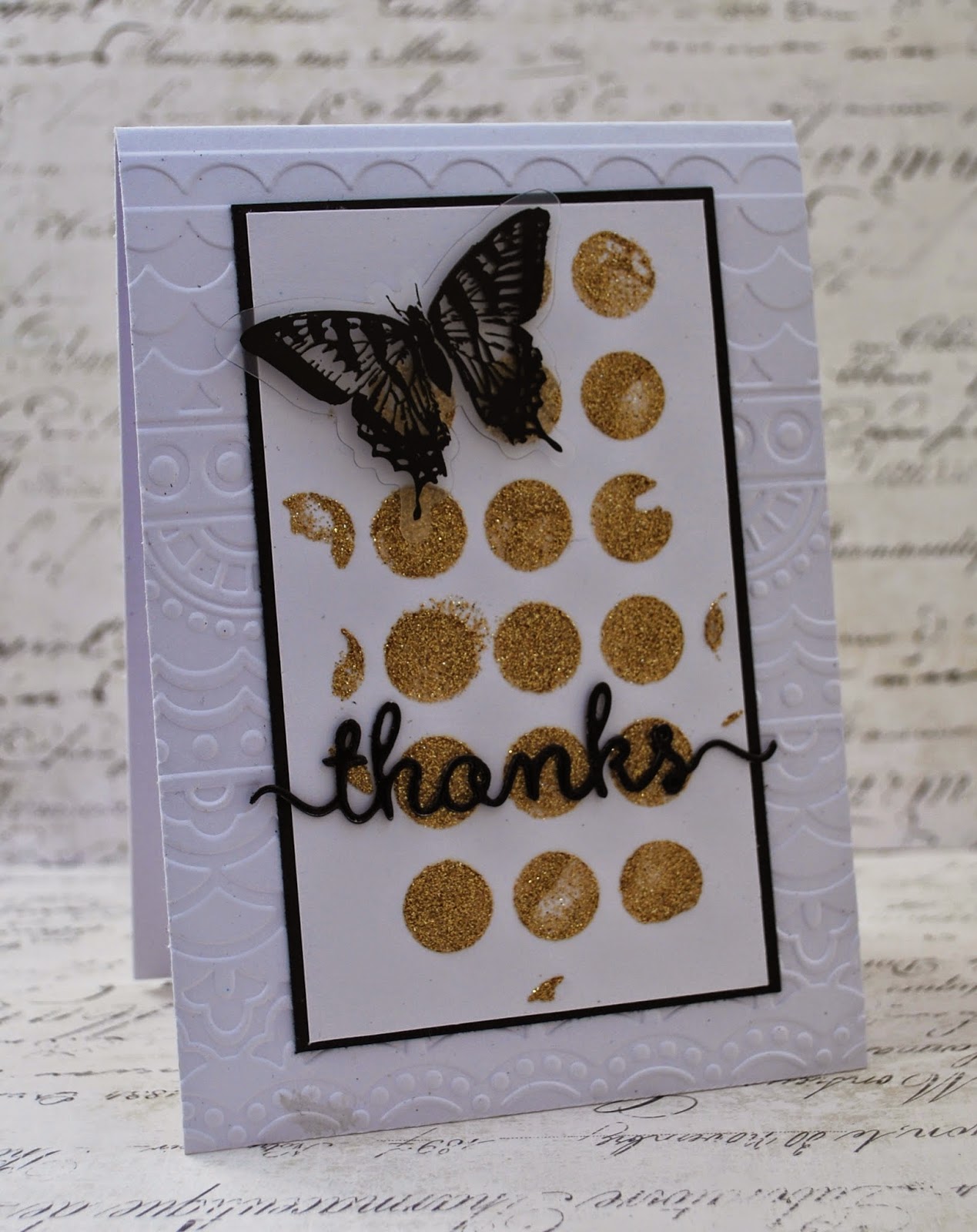 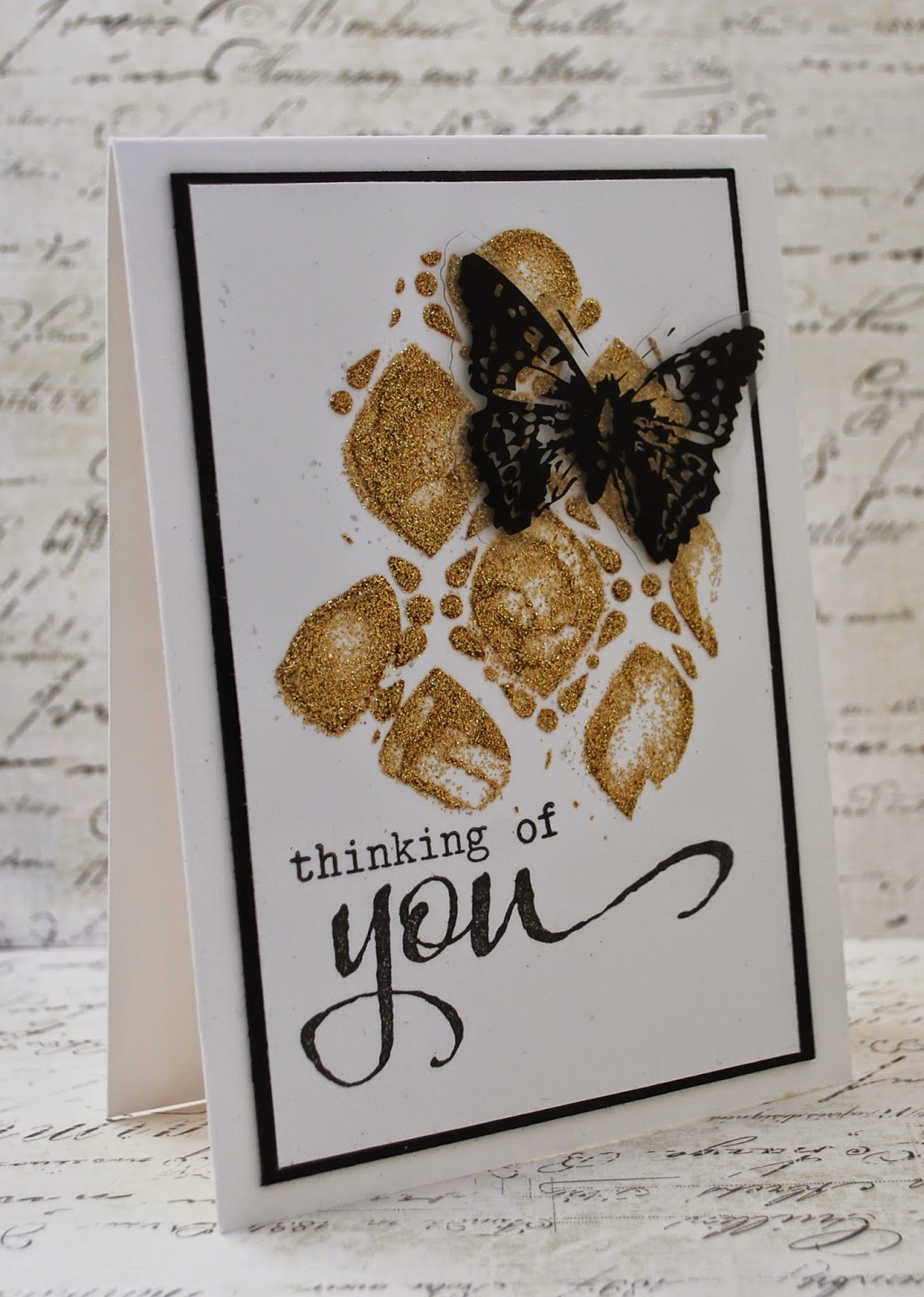 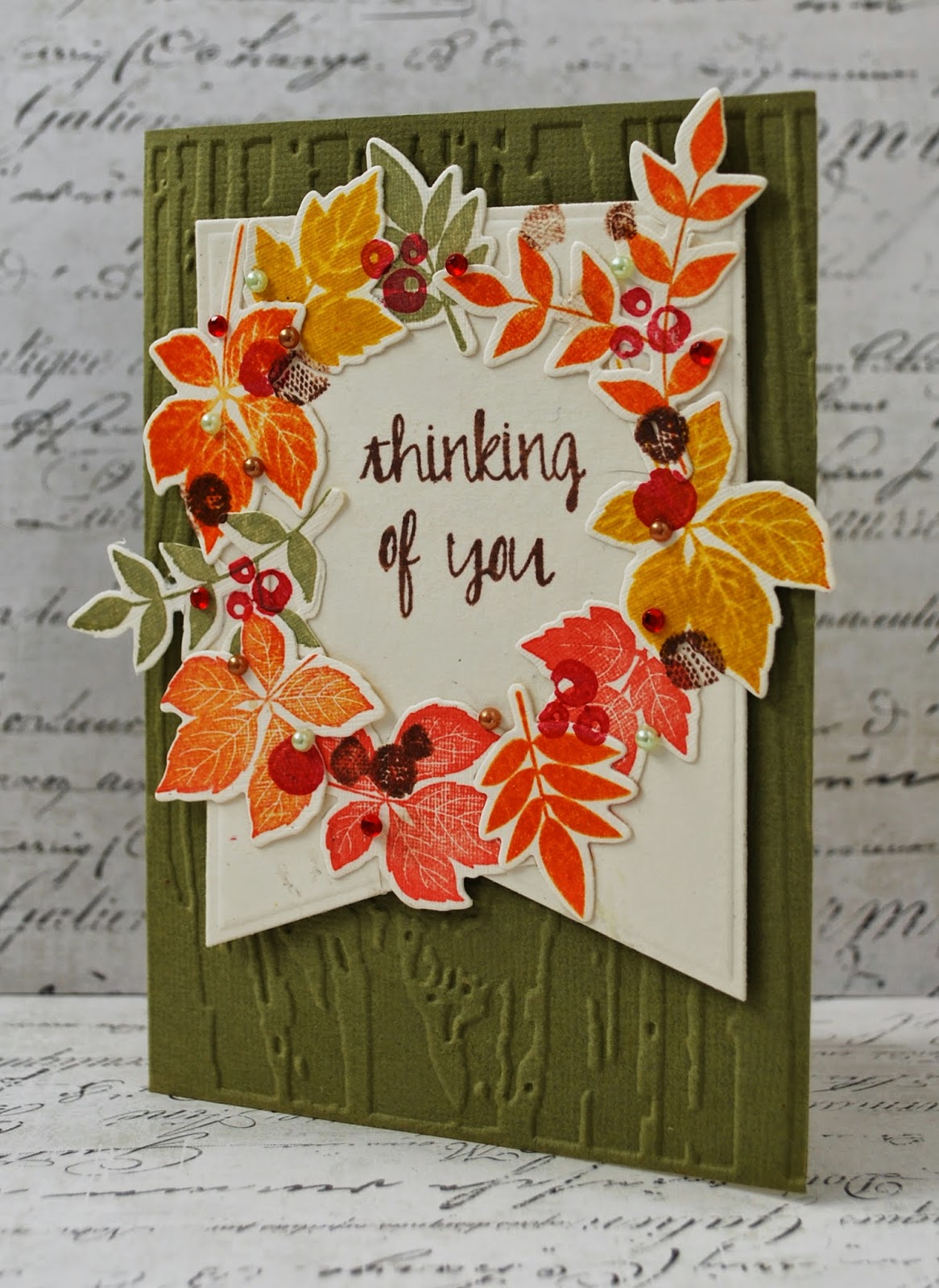 The sentiment comes in a set with lots of flowers and leaves but I used some Clearly Besotted stamp and die cut leaves and a mix of inks, plus berries and pine stamps from a Wplus9 set I have. I stuck it all onto a tag and was looking for some cardstock to mat the tag onto when I found this card base in the most perfect shade of green. Because it is from an old Self Addressed card kit it is an American sized card which means it is a better fit into an embossing folder - this is a Tim Holtz one. I scattered a few gems for a bit of extra bling.