I can't believe that September is just about over and my round of Harvest services begins. At the churches now we give our produce to the local Women's Refuge. It doesn't look as romantic with packets and tins rather than fruit and vegetables but we know that the food is much needed - and used - and I would rather be practical any day. We also spend a lot of time during worship thinking about other parts of the world where harvesting is a real struggle and think about issues of fair trade and what God's harvest for the world really means. All that in an hour!

But I also have a "crop" of cards and things to show you...
Firstly my daring card for the week
Jo set the theme of Tartan this week. I was fortunate to remember that I had some October Afternoon tartan paper. It is one of the other sides of the papers I used on the layout in the post before. As it was Jo setting the theme I decided to see if I could do a card in her style. Which is one of my absolute favourite styles of cardmaking in the whole world. And it is harder to do than you might think! What I love is her use of white space and the eclectic addition of little extras that give the "ooooh" factor 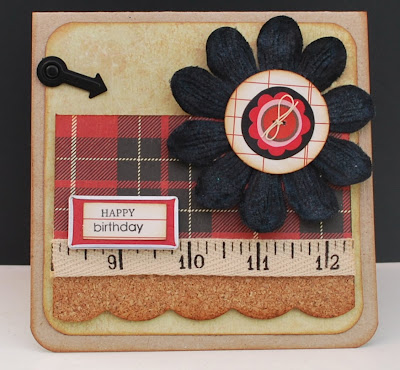 I used a kraft card blank. I'm still on the hunt for these in the UK. These are quite nice but they have ridges in (fussy much?)
The backing paper is a scrap from the Costco kit. The colours in that are a tad muted for my taste but the plainer sides make for great backgrounds. The scallop is from the Chatterbox embellishment bag which was one of the best value items I have ever bought! The twill tape I have had for years, ditto the Papermania metal tag. I added a bazzill bloom, love Elsie sticker, button and twine and a photo turn. It still isn't as good as the Mighty Jo's but I like it!

I have also delivered two classes to Imagine That so I will show you them here now. All of these things look better in the flesh (as it were) becasue they are all glittered to within an inch of their lives. I am trying to use as much Glamour Dust as I can as the world needs a little sparkle. 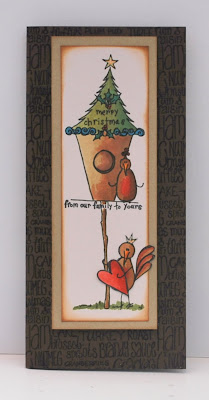 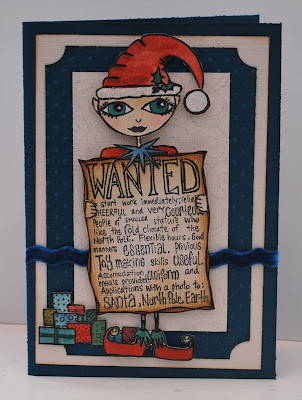 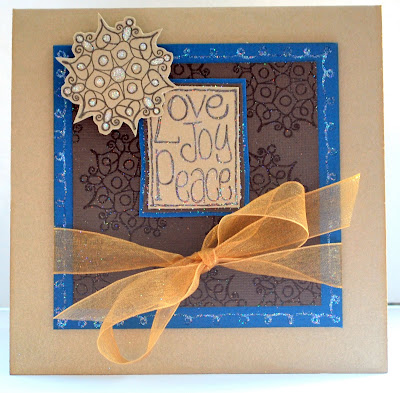 (Phil tied the bow for me as I can't do bows. Seriously. I have to make two loops which will do for shoes but not cards. Oh the shame)
What do you notice about these cards?
No patterned paper.
Somehow I didn't notice in the shop when we put the kit together. Only when I got home did I go "eeeeeeeeeeeeeeeeeeeeeeeeeeeeeeeeeeeeeeeeeeeeeeeeeeeeeeeeeeeeek". So I added my own patterns - on two of the cards by clear embossing with some of the stamps provided and on the middle one by drawing with glue pen and glamour dust. That elf is just head and feet you know. I thought about adding a dress but decided to hide her behind the sign instead! 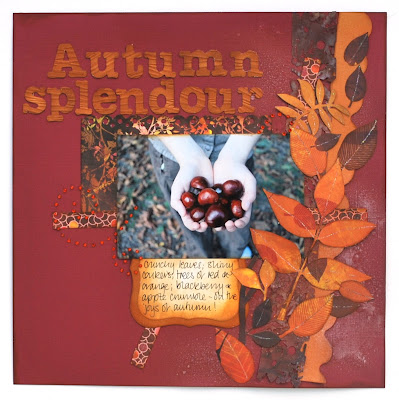 Gosh I wish I could have photographed this better. It is really sparkly. That grey looking stuff on the right hand side is in fact glimmer mist. Which was also sprayed on the doily paper and the scallop. And the middle of each leaf has a line of Glamour Dust. I was really pealsed with the lettering. Playground Sizzix letters were put through the Cuttlebug Forest Branches embossing folder and then inked with Spiced Marmalade; Vintage PHoto and Something Corduroy distress inks (all at the same time. I plonk a bit of foam into each in turn and am probably ruining them but I don't care). I did the same to the journalling spot (it was white) so you can see the change. They look almost woodgrain now. I think I might try again with less orange!

Right, must get in the mood to Plough the Fields and Scatter 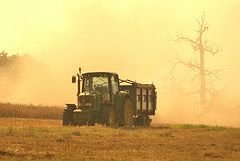 Phil took this photo near our house. And this one 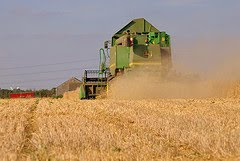 You can tell I live in a London borough can't you!

PS I am going with my DCM buddy Sue to Alexandra Palace tomorrow. Say hello if you recognise me. I am small and my hair is currently a Phil Oakey one side shorter than the other (a bit freaky as I had the same style at 17) - and I look a bit like this 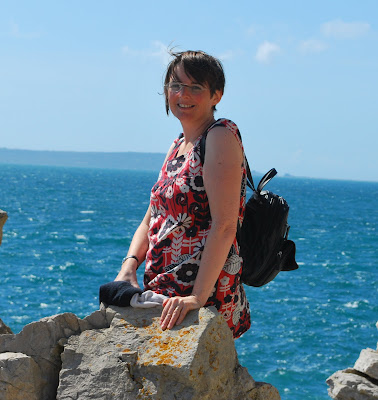 The tartan went so well on your DCM card - as Dolly said, certainly the right style. And what a feast of lovely crafting from everything you've shown. Wish I could meet up with you at Ally Pally, but it's not to be x

Wonderful crafting as always, Lythan and Phil's photos are fab too. I used to love Harvest Festival when I was little - in our village everyone spent ages decorating their boxes and baskets with crepe paper etc and all the little 'uns would make a procession to take them to the altar. I seem to recall quite a lot of falling and rolling potatoes etc as the boxes tipped...

I think your card is just fab :) and is definitely as good as any of my cards (as are all your cards!)

If you do find kraft cards here, let me know, I have been looking for aaaaages too :D

The closest I can find is 8.5x11 bazzill which makes american sized cards....