And then there were four

Hywel has settled well into Uni life as far as I can tell. It won't be full swing until next week (lectures at nine on a Monday tee hee) but he seems to be filling his time and finding his feet. As we have MSN and Facebook to chat on, we are keeping up with what is going on every day. He went to a presentation yesterday with a buffet lunch so he made sure he ate as much as he could so he wouldn't have to make tea. I'm so proud. 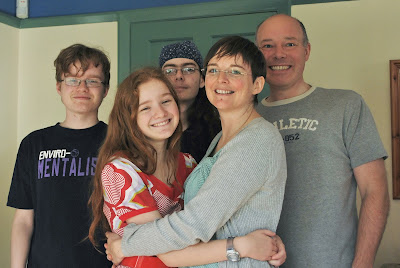 I'll have to scrap it as I think it is quite nice of all of us - Phil is giving his full cheese.

It is Salt challenge day today and Julie suggested a challenge about speech. I did take it and turn it into a reflection about all our behaviour - not just what we say. Do have a look at Julie's comments and everyone's take on the challenge as they are truly inspiring 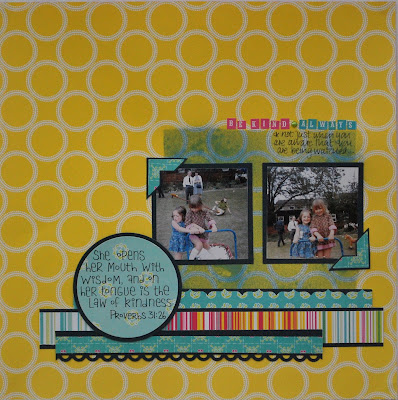 I had to use these photos. This is me and Anna age 4. Anna is Swedish and was sent three times by her mother over to stay with us to learn English. I have to be honest and say most of the time we were more like photo A than photo B! I used a Skissedilla sketch - apt as it is Scandanavian like Anna. I used Cosmo Cricket papers and masked and misted a square to layer the photos on. So that the papers didn't get lost in each other I added navy blue cardstock. The photo corners are a QK die and the circles and squares are Nestabilities. Also used - Fiskars border punch; Cosmo Cricket letters and a Prima brad.

Its a two challenge day for me tomorrow. So far only one is done and I am off to watch Carys skating with the Guides soon. (I'm taking some work with me as it is too far to drive and come back. But its not really the place for card making). here's hoping I'm inpsired when I return:)
Posted by Lythan at 6:15 pm

How fun to see the picture of your family!! and I love your layout - those colors are wonderful, just beautiful! :)

What a great and colorful layout. Love the cute photos!

Thank you for playing with us at skissedilla!