When H became 18 Phil and I kept saying "we've grown a man". And now it is happening for the second time as Em hits adulthood tomorrow. So where did the last 18 years go? 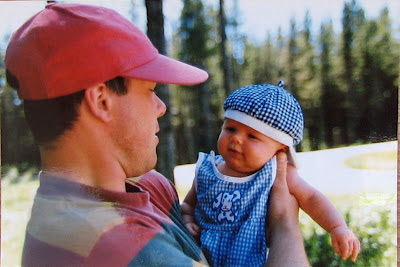 Here he is at about 8 weeks old. I remember him as an easy going baby. And he didn't cry much because, having had one already I think, I tended to know what he needed. This photo was taken on holiday in Canada. I wouldn't take Hywel out of Hartlepool for the first three months just in case. Emrys was on a plane at 7 weeks! He and H always had a strong bond and when he could talk (which was fairly late because H would tell us what Emrys wanted) often it would just be to add "and me, and me" to whatever Hywel had asked for.

He was a very photogenic child and in my opinion could have been a Milky Bar Kid. If we weren't boycotting Nestle at the time 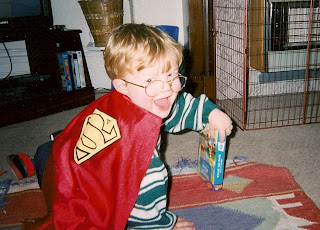 He was very fond of his capes. If he couldn't find one a tea towel would do. 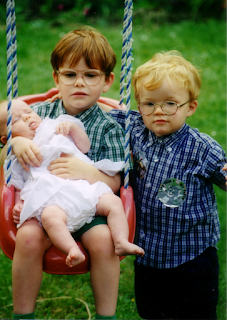 All the girls in year 2 loved him when he was in reception and they would wait for him to arrive at school so they could care for him! 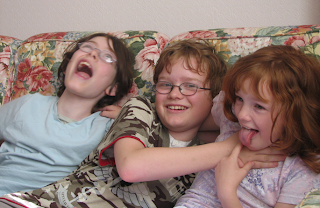 This picutre pretty much sums up how my three still are. They love to torment each other and spend a lot of time laughing 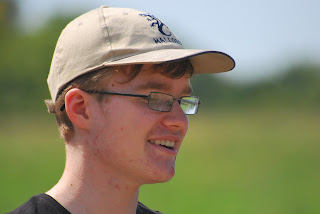 Now he hates having his photo taken and so they are usually shot with a long range lens. He is intensely private and very shy, but has a fabulous sense of humour, a keen mind, winces at bad grammar. And likes to keep us guessing. For example, Phil has (probably) managed to get some QI screening tickets and now that Emrys is 18 he could go along. We thought he would be delighted.
His response
"Why sit and watch hours of it when you can see the best bits from the comfort of your own sofa?" Fair point.
When I asked him (out of politeness as I was sure he would say no) if he wanted to come on a tour of the Harry Potter studios he said "Of course". I asked again as I was so surprised. I'm still not sure of his motives - might be just to tease his sister....

Emrys the enigma, Emrys the man who knows his own mind, Emrys who kindly allows us to find it hysterically funny when his name comes up on tv (Merlin and Being Human), Emrys with the dryest sense of humour ever, Emrys with a keen sense of right and wrong, we love you and salute you.

To celebrate my geeky boy (sorry, man) it was my turn to choose the dare for Daring Cardmakers this week so I went with the Geek theme. As ever, it proved more difficult to work out what to do for a card for my own dare than for any other! In the end I went Big Bang Theory - a geek classic in my opinion. I could have just used the printed photo that I cut Sheldon from but that of course would be too easy. I did however allow myself not to have to ink or outline all the little balls!
This is the card as it will come out of the envelope 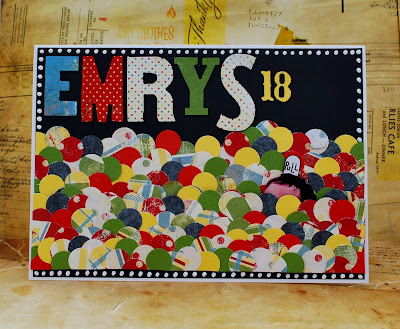 and this is what happens when you pull I used Marion Emberson and Banana Frog stamps, an old Daisy D's kit (which had several die cut words like "Smile" and "Birthday" from which I plundered the letters for the name. Strangely enough they didn't include the name Emrys in the kit). The papers are Daisy D and Bazzill and I used my favourite enamel accents to dot round the outside.

I thought I would be able to give you a Christian Aid collection update today but I have been laid low with a rather nasty cold and cough this week so have only delivered so far. I will do an evening collection tonight and try again in the morning (Emrys won't want to start his birthday too early!) so hopefully it won't be too bad
Posted by Lythan at 10:48 am

Wonderful card, Lythan - featuring one of my favourite Big Bang episodes too!! All the little balls cut out look just right - wouldn't have been the same if they were all flat and 2D. My daughter will be 18 later in the summer, it's a funny old stage!!

I hope you are on the mend - and that Emrys is having an awesome birthday!

Your card is just perfect :)

I think pop-up Sheldon is fantastic! One of the best Bazinga moments ever! hehe Fantastic card Lythan, and a fab dare. :D

Oh wow, Lythan. My son and daughter would both want this card. We love TBBT and cried laughing watching this episode. Happy birthday to your dear boy.