So here's the thing.
Last January I realised that one of my many (100 plus) moles was itching and bleeding. Not a good sign especially as me mam has had a few bouts of skin cancer. I went to the Doc who referred me to the hospital and I had two moles removed. One turned out to be definately a melanoma - but in the fairly early stages and the other was so small they really couldn't tell but decided that both sites should be excised (ie 1cm all around the site removed). Which happened last May. I now get examined at the hospital quite regularly (should go down to once a year. Eventually) And now I have another one waiting to be excised (though in even earlier stages than the first) and another mole that might change. It is better to be cancer free and have bits gouged out than leave things as they are - and it is something to be taken seriously, but I do feel as if I am going to be a cross between Gorganzola and Frankenstein's monster at this rate....
Which is all just a reminder to check your moles for any changes and do try and be sun smart. I am a prime candidate due to family history and having over 100 moles but any sun damage I have done will not help. You can be just as liable if you are not sensible with the sun though - so be careful out there! (OK so not a worry in the UK in January but even so!)

Anyway enough of me and my health issues (next week: hypothyrodism...) what about some crafting.
I have had a tough but fun assignment this week that I will share when I can but for now there are two Daring Cards to show you.
Last week we were challenged with the January Blues. As it was my brother's birthday yesterday and he is a massive Man City fan I thought this would be the perfect assignment for his card.
This is the Man City logo 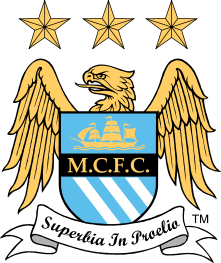 and this is my twist on it 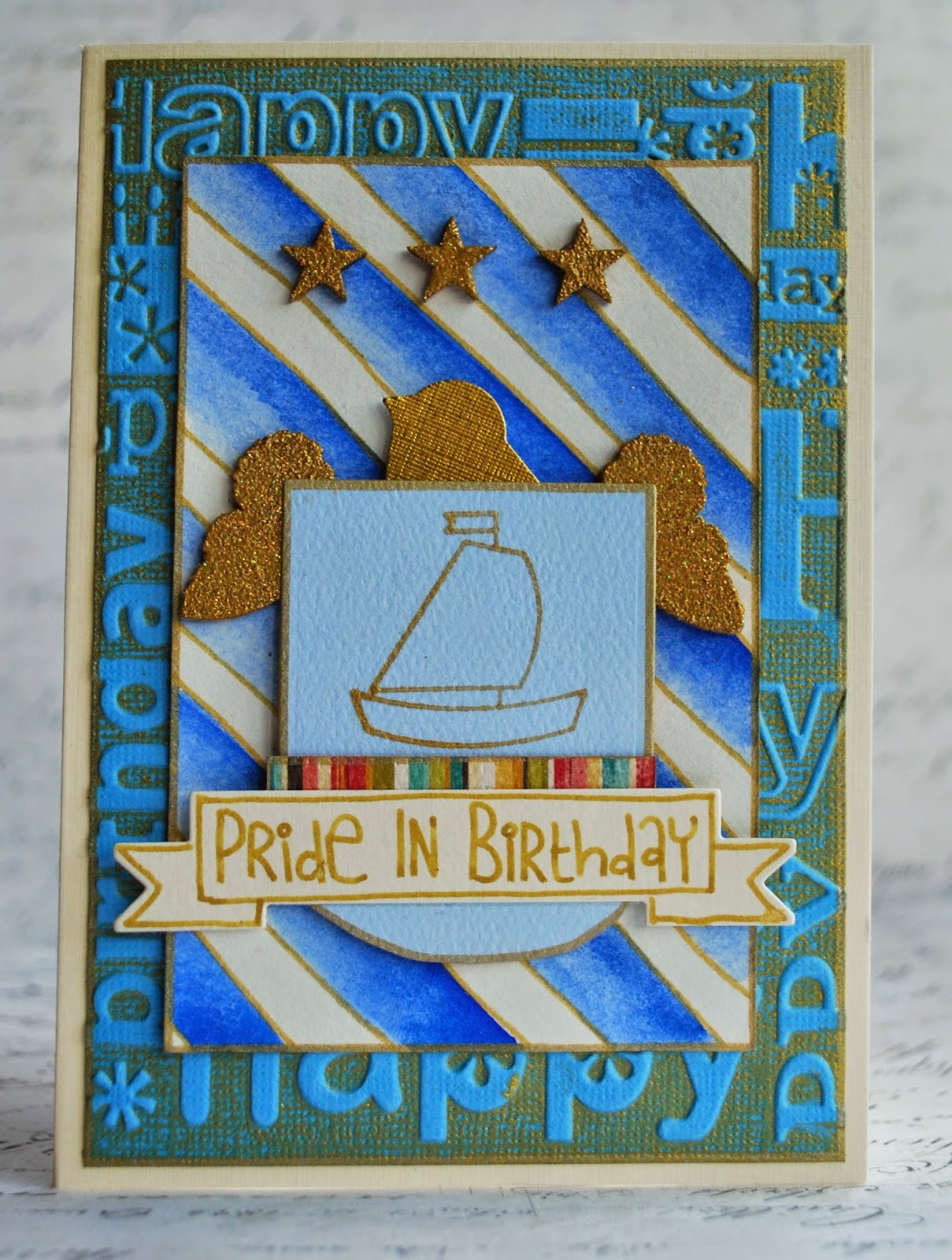 I turned a chipboard butterfly and a Stampin' Up bird punch with gold card into an Eagle (well, sorta) and added the striped background with watercolour and gold pen. The shield has a Papertrey Ink boat stamped on it in Delicata gold. The Clearly Besotted label has a handwritten sentiment using Krylon pen. "Superbia in Proelio" means "Pride in Battle".
Confession time: In my head the embossed background was going to be raised gold letters on a blue background. But that doesn't happen when you swoosh gold ink over this particular embossing folder. Ah well.

This week we have been invited to add a hat to our cards. Mine is mostly hat. 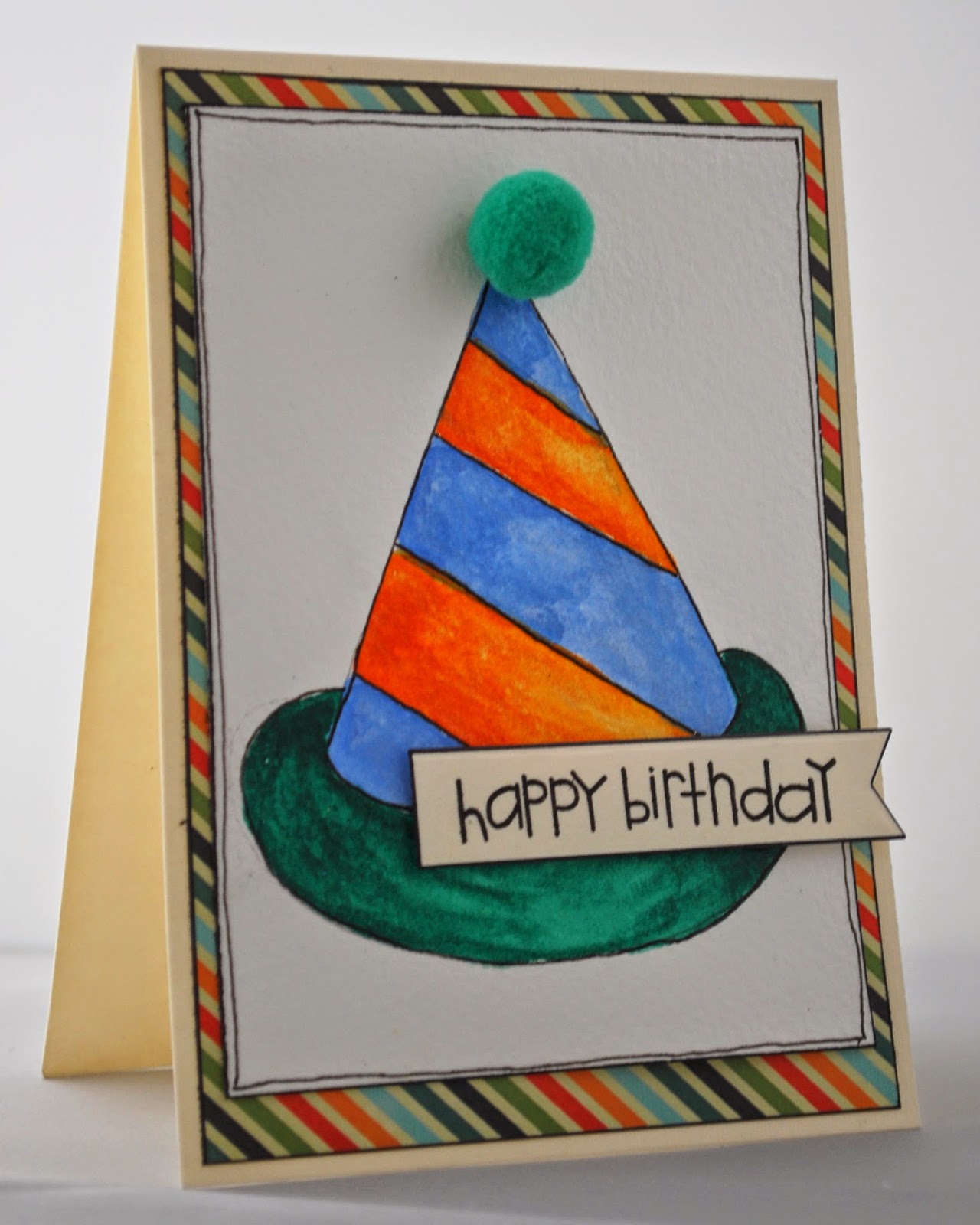 I knew that I had a packet of cute Basic Grey pompoms in my stash that I have failed to use because they are completely round and just look too big on a scrapbook page. So I decided to find some watercolour paints to match the pompom. I then discovered the Fancy Pants paper that had stripes remarkably similar to the colours I had been trying out from my lovely new vivid Kuretake watercolour set I had for Christmas (if only I was as good at colouring with watercolours as I am at buying them!)
I hand drew the party hat and painted it on watercolour paper.
Twice.
Because the first time I didn't dry each colour enough first. And then I tried that cool shading look under the hat and completely ruined it.
When this version was all dry, (note the sensible lack of shading) I went round the edges with a fine black marker and added Wink of Stella shine to the stripes but you can't really see that. I added the pompom with double sided tape and one of my favourite Paper Smooches stamped sentiments to finish it off.

Right off to stare at my moles again.... grumble, grumble

Hey Lythan. I'm also covered with moles and had two of them removed so far. Let's hope that we'll never miss one that changes or behaves funny =)
Your party hat card is great! The pompon looks great (I would love to touch it!) and your colouring matches the paper perfectly.

I really love the man city card although I think that that the eldest little J in the house here would disagree :) Love the party hat, the pom pom works brilliantly. I hope that the rest of your moles remain just as they should be (hugs)