baby it's cold inside

but not for long! (Although Phil is playing Christmas songs on his computer for some reason!) Yesterday my mum was complaining of the cold in our house. well she doesn't actually complain, just puts on her clothes, a dressing gown and a rug. We thought that she was just used to being in a smaller, warmer house but as the day went on realised that there was no central heating. There was hot water so Phil diagnosed a faulty pump in the boiler. He phoned our tame plumber this morning and 2 hours later he was at the house. 1 hour later we had a new pump and are toasty warm again. Mr Plumber I love you!

Though not as much as my Phil (Christmas music aside) who has bought me two wonderful CD's. Tracey Thorn and Ben Watts of Everything But the Girl recorded solo stuff in the early 80's and somewhere I have a tape with their EP's on. Phil has tracked them down on CD so I am wallowing in University angst and memories of the early days of our relationship. Bliss!

Today I have been with the kids to visit friends Anne and Lesley , who it turns out are friends with another friend from training college Ruth so we had a good girly chat and meal together while the kids watched tv. Phil was going to come as he was at training college with Ruth too but the thought of all the oestrogen scared him off so he cleared the garage instead. Man's work.

I have also had some time to play with the new papers that arrived yesterday. But not todays... Today I received the fantabulous new BG 6x6 paper pads. Yes all 4. What a paper tart I am.
Anyway here is todays work... 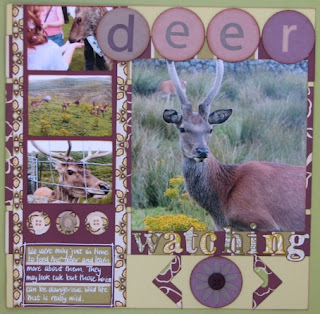 Paper Salon Tribeca paper (6 sheets plus 6 Bazzill for $4.20 in the Cool Blue sale plus a huge bag of toning buttons thrown in) Letter stickers from QVC album and card set. Coasters from old Self Addressed Kit - Chloe's Closet? 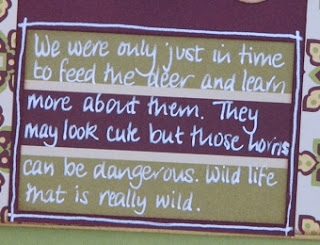 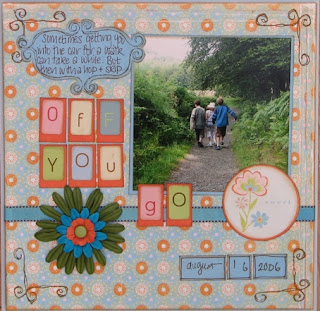 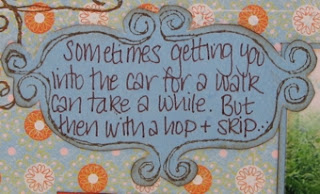 This is the first page I have done using a patterned paper background. Its quite effective i think. Phil told me it needed the flower and I think he was probably right!

well Happy Christmas from Phil's computer. (Although he is listening to Monty Python now) and it is dare day tomorrow!
Posted by Lythan at 9:25 pm