... And I made it through the week - just. Phew that was tiring. Really good. Really feel that it was full of worship. But tiring all the same.
I did manage to do two scrap pages though. I just had to. They were both using a lesson from the Design Collective. I'm really pleased with what has been sent through so far.
The first is a direct copy just about of the original idea. I was going to use other photos but then took these on Friday and needed to scrap them straight away. 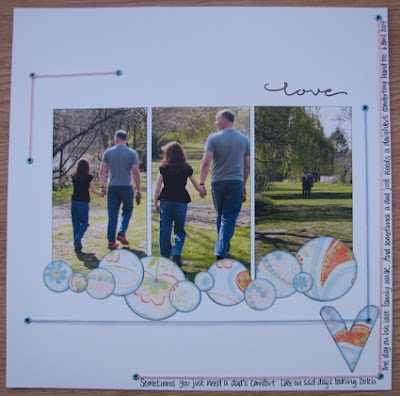 We took the difficult decision to have our dog put down on Saturday. we took him to the vet on Thursday who confirmed what we thought but sent us home just to make sure it was time. So on Good Friday after the Walks of Witness (two Ministers in the family means we can never do these things together), we took Dutch for a last walk round the fishing lake. He could hardly manage which showed us how right we were. But it still hurts. i took the camera so we could have some last photos of him. Carys was really upset and spent lots of time with Phil crying and talking about what she would miss about Dutch. So that is what this LO is about. it would have been called Comfort but i didn't have any black rub ons with the right letters left and I was not allowed to buy any new stuff (til today!) so used a sticker that i have had for ages. Paper is Crate paper carnival (I think)

I couldn't sleep Saturday morning so got up early and scrapped the photos I was going to use in the above layout. I played about with the basic idea (and ruled out setting eyelets at that time of day). Hearts instead of circles and much less journalling but the idea is still the same really. 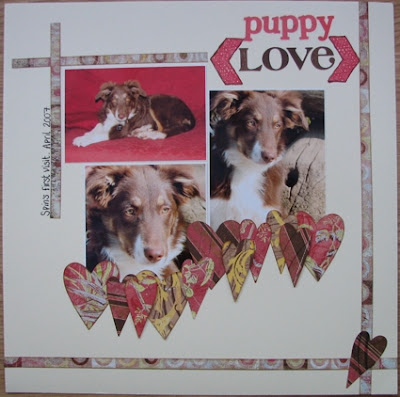 So we took a very tired and in pain Dutch to the vet Saturday morning. Carys, Phil and I went. it was very quick, very peaceful and the vet was lovely. We had Dutch as a rescue dog when he was about a year old. He had 3 owners in quick succession before us. As a young dog he was bouncy, naughty, grumpy and would go for other dogs if they came near him - even if they were bigger than him. But over the years he has mellowed a lot and has just been an important part of family life. He has never been a really affectionate dog, you still had to shout at him to get him to do anything and he would latterly love to lie in the middle of an open door or anywhere that he thought he would be in the way.
But he was ours and we loved him and are all very sad.Though happy that he is out of pain and running free and happy again.
Rest in peace Dutch. 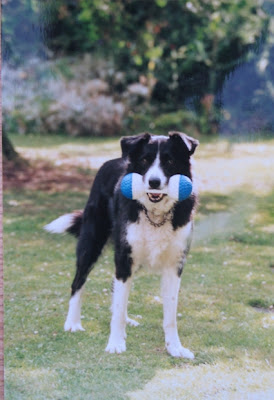 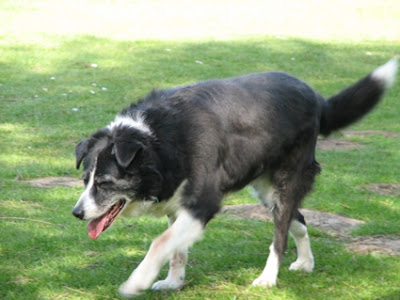 Sorry to hear about the loss of your Dutch Lythan. A brave decision you made.

Aww Lythan, I knew on Thursday when we meet briefly that you had to face this awful decision. It’s not an easy thing to do but deep down you know it was right and now Dutch is no longer in pain.

Sending you and the family loads of love and hugs at this very sad time.

I am really sad for you and the family.
Sending hugs and love

Oh Lythan - sorry to hear your sad news. Always such a hard decision to make. Had a little tear myself after reading this. Thinking of you. The layout is wonderfully done.

Sorry to hear this news. You're family must be devasted.

Awww, sorry to hear about Dutch. I do like that last photo of him though, the grey in him makes him look like a wise old dog.

It's so hard when you have to make this decision, no matter how right and kind it is.
Wishing you all lots of happy memories through the sadness xx

How sad for all of you and knowing the decision is right doesn't always make it easier to take it, does it.?

Sending love and hugs to you all.

Dogs come to be such a special part of a family and they leave a big space when they go. You know, I was absolutely terrified of dogs when I was little but my brother always wanted one and eventually the parents gave in. Bro was awqy on a school trip when it was time to go and collect our first puppy so I went with dad to pick him up. It was love at first site, this tiny trembling mite just taken from his mother - how could anyone be scared?
I know what you're going through Lythan and I feel for you and the family

have a nice day!