How much is too much

Its Daring day again
Cor this weeks dare was a toughie. OK it wasn't helped that I didn't read the rules properly. The wonderful Kathy set us this dare Shrink to Fit You are allowed to cover no more than a 5x5cms area of your card with paper or embellishment - the rest of the card must be left plain.

I read it as make a card using lots of white space. And made this one. 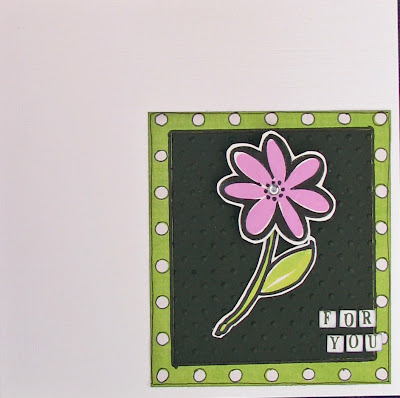 I used some Stampendous clear stamps with Colorbox Queue chalk inks. The flower was mounted on some black card given the dots treatment and then some Sassafrass paper. I added a bit of bling and some teeny letters. Yes the kind of teeny letters I was looking for. Jo Kill sent me to Rebecca's Scrapbooking Stash where I found some teeny letters. I bought a few other small bits and bobs and the stash came to me so speedily and with a lovely little packet of freebies. I heartily recommend the site!

Having made my card I re-read Kathy's blurb and created one that actually met the brief. 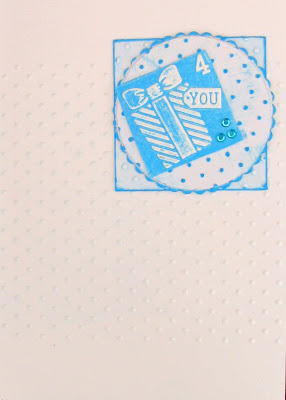 5x5 cms is very small you know...
White card embossed with yup - the dots! The top layer is an embossing folder which was covered in ink first. The next two layers were embossed and then inked. A few little gems from Hobbycraft finished it off. Actually strictly speaking it still isn't right as I was supposed to leave the rest plain and I made it dotty. Ah well.

We are having a good holiday. We did travel for one and a half hours to the Big Pit yesterday only to find there was a Museum Curators strike in Wales for one day. Who would have thought it. We still had a good time though. We went to the ruined ironworks instead where they have done up some of the cottages (and people lived in them for a serial shown in Wales last year). Blaenavon, where pit and works can be found, is now a World Heritage Centre. I do understand the reasoning but it does seem amusing when you watch a film about it which says " Taj Mahal! Manchu picchu! Stonehenge! The Great Wall of China! And a South Wales Coal Mine"...
In the evening we won the quiz. Those of you who are regular readers may remember (though I doubt it) that Thursdays in Swansea means the pub quiz at the New Inn Penllegaer. The highest we have ever come is third. But last night victory was ours! OK so there were less people there than normal but a win is a win right?
Last day of full hols today and then the essay is looming!
Posted by Lythan at 10:53 pm

Well done for winning the quiz! I love both cards - you're right, the dare is a toughie - I've just been looking and commenting - 5 x 5 cm is small!! (but I might try and give it a go). Enjoy the last day and then full steam ahead with that essay!

Loving your cards Lythan, especially the first one you made.

By the way, I've left you a well deserved award on my blog.

Both cards are great, Lythan, I used dots embossing too, still plain, I reckon!!!
JudyNZ

lovely cards Lythan, glad you are having a nice break

I love both of these cards Lythan.
Sorry you ended up having to do 2 - I feel really guilty.