I'm off out soon to do the first part of my MA coursework for this year. We have to do a Church Consultancy. The place I asked nearly bit my hand off and wanted to start NOW!!! We discuss how to do the first part next week at college... It is the sort of thing I know how to do really so I shouldn't be getting in a state. But that has never stopped me before. And then I have to run off to the second half of my church meeting.

I was going to put some washing away but decided that the blog was quiet and needed an update instead :)
I ran a class at a local Church on Monday. As ever, things were not quite how I had planned but they all had a whale of a time which was the most important thing. I had prepped a lot earlier and my Dreamkutz was so invaluable in cutting down sheets with ease. Tomorrow night I begin a Journal Your Advent 5 week course at Church. To complicate it I won't be there for week 2 so they will decorate the covers that week I think! I haven't got photos of either project yet as
1: isn't photographed
2: isn't started - that is tomorrow afternoon's job

but can show you some cards made for the church fair on Saturday. Except one has already been given as a birthday card. They mostly feature Kraft. And Cosmo Cricket Early Bird. Mmmmm I love it so.

Oooh I have obviously pressed a wrong button as the photos aren't where I expected! This card also features Papermania foam letters, a Martha Stewart butterfly, a Fiskars border and Woodware circle punch and I scrunched up the paper "ribbon" 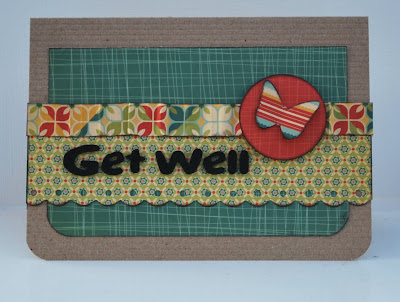 This is my fave! Paper roses and a Martha Stewart leaf punch and lots of Kraft space. I did add Happy Birthday at the bottom (and hand delivered it as it was so bulky) 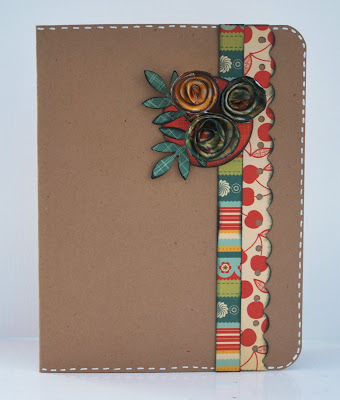 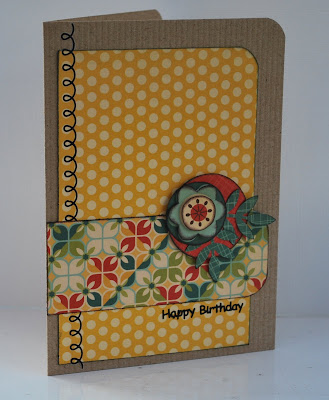 This is BG papers - Lemonade I think, a Craftwork cards sentiment and Candy dot thingy 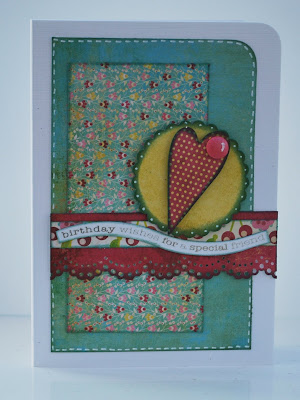 This one uses the embossing/inking technique, Christmas papers, that same punch and my best bow EVAH.
And another peeloff. 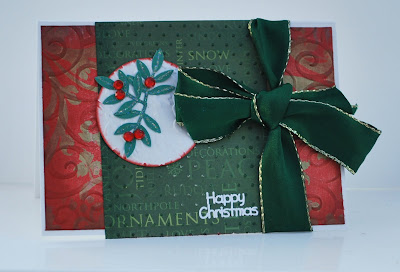 I have to make a few more cards for Saturday then I have a list of crafty must makes as long as my arm (that's even before the hand was nearly bitten off) and not a lot of time to do it in. As ever. Monday (my crafting day) I am teaching in Imagine That in the morning and going for lunch and sofa shopping at Ikea in the afternoon (we had hoped our sofas would last a few more years but just won't so we will be replacing them with something else that teenagers and dogs can wreck slightly. They have reached embarrassing proportions now though) followed by movie night in the evening.

And I must say thanks to Tesco Film as when I complained about a bonus disc being sent out as one of our choices (Still haven't quite worked out how to delete that as an option without deleting the film choice), they replied promptly and are sending another film too. That's the second time recently there have been issues (first one the film was rent in twain) and they have been impressive in dealing with them.
I would have moaned here so I will praise here.

And sadly, I've still got time to put that washing away...
Posted by Lythan at 5:47 pm

Ooh - journalling for Advent. That's a good idea. Or for Lent of course. I've got a very crafty bod in one church and a scrap-booker in another - wonder if they'd like to think about it... Will discuss more with you when we next meet! You clever creative person, you - and I love the Christmas card with the bow, BTW - class. x