This week we swapped England for the Land of My Fathers (and Mother). Because we are taking an extra weekend away when Phil's sis gets married in July we had to come back and work this weekend. (Sob, sob). It coincided with an anniversary weekend at our new church so its just as well as we would probably had to have come back anyway.

But the weather in Swansea was mostly good. I took some MA work to do as I have missed a few study days recently and so while I read, Phil went to Skomer Island to watch puffins. I love this photo! 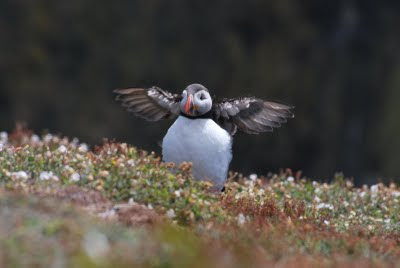 we will be near there in the summer so if they are still about I may have to join him. I did go out to the local Botanic Gardens to take arty flower photos though. 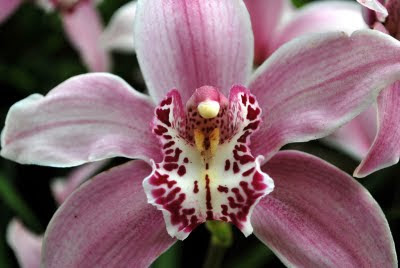 And we went on the obligatory trip to Verdis in Mumbles for ice-cream or toasted teacake. 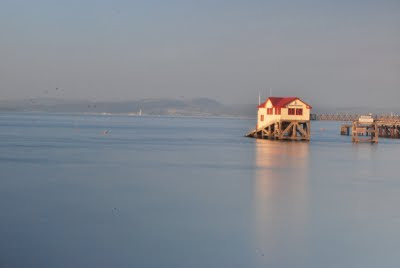 (Mumbles lifeboat house taken by Phil)
Carys managed a sleepover with my Goddaughter and her BWF (Best Welsh Friend) while I caught up with her Mum and we also visited Phil's brother who lives in the same village. Not bad for 5 days all in really.

We also enjoyed Welsh culture by watching the Urdd(Youth) Eisteddfod coverage (with English subtitles) and everyone laughed at me for being scared of Choral Recitation. I can't find any Youtube clips to prove how creepy it is but I find groups of people all saying the same words as if one voice and pulling meaningful faces very freaky. Love my culture. Just not that.

We came home on Friday which is when I made my Daring Card. Managed to photograph it yesterday and then write about it today! The theme is the flowers of the month which this time are roses or honeysuckle. I went the easy route. 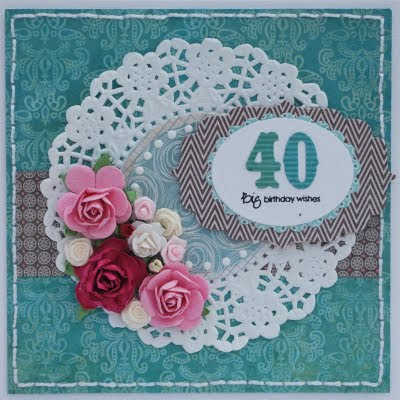 My other sis in law is 40 this week so hope she likes her birthday flowers! The card is yet again using my Stella and Rose pads from MME via Imagine That. Plus nestability and sizzix dies, an Imainge That stamp, lots of different paper and fabric roses, a paper doily, hand stitching and enamel accents.
Close up (slightly over exposed but I like it) of the flowers 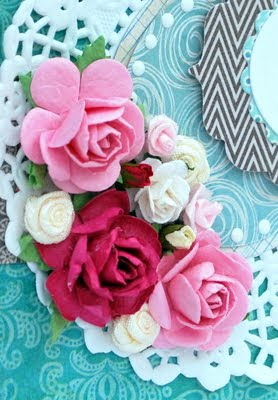 Here are two more cards using up the other MME papers that I have (almost done) I had an idea for using two nestability dies to make shapes within the card. Not unique but I was pleased with myself! 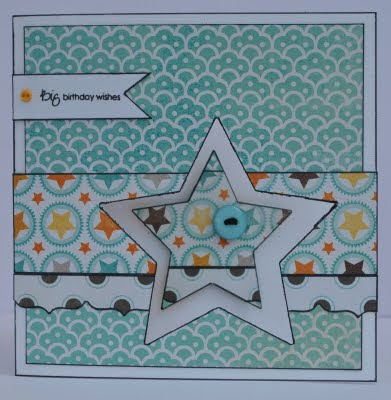 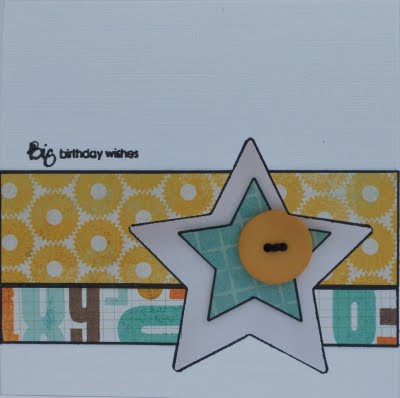 I found for the bigger one the pattern inside had to be the same as the outside but it didn't matter for the smaller one. Maybe the patterns I used? Anyway the inside stars are attached with foam pads. I expect I'll make a lot more of these. My mum has asked for some Get well and with love kind of cards so I shall make a few tomorrow and then it is back to the working grindstone with avengeance!

Today we celebrated Ascension Sunday and talked about how, although Jesus left his friends he promised he would be with them always, even in times of change. And featured the story of Who Moved My Cheese which is worth a look at (not religious. Not really cheesy although cheese does feature.) Its funny how we can often long for change as long as it doesn't mean we have to do anything differently?
Posted by Lythan at 3:41 pm

Fab card Lythan, and I'm glad to see you had such a lovely break - that Puffin photo is amazing. Love the layout of your card, the flowers are gorgeous.

See, now you've made me homesick! Lovely to think back to days at the Urdd eisteddfod: and I totally agree with you about choral recitation. Also found penillion a bit strange: harp starts with one tune, voice sings another - they seem to aim to stop at the same time... why??
And lovely cards as always! x

What fab photos Lythan - hope your break gave plenty of time for relaxing.
I love your beautiful DCM card and the stars look great too

Phil’s definitely getting better at this photography malarkey, isn’t he, I just love his photo of the Puffin. I always think they look so comical for some reason.

Your cards are beautiful always!

I’m planning on trying to do a card for the Daring Cardmaker’s this week……..…don’t faint Lol!

Love
Sue
X
PS. We really must try and get together again soon.