and now just about settled in Babbacombe. Home of the Model Village and Cliff Railway. Have now visited them both (although the fact of having 3 kids over 16 i.e. all paying as adults means I didn't enjoy the model village as much as I might have done as the thought of how much it was costing put a bit of a dampener on it. It was still fun though) 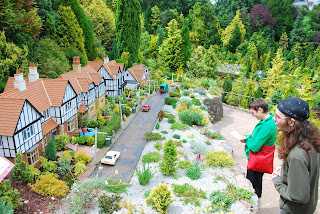 Look it was sunny!

This has proved to be rare since we moved. The bad news is this was our summer holiday and we were going to take unpacking slowly whilst taking time every day to explore the area. Some days we could not even see the garden. The good news is that due to the weather  and lack of broadband for the first week, everyone worked really hard and the house is 95% completed.

My craft space is even up and running 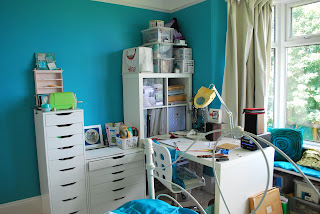 I have managed to cram what was spread out in a whole room into a corner of a fairly large bedroom. Result! The little welsh dresser will not stay pink. I painted it that colour when Carys was little but I have it back now (it was mine when I was a child) and it will be white and the little treasures that survived her childhood will be returned to its shelves. Oh yes.

And when I sit at the table, if the weather is fair, this is what I can see 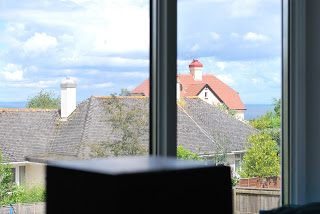 The brown thing is the speaker for my radio. The dark blue strip next to the house? That is sea, that is. And the tiny darker strip just above it? That is land. Probably Dorset. Babbacombe faces Portland which I find totally discombobulating as it should face out to France or Spain or something in my head. My head is wrong though. 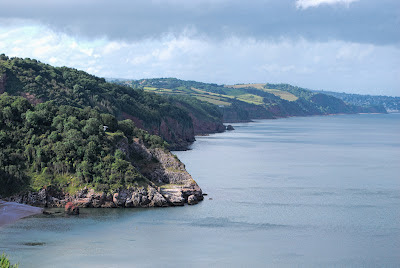 This was taken on a day following a rain storm when we had a double rainbow (more of that later). It takes longer than 5 minutes to walk down to the beach and I suspect even longer to walk up again (we took the cliff railway on the one really balmy day we have had) but Oddicombe beach is lovely. We didn't move because of the location, but I won't deny that it is a lovely place to live. Even in the rain!

I've dipped my toe back into crafting with two layouts 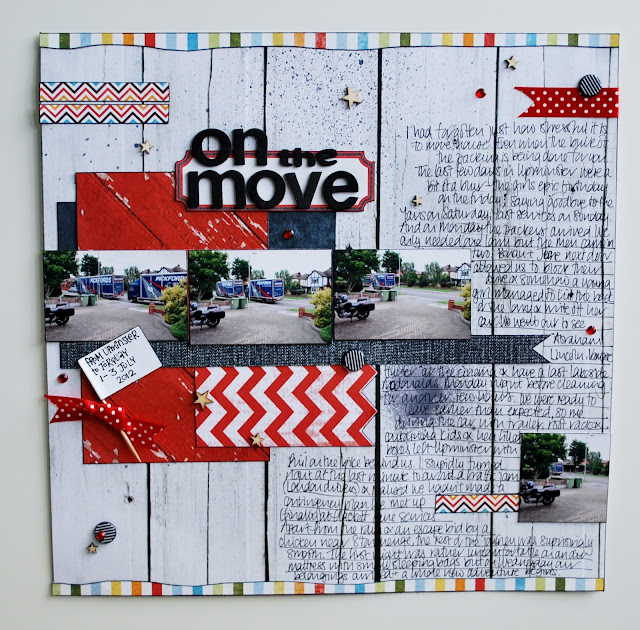 This one is all about the move. The photos were actually taken on day 1 where they just packed and loaded. There were two vans although all our stuff fitted into one. The journalling details the highlights of the move (!) - the fact that someone crashed into the back of one of the lorries parked outside our house (still can't work out how you can fail to spot a removal van); watching Abraham Lincoln Vampire Hunter (fun but v. gory for a 15 in my opinion) and then going back to clean until late on the Monday night; me setting off nervously with the trailer on the back of the car with Phil following on his bike and then rashly turning right at the first traffic lights at the last minute to avoid a hold up and promptly losing him which led me to complete panic (although I stopped worrying about the trailer) - he was actually ahead of us at Clacket Lane services where we were reunited. I am a Muppet, frankly; how one of the chickens made a break for it out of her box, fortunately when we had stopped at Stonehenge services and a few other details that it is good to get down on paper before you forget them. 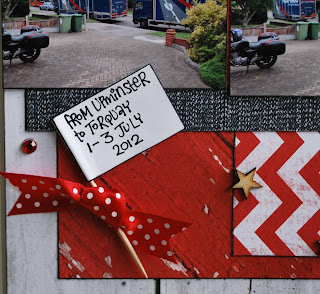 The papers are all MME and I used some v. old brads, red gems and some Studio Calico wooden stars and this little Nikki Sivils flag as well. Letters are Thickers and Papermania.

On the day of the double rainbow I first tried photographing it from the bedroom, 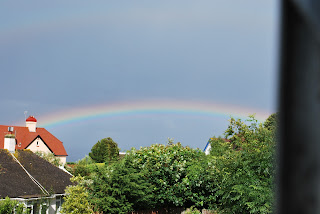 then rushed and told everyone about it. By the time we got out side to see it in all its glory, some of the rainbow had been obscured but it still looked beautiful over the water. And we stopped for some more photos 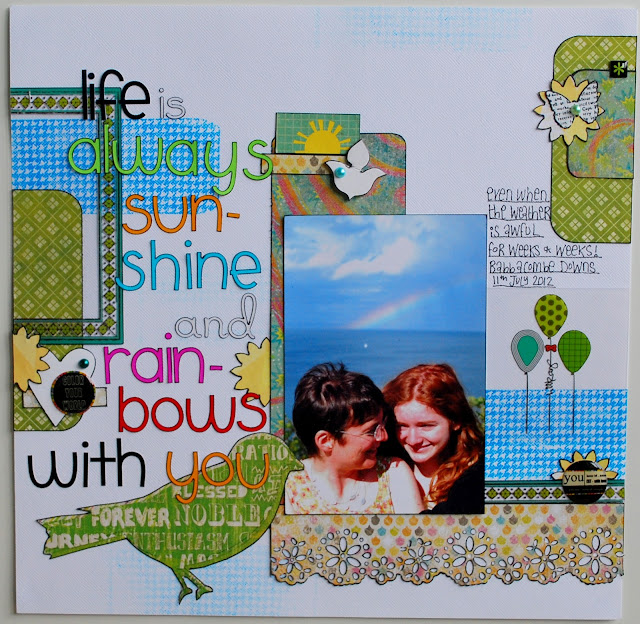 The rainbow over sparkling sea with a little tiny boat was just lovely. Phil took this photo of Carys and me. Not necessarily flattering of either of us but hey, that is what we look like!
I used loads of old stuff here - some K and Co and Scenic Route papers, lots of Doodlebug alphabet stickers (look how many colours I have thanks to working with Docraft in the past!), some Fancy Pants acetates and Christina Cole domed stickers (overlooking the american spelling of "color" on the left hand side one). Also used a sunburst flower punch, and some random odds and ends from the embellishment drawer along with a Martha Stewart border punch and a new(ish) border stamp that I have already lost the cover for so don't know who made it. Helpfully.

And now I am in Induction time - meeting people and trying to work out who is who in the churches and the community, ready for "proper" work after the Induction Service which is a week on Saturday. Hopefully there will still be time for a little exploring as well.

Glad you are all there safely. Like the moving lo.

Glad to see you've settled in so quickly - it looks like such a lovely place to live :)

Aww, it’s good to have you back with us Lythan and I’m pleased to hear that the move went smoothly in the end.

I’m loving your new craft space and am really looking forward to coming to see it for myself sometime in the future……..I’ll let you get settled thought before I turn up on your doorstep.

great catch up Lythan, sounds like the move went as expected lol

Fab post Lyth, glad to hear you are settling in - I guess the poor weather did help there - had it been nice you'd have all wanted to be out and about and you'd still be living out of boxes. At least now, when "the summer" does arrive you'll be able to enjoy it without feeling guilty. The craft space is looking wonderful and the crafting itself is fantastic - what wonderful LOs! Great photos too. I hope the induction goes well and that you are soon happy and confident that you're getting to grips with all things new.

Good to see that you are settling in and exploring the area. Good also that your craft space is up and running and glad you are already using it to create fab LOs. Praying that the induction goes well and that you settle into your roll there. x