well I've had a good weekend really!
worked hard and played hard which is always a good mix.
Didn't spend enough time with Carys (the boys are quite happy being left alone thank you very much - but she needs company) but I am slowly getting her into crafting so that she can come and sit with me rather than watch tv. I will have to change what I listen to while I craft (audio books have a lot of swearing you know!) but that is really no hardship.

Saturday morning was spent sorting out my evening service for Sunday. Saturday afternoon was the Romford church craft club. Now this has got quite successful - we get about 8 people coming and more adding on - not all church members which is great. BUT I provide all the stuff (from my stash which still doesn't get any smaller). I try and bring a limited range of things and show them a technique - but they mostly just like doing their own thing which means bringing oodles of stuff which I have to pack and unpack - taking away my own precious crafting time. I think I will have to buy another box (!) and just leave a set kit in there so I can simply add a few basics and something new to try (most are very stamp resistant but I am determined!)
At the other church the club is teeny - although someone else is starting this week. I have decided there that I am going to be more prescriptive and make up some kits so we can make one card and then if time, work on some other bits too.

Saturday evening I did my fastest layout ever. I have joined Bex's forum and the fun and enthusiasm is infectious! There are some National Scrapbooking Day Challenges and one was to take inspiration from an ad. I started the page just before Dr who and completed it just after so it was about 20 minutes in all ( and don't you dare say "and it shows") Its my first 8.5x11 (Amercian Letter size I think) layout and I love this size. I can easily print directly onto card stock too which is something I plan to use in the future. 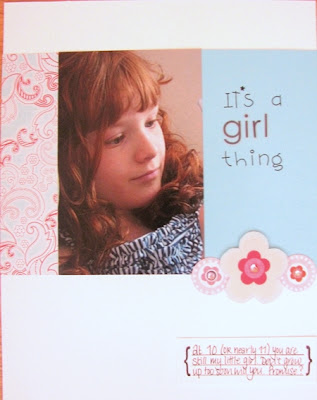 Papers are from the April SA kit. I used a Stamps Away journalling stamp, Doodlebug rubons and SEI letters plus three pink gems.

Sunday I squeezed another challenge in the space between morning and evening worship! This was to use a half page map. I found 6x12 a struggle but I think this is becasue my photoprinter had died and I didn't have time to set up the new one until Monday. I had to use prints which meant all the photos were really too big. I shall do another one though (why? So can can store two side by side in my 12x12 album!) 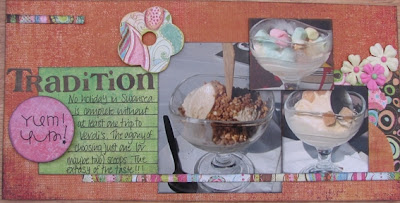 BG Phoebe papers and letters (mmmm my fave) Doodlebug rubons (guess what I just bought?), primas, brads, chipboard flower from SA kit.
family wise we watched the Return of the King. Once more the kids talked ALL THE WAY THROUGH.

Monday I spent wrestling with new printer (no probs really just me being dense!). My old one was less than a year old but as we used "compatibles" when the print head went wrong that was it. Decided to upgrade while Phil looked on ebay fro second hand ones. He skyped a printer then forgot to unskype it. so we now have two new printers. (If you don't know what skype is, it means that you can jump in with a bid at the very last minute)
Monday afternoon I did a chipboard class at Imagine That and great fun it was too. Emma is such a good teacher and the time flew by. In the evening I finished a layout for a compy and we went for a meal to nando's. Which i have decided is really a slightly more expensive macdonalds with more chicken. The kids love the unlimited drinks and frozen yogurt though!

I also discovered I didn't win Kirsty's scrap your hands comp. The one I thought would win did and I can totally understand it. it is powerful and honest as well as being good to look at - which sums up a good page to me. And though I would have loved to win all the prizes (natch!) looking at all the entries I think mine was a contender and as I have been scrapping less than a year I think that is an achievement. (Now that sentence sounds a bit full of myself but I am working on trying to praise myself becasue find it hard to do)
PLUS - it was the first scrap compy I have ever entered - and at least I did.

This week is a bit busy - and Phil will be away so i don't know how much scrapping/crafting time I will have. Plus the boys have run out of undies so I need to do some washing etc (or buy some new ones). I am trying to organize the house too - very slowly one drawer at a time. And I need to do a bit more of that (most satisfying!).

Don't forget to look at the DCM blog - and especially the comments this week as all the cards sent in are amazing!
Posted by Lythan at 9:37 am

:( You didn't win.... I thought after reading all that amazing journaling you'd get it for sure!
Love your LO's Lythan, I'm glad you and Carys are spending time together crafting.. My little miss and I are doing the same... it's so much fun isn't it!

gorgeous layouts. I have just done my first 8.5x11 on Saturday as my challenge for Aezine with ali Edwards. she has started back up after a break to write her book. I was so thrilled with it, & reading Cathy Zielske's first book about using lettering effectively on pages that I did two more. I too am thrilled that I can run it through my printer for titles. I do all my titles handcut & it is time consuming!!!! Must get some photos of the other two!!!!

awww, what a shame you didn't win - I'll have to go back and check the blog out to see what the results were later.

Your LOs are fab - but then that's nothing new, let's face it - everything you show here is fab, I just hope that some stuff ends up in the bin - you know, just to make the rest of us feel better!

Great layouts Lythan. I still think you have the most photogenic gorgeous daughter ever.