Guess what arrived at our house today?
The kids had a wii on order since january with no sign of coming. i started to haunt the wii locator blogs and finally struck lucky on Saturday. I kept filling in the form wrong in my haste to purchase the thing before it went out of stock again. (I've kept missing them by a couple of minutes apparently).
Honestly I am so proud of myself, I'm like a caveman who has hunted down a mammoth all by himself!
Haven't had a go yet - but will soon. And take photos natch.

I have had loads of parcels arrive in the last few days - I have to stop spending now! I bought two new albums as I have completed my 12x12 and you can't put any more pages in. (I have finished 2 8x8 as well but they are extendable). I bought some more bloomers in black and especially white so i can paint them. My cool Blue kit arrived which is awesome and as it was Scrapbooking day on Saturday Scraptitude offered 50% off everything so i had to get a kit from there which includes Hambly screen prints wot I have always wanted to try.
And I went to hobby craft and bought some more felt because suddenly it is lovely again. The spotty ones were bogof so i did. Oooooh and then I had to get my new diary in Smiths and they had sharpie pens for £1.
Its better than clothes... or food.

And also fitted in a great Elders Meeting at one of my churches. And planned a Bible study series called "My faith Scrapbook". Yup what could be better than combining the two loves of my life (outside the family) Jesus and patterned paper? I think it will be a lot of fun!

I leave you with the canvas Carys made at her friends party at imagine That. I have finally taken a photo to put on it. In some of the other shots she looks a little girl but she is a bit of a glamour puss in this one which is rather scary! I straightened her hair on Saturday which helps with the grown upness! 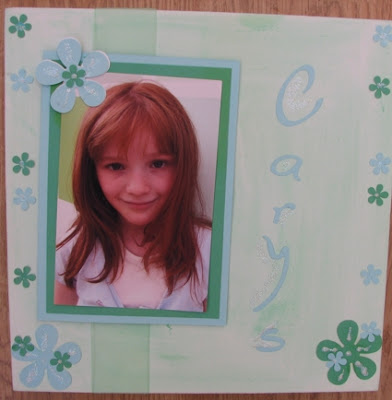 Must go to bed as Phil goes off to Prague at 5 in the morning. He is back Saturday night and as he is at a conference probably won't see much of that beautiful city. But he is flying business class on the way so I expect lots of photos of the comfy chairs
Posted by Lythan at 11:12 pm

Carys looks gorgeous in that photo and its a fab canvas.

Carys looks gorgeous! I suspect you already think that though!

Is Phil doing any beady shopping in Prague?