Oh what have I done?

Little C had one thing on her Christmas list. A kitten. And I suddenly realised that although I like other people's cats, I only like other people's cats in other people's houses. The thought of living with a cat made me feel quite ill. So I said that she had a choice. A cat or me. Which didn't go down too well. But better than it might have done as she is a very loving and understanding girl. Which made me feel even more guilty. She was still mulling it all over obviously as, on Saturday she suggested that maybe she could have a hamster instead. Now, I had been wondering about a similar compromise, so it made sense. But the one thing I know about hamsters is that they are very nocturnal so do not always make brilliant pets.
So I said something which seemed like a good idea but in hindsight I wish I had done some research before opening my big mouth.
What I said was this
"what about a Guinea Pig instead?"
BIIIIIIIIIIIIIIIG smiles from Carys.
BUT
within a few hours I discovered that apparently

Oh my.
they will be coming in the new year once my parents have gone home. To fit in with the rest of the pet household they will be rescue pigs. It is quite a trauma you know to be a really rather non animal person in an animal loving family.
Big H really wants a snake...

It is Salt day today with a great theme from Kimberley.
God is good
I was still thinking about the anniversary of my ordination. 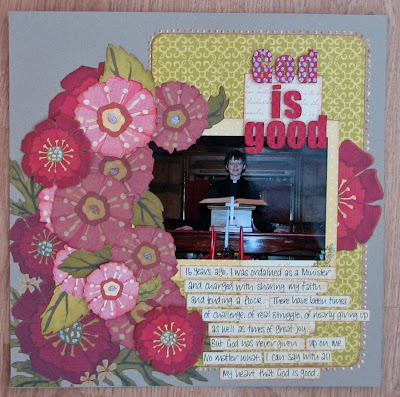 Told you I looked young! We have had problems with our scanner so I had to use an original photo. Eeek! Actually it was a spare one so that is ok. I am standing behind the communion table of my first church. The organ is behind me and advent candles in front. It was a wood heavy building.
The scrap details are these - all the papers are Scenic Route Sonoma, title cut with the craft robo and mounted on foam pads. Added bling and dots with Stickles and Liquid pearls.
Here is the jouranlling made easier to read 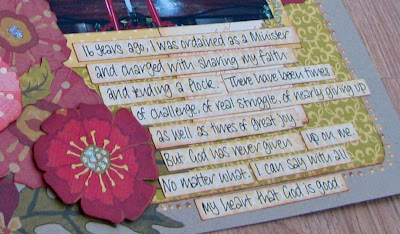 and some details including my cheeky chops 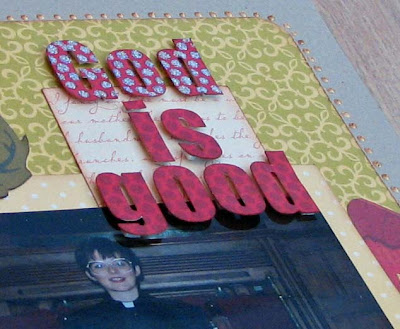 those glasses were v. fashionable at the time I tell you.
Do have a look at what the Salt girsl have prduced this time round as every entry has something great to say about how good God is.
Posted by Lythan at 10:12 am

Beautiful LO, such a testimony to your 16 years of ministry ... and many more to come. As for the GPs, a cat might have been the better option - lol!! There is no way I'd house a snake ... no way!

Congratulations on your 16 years. I used to have some glasses like those as well LOL

What a wonderful LO Lythan.
It’s hard to believe that you’ve been a minister for 16 years, especially as you look as thought you should still be in Primary School in that photo.

The guinea pig can live in an inside cage, which you can buy, so they can be moved up or downstairs..

Amen sister!
I'm a christian too :-)
Blessed christmas to you!
greetings, Ezzie