I was ordained as a Minister! Its an odd time of year as most people are ordained in June or July. I was later because I had a baby in August. We had my ordination and his dedication on the same day.
I'll try and scan in a photo later on as if you think I look young now - I think I looked about 12 then! (27 actually). Its gone by in a flash - although there have been times when I have felt like giving up and working in a shop. I don't know why that is my default of what I would do if I took off my dog collar but it is... But I'm still here and I think God has more work for me to do. I celebrated by going to a meeting in St Albans and in a mo' going to do a hospital visit. Life is never dull!

It was a huge squeeze to find time for DCM this week. It was not helped by the fact that the card kept going wrong. Honestly I had to throw away so many pieces! And it is not that fancy at all...
I loved the theme
we are dreaming of a WHITE (and splash of pink Christmas!) I would love you to design a card which includes white mostly (ie: snow, snowmen etc ) and also a little splash of pink somewhere on the card. :)
and had a clear idea what I wanted to do. So why was it so hard? 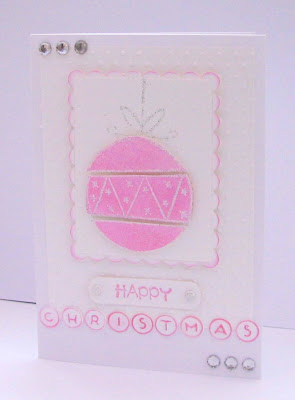 I think it is down to my stamping and embossing. I stamped this image so many times and found it hard to get a clean image. I embossed with a tinsel white and then smooshed over an opera pink chalk ink. (Hint: if you want to use some sponge for this use a clean but and not the clean end of a used piece otherwise you will get an orangey hue and have to start again). I layered two ornaments together, used nesties to frame it, then my fave cuttlebug embossing folder. The word "Christmas" is also an embossing folder, inked and cut around. "Happy" is a PUrple Onion stamp and the two brads were embossed with tinsel embossing powder. Poundland bling finished it off. And what nearly finished me off was trying to get a decent photo. Still not brill. Grrrr.

I have an awfully busy weekend and pretty busy week so if I don't manage to comment on your DCM contribution I do hope you won't be offended. We do love each and every one of you who play along with us - it is what makes being part of the team so much fun.
Posted by Lythan at 3:53 pm

Congratulations on your anniversary today Lythan.
Love your card..I haven't had time to join in with DCM recently. I'll try to change that over the next few weeks as after Monday all my hard work will be behind me! (Crosses Fingers!)
Anice xx

Great card Lythan and congrats on the 16 years here's to many more years working for the good of God. Pascale :)

Congrats on 16 years in ministry - hope you'll be blessed with many more. Love the pink card. xx

Congratulations on your anniversary of becoming a minister. :)