I had a snippet of good news today - I had a really positive result from my Christian Aid collecting - £66 and some change plus enough people gift aided to add an extra £22 on top from the government. It makes it all worthwhile so thank you generous residents of Tawny Avenue, Upminster :)

I've been mostly working today with a break in the middle to go back to the top of the Bejewelled Blitz league on Facebook (only amongst my friends, not a national champ or owt!) I have become amazingly competitive about it along with Emma from Imagine That. Truth is there is as much luck as skill to the game and I get low scores as well as high ones. I just don't mention those! And I'm working tonight as well. Ministry is a great job in that it is not fixed hours but it is also a lousy job because it is not fixed hours. three nights out a week for work stuff does not make me a happy bunnykins. Still next week it is a theatre trip one night and a catch up with my uni mate Anna at that weekend so can't complain. (Still do though...)

Here are the cards that I made on Monday with Sue H. Well I made them while she was here, it wasn't a joint effort nor did I use her hair for embellishments or anything. Hmmm, looks like that MA speak is already in the dim and distant past again. Anyhoo here they are. The first two were inspired by cards in Card Trends June. I bought it to celebrate handing in my MA essay! They don't look much like the cards in the mag though 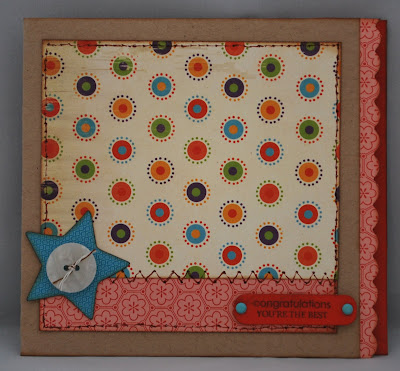 this one uses up snippets from the Studio Calico kit I won. (Oh how I wish I could afford the kit every month. But I have just read a book about kids going to Uni and it has struck home that the next 10 years or so are going to be really tight as we put three kidlets through University. SO I will have to curtail my craft spending big time!)
The stitching is all pretendy; the star is a Chatterbox die cut I bought to be shipped with the kit; ditto the twine tying it; the button is from Imagine That as is the sentiment stamp and the brads I have had for years 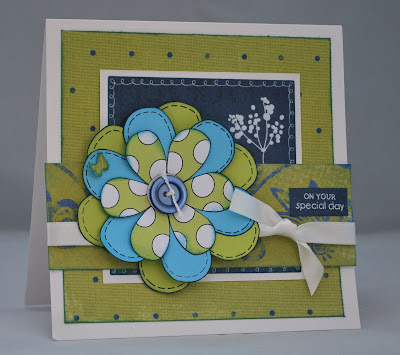 This one uses one of the Polka doodle flowers that I won teamed with some MME Magnolia paper. The papers are slightly more shabby than the flower so I inked that up a bit. I added some doodles, a teeny weeny butterfly; an Imagine That sentiment stamped with white chalk ink and a Basic Grey rub on

And the last card I made on Monday was a Kathy Black sketch special! Number 11 in fact 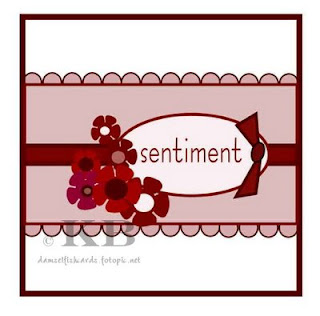 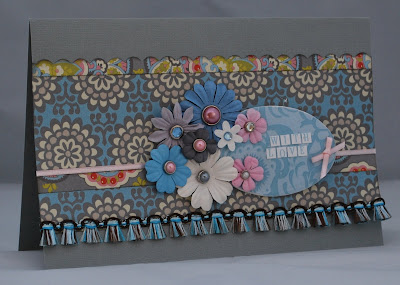 I kept pretty much to it. I used K and Co Amy Butler papers and card with an American Crafts grey cardstock base. I'm loving grey bases at the moment - will have to buy more grey bazzill I think! (but only a little, bearing in mind note re purchasing above). The oval started out as blue chipboard with gold around it but the gold wasn't to the same thickness all over so it ended up getting covered with patterned paper and painted. Yes, in that less than sensible order.

I then added some really thin pink ribbon and lots of flowers with gem brads in the middle and teeny Adornit alpha letters. The trim is WRMK Tiffany. Having made the card I am itching to take those gem brads off - it is too much of a splurge. But what I might do is add "on Fathers Day" to the sentiment and send it to my dad. He deserves lots of gem brads even if he doesn't appreciate the sacrifice!
Posted by Lythan at 5:31 pm

Fab crafting, as ever - good to see your gorgeousness again. x

hehehe you always manage to make me smile Lythan - I love the way you tell it how it is - I don't believe we're the only ones who get in such a stress about the things we add/don't add to our cards - its comforting to know that someone else agonises over each and every sparkly brad (and whether to use so many on a single card....)
All of these cards are fab - and I adore that fringing stuff on the skeetch 11 one

Great cards and like Kathy I'm glad it's not just me who is agonising over craft spending - having just written a cheque for 2 sets of school uniform I'm smarting slightly and can't really justify the big shopping basket of patterned papers and embellishments I had all ready to check out!

I had a fab day crafting with you on Monday Lythan and I’m happy to report that my hair ‘is’ still attached to my head Lol!

I absolutely love the cards you made, especially the Blue and Green one with the big flower. I know weren’t sure about it but I think it’s stunning!

Beautiful cards Lythan. The grey base on the last one works beautifully with the papers. And the gem brads are gorge! Even if a bit of a splurge. :)

Hehehe! Nice to know that i'm not the only one that thinks that more than one or 2 pearl brads on a card is a splurge!!

Oh beautiful makes. Well done on the charity work fab news. I'm with you on the craft spend, I wish I could step back too. I want everything, it is a marketers dream :) It is so tough not spending on craft isn't it? Well good luck.
Kim

The studio calico set is truly fab. Love all these cards, you're sooo talented and an inspiration. I'm such a miser with the gem brads they're still in the packet!
:)x