even birthdays! when it is with someone as beautiful as she is. 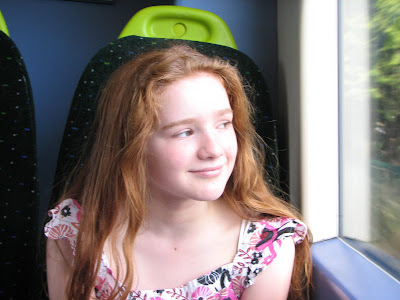 And she is, inside and out.Although it is always nice to have a day all about "me", ever since she came along (and if you have followed my blog for a long time you will know she is exactly what I asked for - a girl with red curly hair to be born on my birthday) and has been old enough to realise we share a birthday she has always made sure I am included. So any happy birthday given to Carys she would say "and mummy too".
There did used to be one downside... children's parties.
Those of you who have children will know what I mean. Those who don't - NEVER volunteer to run one in my opinion!
But we are jsut about beyond that now and instead Carys and I took the train 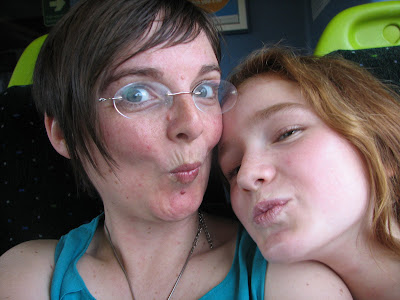 and goofed around. Shopped a little in Oxford Street and then went to see 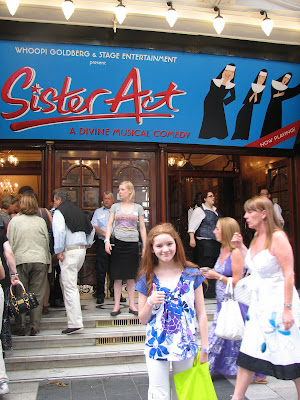 (note Carys is already in a different top). Sister Act was so, so fab with the campest of endings.
It finished jsut after 10 and it was sooooo hot on the way home as well as a slightly late night for a school night. But Carys had a trip to the Globe the next day so all fine.

Thanks for all the birthday greetings and cards. I'm hoping to have some time to photograph them tomorrow to show what creative friends I have! In the meantime it is July already (eek) which means it is Get Funky Challenge Day. The theme is
Something New
which is apposite as I have been playing with something new - a new Funky Hand CD called Colour Me Happy which will be launched ever so soon and trust me - you will love it! I went for a New Home card 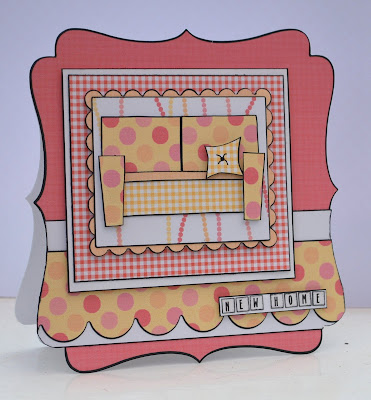 The sofa is based on a design from a Nikki Sivils paper which I paper pieced together and added the cushion. Everything has a black sharpie border to give extra definition to all that pattern and I also added a little white card to break the patterns a little.
Other things used - Paperartsy frame die for the card base; Nestabilities square frames; Papertrey scallop die and Adornit letter stickers.
Posted by Lythan at 9:27 am

She is lovely - a real credit to you. Glad you had such a good day together - teenagers get such a bad press, bless 'em. x

I just love this Lythan, so clever. Glad you had a great birthday. :)x

It's such a fab card Lythan, and all the black lining makes such a difference - rally makes the paper patterns pop from the page/

Carys is growing up so beautifully, no wonder you're so proud of her - and how fab to be able to share birthday treats now she's older, makes the day so special for you boith

This is one super cute card, i love it! xx