I love the smell of washing on a line. Although I don't like cripsy towels. Somehow I have managed to forget about washing for a few days again. Which means that mountains of unmentionables greet me as we are now almost all adult size in terms of clothing. Don't mind the washing or folding. Hate the putting away which is stupid really as it doesn't take long. And actually my dear boys could do their own as they are busy doing nothing at the moment. I keep thinking of all the things to train Hywel in before Uni and how to load a washing machine is one of them! This perambulation comes because in the 10 minutes before I make my tea* I should be hanging up more washing and checking for dry things but chose to blog instead. Cos I be lazy.
*Friday is usually "Pie Night" but as Phil has a wedding rehearsal it is an "Ownsy Tea" - I'll be having noodles and tomato sauce, two kids will have tomato soup and I guess the other two people will have beans and cheese on toast even though one had that for lunch already.

So ... it is Daring Cardmakers day. Really thought I wouldn't make it as I've had quite a heavy week. A lovely chap in the Church died a few days ago and although there is truly much rejoicing as his suffering is over and he died peacefully with his family around him - I shall miss his big personality. Reg wasn't Welsh by birth but certainly was my equal in terms of love of music and being able to cry at anything! So I wanted a card for the family that summed up both joy and sorrow which must have been on my mind subconciously as I though about what to do for the dare set by Rein of Silhouette.
Isn't that a fabulous word? 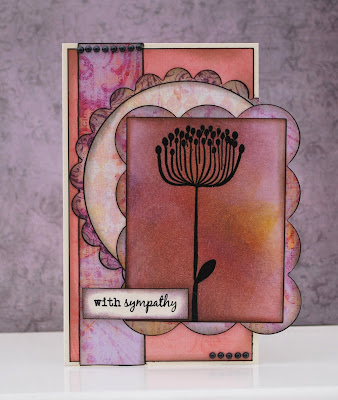 The papers were still out from having made this layout 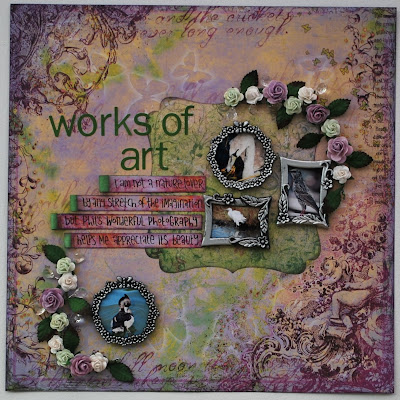 I still can't really do justice to Prima papers but I'm quite pleased with this. The frames I bought from Poundland having seen the shopping tip on Its All Fiddle Fart which is a most inspirational blog. The frames have magnets but I removed everything but the frame which is very light indeed. I also used pearls and flowers from Wild Orchid Crafts. Here is a close up of a faux Prima branch 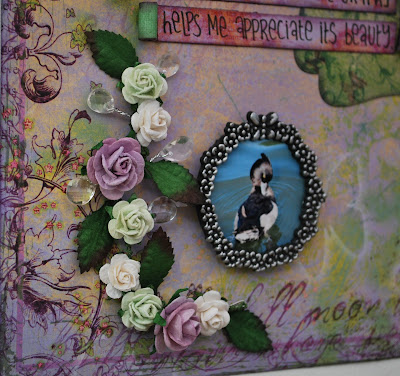 Right must do that washing!
Posted by Lythan at 6:13 pm

Totally stunning work Lythan - your card is so beautiful and special and the layout is stunning.

I do love that card - the different sizes of the background and the gorgeous colours make a fabulous backdrop for the pretty image. It all makes a very special sympathy card.
The LO is lovely too - different from your usual style, but just as inspirational

love them both- fabulous colours
Allisonx

Stunning Lythan, both the card and LO. Is smooshed a word? It is now, I have added it to my vocabluary from this moment on, so descriptive.....
Those poundland frames are just gorgeous, running down there now to see if I can find some..
big hugs
En xx

Poundland is very fab and I must have a look for those very frames! Jacob doesn't like the scratchy towel situations either.