I am a prat

A week ago I was given our tickets for the Sound of Music in January. I was so worried about losing them that I decided the safest place to keep them was my handbag. Today I went to look at them again (I am rather excited you know). No tickets. Phil tried to convince me that I hadn't left them in my bag. But I had. Now my work desk is very untidy. As bad as my craft desk actually. But I was sure I hadn't taken them out and put them on there. And there was a teeny chance they might have fallen out of my bag in the car on Friday when i took Hywel to the orthodentist and asked him to get my diary out.
BUT
I was so sure I must have pulled them out with other stuff and dropped them that I couldn't bear to have the worst confirmed that they were not in the car. So instead of looking I spent the day in absolute bits - almost literally sick. 10:30 tonight Phil had had enough and went out to the car. Guess what he found?
They are now on my notice board so please, please make sure I put them back in my bag on the day!
Phil is now happy because I owe him one (as it were).

Other news... concert in which I played the harp yesterday. Pratty nerves once more meant that I didn't play it like I can. But the good thing about a harp is that unless you stop playing altogether most people are enjoying the sound without notcing all the wrong notes (and there were quite a lot...) The conductor is happy for me to play with them again so it wasn't a total disaster.

Oooh and before I do a craft reveal (you see I like to keep you hanging on and don't you dare just scroll down to the photos) I was out all day Saturday at a London Summit for the United Reformed Church. It was a great day because so often these days we seem to be talking gloomily about the future of our denomination but this was a day full of hope. And I also discovered that the guy playing the piano and who sang a solo is Mr Banzai. Well his real name is Masashi but he was Mr Banzai in Banzai which was one of the funniest tv shows ever. I'd never have expected him to be part of the URC!

Today I have been mostly crafting (to take my mind off the missing tickets). I am ready for Fridays Dare. I have to do mine early in the week because it is my only large amount of free time. Can't show you those, but I have also made an exploding box for Phil's Auntie Jones for Christmas. (She is really called Joan but Carys used to think that she was Jones because we would say Joan's this or Joan's that and the name stuck). It has in it all her neices and nephews and their kids. Not their partners because we can't all fit due to us having three kids! 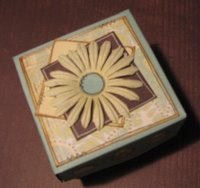 late night piccies so bear with me. All the papers are birdie by Crate Paper. 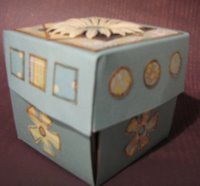 And it doesn't actually bulge that much. 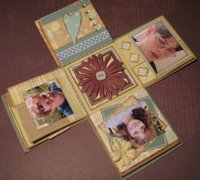 The central pages with my kids on. I enjoyed making it but it was harder work than I expected. Only another two to do!
I'm still a prat though
Posted by Lythan at 11:23 pm

whooo hoooo Lythan I am a founding member of that club too. I have safe places and thats where my problems start!!! Am pleased you found them though......Janine from NZ

Love the box. Those papers go really well with your photos don't they.
If I were you I would photocopy those tickets & stick a big sign on them saying THESE ARE NOT ORIGINALS, DO NOT leave home without them. Bluetack this to your front door.....works honest!!!!
Can you tell I've been here before??

Yep I know all about he really safe places..that you can NEVER find again!!

Your box is so beautiful I am thinking I may have to attempt it you know!

Im sure Aunt Jones will be thrilled with it oh and well done you for your harp playing thats really brave of you!

I have some of those 'safe places' too, they are a pain when they go missing :/

Don't worry we've all been there and done that and some of us have the t-shirt, the cap and all other accesories... Love the exploding box - do you have the instructions cos I'd love to have a go sometime?

Joan is going to love your box. You've started me off as well now. Will have pictures soon.

Oh dear, looks like we're all victims of Safe Place Syndrome......
The box is fantastic and I'm going to make one - eventually!
Glad the harping ;-) went well and that they are prepared to have you back! I was always a nervous wreck when I had to play piano in front of anyone - I think that's part of the reason I hated having lessons and eventually made the folks' lives such a misery over it that they let me give it up.

My house is full of safe places too, obviosly they move around without me knowing! Great to hear its not just me though. Love the box, what a fab prezzie, Rhi x

lower down - the pic of Carys and the fish...

the fish is not lifesize... clown fish are much smaller than that.. :-)

I love these! You did such a wonderful job!